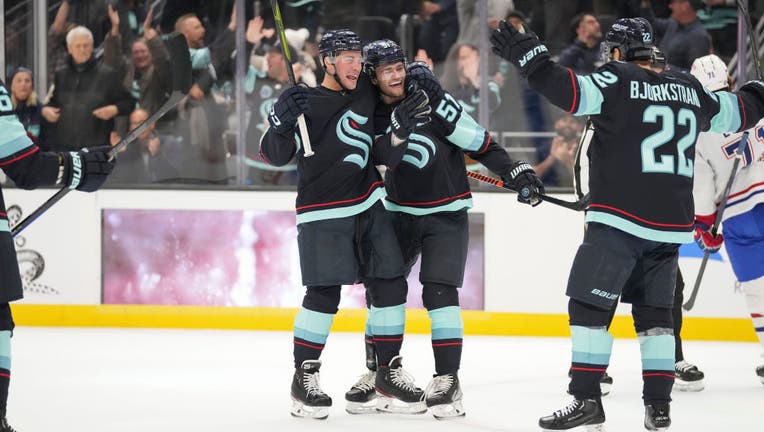 SEATTLE - Shane Wright scored the first goal of his NHL career against the Montreal Canadiens on Tuesday night, but the Seattle Kraken couldn't overcome defensive miscues in a 4-2 loss.

The Kraken allowed four goals on only eight shots through the first two periods of play as goaltender Martin Jones as hung out to dry on multiple occasions. A Jared McCann goal at the end of the second period wasn't enough to claw back into the contest as Jake Allen made 31 saves on the night for Montreal.

"We had a turnover at the end of a shift. We made a mistake on a face-off. They're different plays. … We didn't get it done tonight. Those have been points of emphasis for us and been a big part of successful games for us," head coach Dave Hakstol said.

Seattle out-shot the Canadiens 33-16 in the contest and had 19 more shots blocked by Montreal as they created plenty of offensive pressure. Outside of Wright and McCann, the Kraken were unable to find a way into the net behind Allen.

Wright, back with the Kraken after a five-game conditioning stint with the Coachella Firebirds of the AHL, had his best showing in eight games played with Seattle this season. Wright had three shots on net in the first period as he easily could have tallied the first multi-goal game of his career as well.

Wright had just one point in seven games played for Seattle before Tuesday night. Wright picked up a secondary assist on a Ryan Donato goal against the St. Louis Blues on Oct. 19. But there was nothing cheap about Wright's first goal.

Wright found space in front of the net and perfectly delivered the puck over the left shoulder of Allen off a feed from Oliver Bjorkstrand. Yanni Gourde won a puck battle behind the net with Mike Matheson that set up the scoring sequence.

"I think obviously It's going to be something I'll remember for the rest of my life," Wright said. "I think your first NHL goal is definitely a pretty, pretty cool accomplishment, pretty cool milestone."

Gourde fed Wright on a similar look earlier in the period that was stoned by the right leg of Allen. Another chance from Wright in front of the net was deflected by deflected out of play by Allen.

"A majority of the goals are scored from inside the blue paint, inside the crease there. So, you know, if I want to score goals, if I want to create opportunities, that's where I've got to go. And I got two pretty good line mates there and Gourdo and Bjorkstrand to help me out," Wright said of finding space in front of the net.

Wright scored four goals in five games with the Firebirds on his conditioning stint with the team and said before the game that he felt the experience helped build his confidence level. Wright looked comfortable back in the lineup with the Kraken and was able to help create multiple scoring chances for Seattle throughout the night.

"That's what you want to see as he came back in the lineup, that type of energy and just play-making ability that he showed," Hakstol said.

"Everybody was excited for him to get his first goal. Happy to see him have that type of start to the hockey game."

Wright had long been considered the top prospect in last year's NHL draft class before ultimately falling to the Kraken with the fourth overall pick. Montreal chose to pass on Wright and select Juraj Slafkovský with the top pick instead.

Wright's return to the lineup coinciding with Montreal's only trip to Seattle this season made for a bright spotlight to be paid to his return to action with the Kraken. Wright tried to downplay the notion that getting his first goal against the Canadiens meant anything extra to him.

"What matters most to me is my first goal," he said. "I think that's the most important part. It doesn't matter who it's against, you know how when and I think just in general the feeling of scoring your first goal in the NHL is always an incredible feeling and that's the part I'll remember the most."

Wright then did say maybe there was a little something to it.

"Maybe a little bit," he said. "For me, it was more important coming off the conditioning stint in my first game after that, that was more important to kind of come out with a good start and to really show that the time down there  helped me out to really grow and developed a lot down there. So yeah, I wouldn't say it woudl be sweeter going against any other team or Montreal or whatever it is. I think overall it just feels good to score in general."

Behind Wright's goal, the Kraken thoroughly outplayed Montreal for much of the night only to see the few opportunities they did allow all seemingly find the back of the net.

In a 1-1 game early in the second period, a bad turnover from André Burakovsky trying to clear the defensive zone led to an easy Cole Caufield goal off an assist from Nick Suzuki to put the Canadiens back on top. Just 17 seconds later, Montreal extended the lead further. A lost face-off by Wright at center ice quickly led to Christian Dvorak finding a surging Josh Anderson to make it a 3-1 lead.

Seattle then got caught in a line change during 4-on-4 play late in the period with Rem Pitlick finding open ice on the door step of Jones and hammered home a pass from Joel Edmundson to give Montreal a 4-1 advantage.

The opening goal for Montreal from Johnathan Kovacevic is the only one Jones stood much chance on, however. Kovacevic's shot from inside the blue line was screened by Burakovsky and Jones picked it up too late to stop.

"The first one was a weird one. I still can't tell if it went off Burky or not, you know, went through traffic. But the next three, those are backdoor looks and I'm not sure if he had touches in between many of those. So those aren't on Jonesy," Hakstol said.

Jared McCann redirected a Burakovsky pass between the legs of Allen with 0.9 seconds left in the period to claw a goal back before intermission and cut the deficit to 4-2.

The Kraken out-shot the Canadiens 14-8 in the final period but were unable to find the goals necessary to rally.

"We got to clean up a couple things that we know are blatant and obvious," Hakstol said. "We don't need necessarily to practice to do that. What we do need to do is get in a little bit better sync with the puck. And that's where tonight, we weren't efficient enough in terms of getting through the neutral zone, getting out of our zone, getting through the neutral zone, and being cohesive with the puck. So, defensively, we know what those issues are and that's that's a quick cleanup. But our play with the puck has to get a little bit more organized and a little bit more cohesion to it."