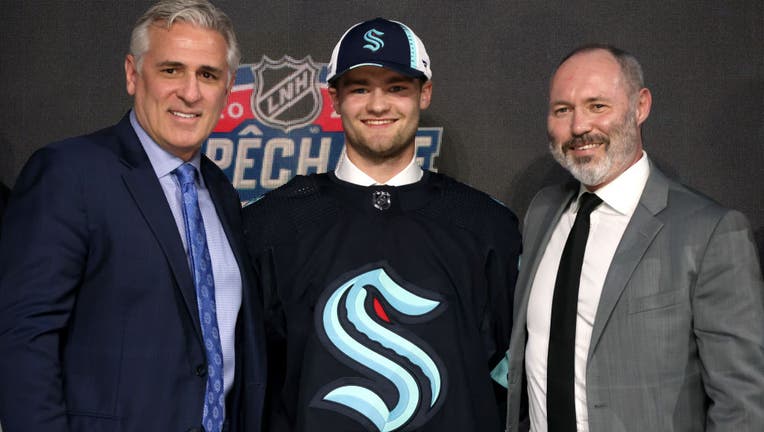 MONTREAL, QUEBEC - JULY 07: Shane Wright poses for a photo onstage with general manager Ron Francis (L) after being selected fourth overall by the Seattle Kraken during the first round of the 2022 Upper Deck NHL Draft at Bell Centre on July 07, 2022

SEATTLE - In the days after his unexpected draft night slide, Shane Wright’s phone lit up with a constant stream of text messages and calls from unfamiliar numbers.

Some were expected, like new teammates with the Seattle Kraken reaching out. Others caught the 18-year-old by surprise, like when Wayne Gretzky was on the other end of the line.

"Some number popped up on the phone. I’m like, ‘Hello?’ He’s like, ‘Hi Shane, this is Wayne Gretzky.’ Oh, OK. That’s pretty cool," Wright recalled Tuesday.

It’s been a whirlwind for Wright since he was taken by the Kraken with the No. 4 overall pick in the NHL draft. After a few years during which Wright was expected to be the No. 1 pick, he tumbled from the top spot as he was bypassed by Montreal, New Jersey and Arizona. Wright didn’t stop falling until Seattle — coming off a disappointing expansion season — nabbed what it believes is another cornerstone for its future.

Then came the messages from new teammates like Jordan Eberle, Jaden Schwartz and Matty Beniers. And the one unforgettable phone call from "The Great One."

"It was like probably an hour after the draft. He called me just to say just keep your head up, keep working, keep grinding. It’s not about what number you go, it’s more about the situation you go to and the city you go to, the organization," Wright said. "He just said keep your head up and just keep working, just earn your spot on the team and show that you’re a good player in the league and that you can be a difference-maker."

Becoming a difference-maker starts this week with Wright’s participation in Seattle’s first developmental camp. He’s one of the star attractions, along with Beniers, as the Kraken bring together prospects for the first time.

Beniers made an impact for the Kraken in his first season, appearing in 10 games late in the year after his college season at Michigan. He finished with nine points and looked ready to handle the rigors of playing in the NHL.

Wright is hoping he can show during this camp and into the fall that he’s ready to follow Beniers’ path.

"Development camp, it’s more about learning their play style, learning from their talented staff and coaches and to skate with other high-end players here," Wright said. "Once it comes to training camp, your mindset, your job is to earn a spot on the team. So that’s going to be my mindset coming into training camp and throughout the offseason."

Wright has played under the microscope for years in the Ontario Hockey League as the long-projected top pick. He put up 94 points in 63 games of junior hockey last season.

His draft fall was reminiscent of Seth Jones in 2013 — the last draft with a massive level of uncertainty about the top pick. Wright appeared to be glaring toward Montreal’s staff after he was finally selected fourth, but he said the analysis of his facial expressions has been blown out of proportion.

"I was just trying to look into the camera and I guess their table just happened to be right behind there," Wright said. "I can understand, I can see why people could misinterpret what happened there. But I wasn’t trying to death stare toward Montreal’s table or anything."