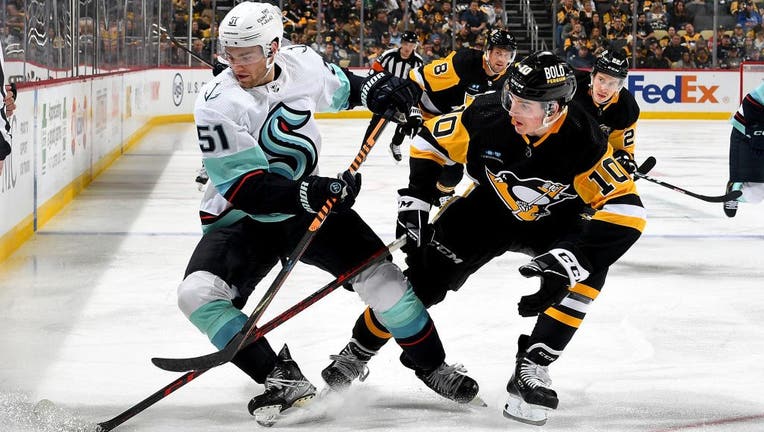 PITTSBURGH, PA - NOVEMBER 05: Shane Wright #51 of the Seattle Kraken and Drew O'Connor #10 of the Pittsburgh Penguins battle during the game at PPG PAINTS Arena on November 5, 2022 in Pittsburgh, Pennsylvania. (Photo by Joe Sargent/NHLI via Getty Ima

Shane Wright is back with the Seattle Kraken after a two-week conditioning stint with the Coachella Valley Firebirds that saw him score four goals in five games at the AHL level.

Wright – the No. 4 overall pick in this summer's NHL Draft – will return to action Tuesday night against the Montreal Canadiens; the team that passed on him to select Slovakian winger Juraj Slafkovský with the No. 1 pick in the draft.

"Obviously nice being back here," Wright said on Monday. "It was a really fun two weeks down in Coachella. Had a lot of fun there. It was a great group, a lot of success as well. It's nice to be back in Seattle. It's nice to be up with the guys and … hopefully ready to go tomorrow for the game as well."

Wright has appeared in just seven games for the Kraken this season and only twice since Oct. 23. His lack of playing time has been the subject of much consternation from many in the Canadian hockey community. They openly wondered and criticized the Kraken for either not giving Wright more opportunity in Seattle or sending him back to his Ontario Hockey League team – the Kingston Frontenacs –  to have a chance to play regularly there.

The Kraken instead utilized a loophole in the NHL's agreement with the Canadian Hockey Leagues (OHL, WHL, OMJHL) that typically prohibits players drafted from their leagues from being able to play in the AHL before they turn 20 years old. Wright was a healthy scratch for five straight games, which made him eligible for a one-time, 14-day conditioning stint with the Firebirds.

Wright said the five games played with Coachella Valley were beneficial in building up his condience.

"Huge difference. Definitely gained a lot of confidence down there," Wright said. "It was nice to be able to play high minutes, get a lot of touches, play the puck as well and just kind of play my game, be myself and regain that confidence in myself and my abilities. Hopefully bring that back up here to Seattle.

"That confidence in myself and the ability that I can make plays here, I can compete here and be a good player here and hopefully I can bring that back here when the game comes."

The timing worked out where Wright's return to the lineup comes against a Montreal team that could have made him the No. 1 overall pick this July. Wright had long been considered the top prospect in this year's draft class. But after a strong showing in the Olympics, Slafkovský became the Canadiens choice. Defenseman Šimon Nemec went to the New Jersey Devils and U.S. junior forward Logan Cooley went third to the Arizona Coyotes to leave Wright on the board for Seattle with the fourth overall pick.

Wright said that he's not making anything extra of the game against Montreal because of that decision.

"Just going to try to treat it as another game. Obviously my first one back from being in Coachella. Going to try to play with confidence if I'm in the lineup and not really going to think anything extra or anything special and just take it as a normal hockey game," Wright said.

Per Mike Benton of the Kraken Audio Network, Wright centered the third line between Yanni Gourde and Oliver Bjorkstrand during the team's morning skate on Tuesday.

Wright is averaging just over eight minutes of ice time per game that he's played so far this season. His only game in double digits came against the Minnesota Wild on Nov. 3 when Wright had a career-high 13:45 on ice in a 4-0 victory in St. Paul. The pairing on the third line should give Wright more chances to get on the ice against the Canadiens.

"Really nice to see him be able to play some minutes," head coach Dave Hakstol said of Wright's time with the Firebirds. "Nice to see him have some early success in terms of the offensive side, scoring a couple of goals. Those are all real positive."

Morgan Geekie is expected to return to the lineup after missing three games with an upper body injury and will handle center duties on the fourth line between Brandon Tanev and Daniel Sprong. The strong play of Geekie to start the year has been one reason why Wright couldn't find as much ice time either. Geekie has nine points with four goals and five assists in 18 games played for the Kraken this season despite an average of less than 10 minutes of ice time a game. Seattle ran off a 10-1-1 stretch through November with Geekie anchoring the fourth line.

Gourde has predominantly played center for the Kraken on the third line this year. However, he's well experience playing on the wing as well.

Wight has just one point in seven games for Seattle and is still in search of his first NHL goal. Wright got a secondary assist credit on a breakaway goal from Ryan Donato in an overtime loss to the St. Louis Blues on Oct 19.

One question still up in the air for Wright is what comes next? Wright is eligible to play in the IIHF World Junior Championship for Team Canada if he's released to play by the Kraken. Training camp opens for Canada later this week for the tournament set to be held in Halifax, Nova Scotia and Moncton, New Brunswick in Canada Dec. 26-Jan. 5. Like the AHL stint, the championship would be another opportunity for Wright to play considerable minutes that may not be available currently in Seattle on a regular basis.

"Any time you can represent your country on the world junior stage, something you grow up watching, it's never really something you can pass up too easily. No final decision has been made yet but it's definitely a tough thing to pass up if the opportunity comes, for sure," Wright said of the possibility.

That would give the Kraken until January before needing to decide whether to keep Wright for the rest of the year in the NHL or send him back to the OHL to finish the campaign.

But that decision can wait a couple of more days. First up is Montreal.

"I want him to be excited to play for our team, and I know that’s how he’s going to feel," Hakstol said.