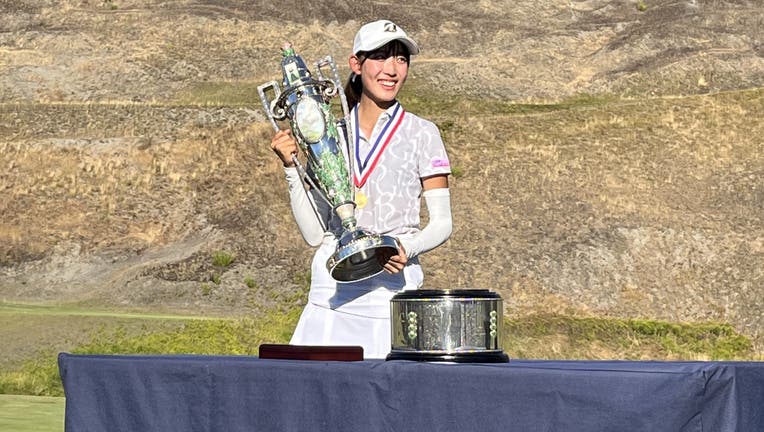 The victory is tied for the third-largest margin of victory in the championship's history.

"I'm really, really happy," Baba said through an interpreter. "I was just thinking of winning. Just saying ‘winning, winning.’ But I also decided to enjoy the round. It's just amazing. I just can't believe it."

Baba was the highest-ranked player in the world (No. 45) to reach the quarterfinals. She was pinpoint accurate with her iron play and immaculate with her short game in separating herself from Chun to become just the second Japanese player to earn the Robert Cox Cup along with Michiko Hattori.

"The first day Saturday (during the practice rounds) I knew she was something special," said caddie Beau Brushert, a local Chambers Bay caddie who carried for Baba the entire week.

"I think the most exceptional thing was just watching her around the greens. You saw that chip-in today on (No.) 5, she takes that little 58-degree wedge anywhere off the green and just every time it has a chance to go in."

Baba took a 7-up lead after the morning 18 holes as she dropped just a single hole to Chun over the opening round. Chun tried to make it a fight early in the afternoon session with a birdie on the par 4 2nd to get a hole back. Baba then made bogey on the par 3 3rd as the deficit was trimmed to 5-up.

Chun was looking to match Baba's opening round effort by winning three of the first four holes of the round as she had another birdie look on the par 4 4th. Instead, Baba got up and down for birdie from the front edge of the green while Chun's birdie putt slid by on the right side to halt her momentum and restore a 6-up advantage for Baba.

Both players flew long of the fifth green with their second shots, but Baba would chip-in for birdie as she took off from Chun. Baba birdied five of the last six holes, winning all six, to earn the victory on the 27th hole of the match.

"Her poise and her composure is amazing," Brushert said. "What was impressive about her is if she made a mistake on a hole or lost a hole – like you saw she missed that putt on (No.) 3 earlier in the second 18 – and that just woke her up. I mean, she birdied five of the next six holes and that's kind of what she did all week."

Baba was the first player from Japan to reach the U.S. Women’s Amateur final since Hattori in 1985. Hattori defeated Cheryl Stacy 5-and-4 at Fox Chapel Country Club in Pittsburgh, Pa. as the only other Japanese native to win the title.

"I think I was really able to do my kind of golf. Everything just went smoothly," Baba said.

She also credited the help of Brushert for helping her out with reading the greens.

"I think if it wasn't Beau, I wouldn't have been able to make it. He was a big help," Baba said.

Chun won the Canadian Women's Amateur last month at Westmount Golf and Country Club in Kitchener, Ontario in a two-shot victory over Alissa Xu. That victory got her into the field this week for the U.S. Women's Amateur as well as the upcoming Canadian Women's Open later this month. Chun also won medalist honors in the Big Ten Championship last spring in leading the team to the conference title.

"I couldn't have imagined making it this far and being here is just an incredible honor and just great to represent Michigan and Canada as well," Chun said. "Incredible summer. Beginning of the summer I could not have imagined that either, so pretty happy."

Baba's 7-and-6 victory over 17-year old USC commit Bailey Shoemaker was the largest winning margin in the semifinals since 1992 when Annika Sorenstam defeated Pat Cornett-Iker by the same margin. That came on the heels of a 4-and-3 victory over University of New Mexico's Lauren Lehigh in the quarterfinals that included a hole-out for eagle on the par 4 12th hole.

Baba's most difficult match of the championship was her first one. University of Virginia junior Jennifer Cleary made it all the way to the 18th hole as Baba earned a 1-up victory to advance to the Round of 32. Baba defeated 13-year-old stroke play co-medalist Alice Ziyi Zhao and Ohio State senior Aneka Seumanutafa both by 3-and-1 margins to advance to the quarterfinals.

"Her putting won it for her and she just putted great all week," Brushert said. "I think Thursday came along and that's really when we meshed and the trust factor kicked in and she started making a lot of putts on Thrusday morning and she's been making them ever since and here we are." 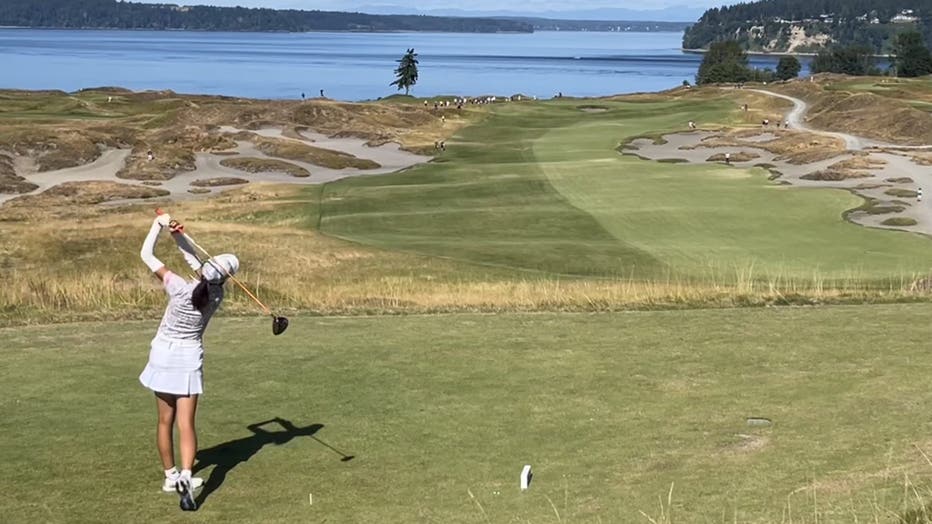 Seventeen-year-old Saki Baba of Japan tees off on the fifth hole at Chambers Bay Golf Course in the final of the U.S. Women's Amateur against Canadian amateur champion Monet Chun on August 14, 2022. (photo by Curtis Crabtree / FOX 13 Seattle)

Chun made an early mistake by blocking a fairway wood from the fairway into the long fescue grass on the side of a dune on the right side of the first hole. She was only able to advance the ball into a bunker, which led to an opening bogey. Baba lipped out a long birdie putt and took the first hole for an early advantage.

After matching birdies on the second hole, Chun's poor tee shot on the par 3 3rd led to another bogey and a 2-up advantage. Baba's stellar bunker play led to two more birdies as the lead continued to grow. Baba got up-and-down out of the front green side bunker on the par 5 4th hole for a birdie and a 3-up lead. Then a brilliant 165-yard fairway bunker shot on the par 4 5th skirting the front bunker and set up an 8-foot birdie try that she converted to take a 4-up advantage.

A poor tee shot into the fescue on the sixth led to an unplayable ball and the only dropped hole of the opening nine for Baba. However, Chun would lip out a par putt on the seventh and a wedge shot ripped back off the back slope on the eighth to over 40 feet away and another bogey as Baba took a 5-up lead.

Baba left another birdie putt inches short on the ninth as the lead remained at five into the back night of the morning round.

Birdies on the 13th and 14th further extended the lead to seven as Baba took full control. Chun shot even par on the back nine with a bogey on the 13th and birdie on the 18th and lost more ground to Baba before the midday break.

"I was trying to match it up but it was pretty amazing just to watch. She was going for every pin, making every putt and that's hard to match up," Chun said.

Everett native Anne Quast Sander – a three-time champion –  holds the record for largest margin of victory in a 36-hole final, earning a 15-and-14 victory over Phyllis Preuss at Tacoma Country and Golf Club in 1961. Glenna Collett earned a 13-and-12 victory over Virginia Van Wie at the Virginia Hot Spring Golf and Tennis Club in 1928. Then comes Baba's victory tied with Babe Didrikson Zaharias's 11-and-9 win over Clara Sherman at Southern Hills Country Club for third-largest margin in championship history.

The two largest margins of victory prior to Baba since 1970 were recorded by Morgan Pressel (9-and-8 in 2005 over Maru Martinez at Ansley Golf Club in Atlanta) and Kay Cockerill (9-and-7 in 1986 over Kathleen McCarthy at Pasatiempo in Santa Cruz, Calif.). Both Pressel and Cockerill were on-site at Chambers Bay this week as part of the broadcast team for Golf Channel. 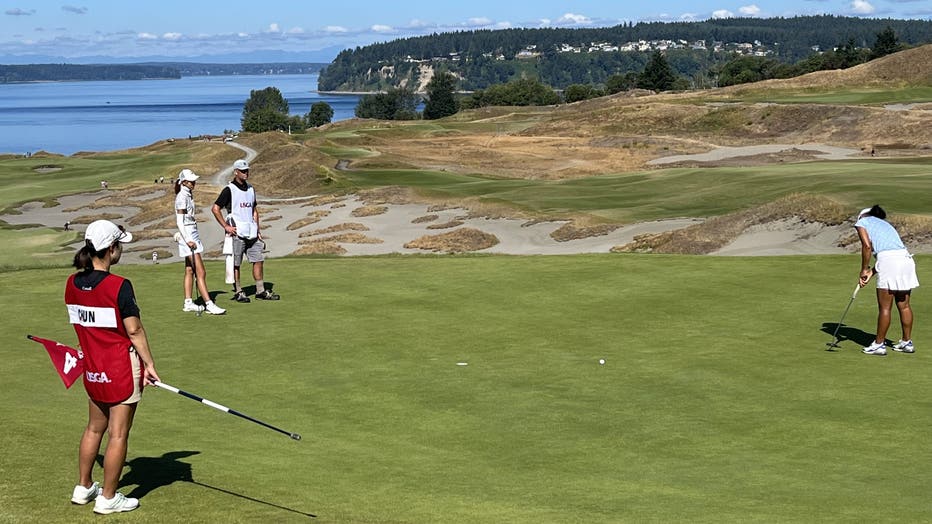