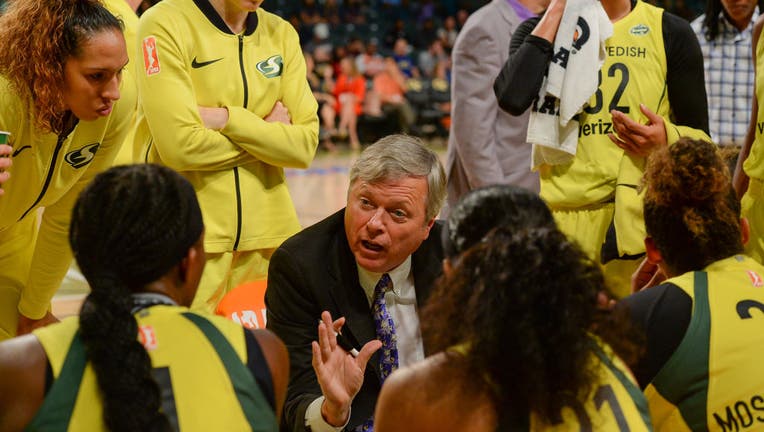 ATLANTA, GA JULY 22: Seattle head coach Dan Hughes talks with his players during time-out during the WNBA game between Atlanta and Seattle on July 22, 2018 at Hank McCamish Pavilion in Atlanta, GA. The Atlanta Dream defeated the Seattle Storm by a sc

SEATTLE - Seattle Storm coach Dan Hughes abruptly announced his retirement on Sunday, saying the rigors of being a head coach in the WNBA has taken a toll.

Hughes, 66, said he will continue to serve as an assistant coach for the United States at the Tokyo Olympics, but he is handing over the duties of leading the Storm to assistant Noelle Quinn.

"After over 40 years of coaching basketball, I want to finish my career with the focus and determination with which I started," Hughes said in a statement. "The Seattle Storm is in amazing shape, after two championships and a terrific playoff run in 2019, I would like to announce my retirement from the WNBA. I believe now is the right time because the team is performing well, but the rigors of being a head coach in the WNBA have taken their toll on me. I look forward to coaching with USA Basketball at the 2021 Olympics, then leveraging my experience to give back to the game in other ways."

Hughes has coached in the WNBA for 20 years with stops in Charlotte, Cleveland, San Antonio and Seattle. He has coached the second-most games in league history (598) and is tied for third in victories with 286.

Hughes arrived in Seattle in 2018 and helped lead the Storm to their third WNBA title. He missed part of the 2019 season after undergoing surgery and treatment for a cancerous tumor in his digestive tract, and he was not cleared to be with the Storm in the WNBA bubble in Florida during the truncated 2020 season that was capped with Seattle’s fourth title.

Hughes was twice named WNBA coach of the year, in 2001 with Cleveland and 2007 with San Antonio.

"It is rare when a leader has the foresight to make changes at the pinnacle of their career," Storm co-owner Lisa Brummel said. "Under Dan’s leadership, the Storm have won two championships and he has built a great coaching staff here in Seattle. His dedication to his craft is second to none and his legacy is perfectly exemplified by his unselfish nature and ability to see all that lies ahead."

Quinn, 36, joined Seattle’s coaching staff in 2019 after winning the first title of her playing career with the Storm in 2018. She handled head coaching duties earlier this week in a 90-87 win over Connecticut while Hughes was attending his son’s graduation.

"I am excited to hand the reins to Noelle," Hughes said. "She is well positioned to do this job and I am proud to have mentored her during my time here. I look forward to her and the team’s ongoing success."