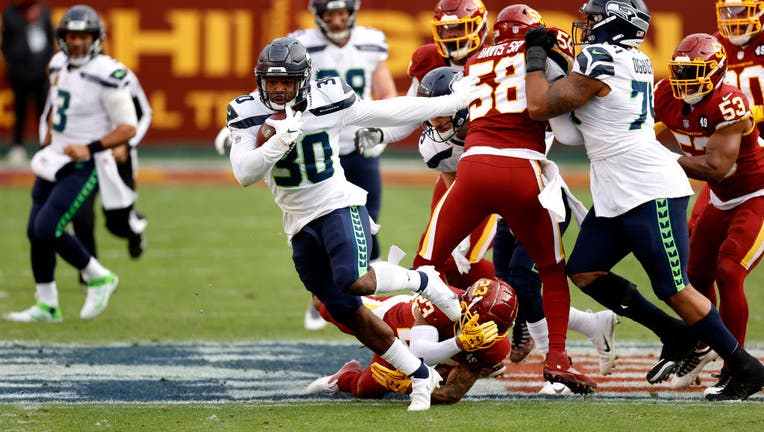 LANDOVER, MARYLAND - DECEMBER 20: Running back Carlos Hyde #30 of the Seattle Seahawks breaks a tackle from cornerback Ronald Darby #23 of the Washington Football Team to rush for a third quarter touchdown at FedExField on December 20, 2020 in Landov

WASHINGTON, D.C. - The Seattle Seahawks held off a late push by the Washington Football Team on Sunday, winning 20-15, and clinching a playoff berth.

Wilson threw for a touchdown, Carlos Hyde ran 50 yards for a score, and the Seahawks (10-4) picked off Washington quarterback Dwayne Haskins twice. Shaquill Griffin and D.J. Reed each had an interception as the league’s worst passing defense played strong until the fourth quarter. 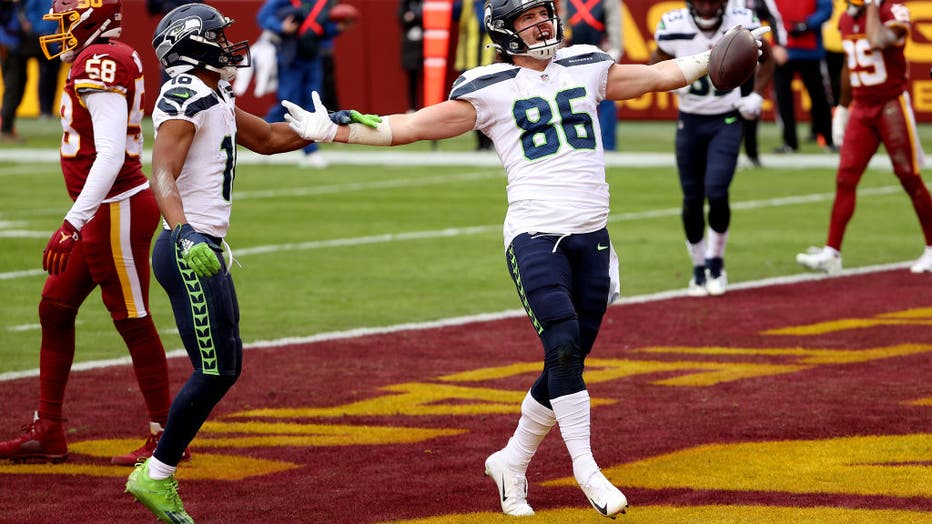 LANDOVER, MARYLAND - DECEMBER 20: Tight end Jacob Hollister #86 of the Seattle Seahawks celebrates with teammate Tyler Lockett #16 after catching a first half touchdown pass against the Washington Football Team at FedExField on December 20, 2020 in L

After a Haskins-led comeback from a 20-3 deficit fell short, Washington (6-8) had its winning streak snapped at four with Alex Smith out because of a calf injury. Haskins finished 38 of 55 for 295 yards, a TD pass and the two interceptions.

Wilson threw for 121 yards and a 10-yard TD pass to Jacob Hollister and ran for 52 on six carries. Hyde’s 50-yard TD run was Seattle’s longest rushing play of the season.

Jamal Adams’ sack of Haskins in the first quarter gave him 9 1/2, adding to his single-season record for a defensive back since the NFL began tracking the stat in 1982. Adams also became the first DB in that time to have a sack in four consecutive games.

Adams went to the locker room for a finger injury in the third quarter but didn’t miss a series.

When coach Ron Rivera benched Haskins after a 1-3 start to the season, he felt the offense was in better hands with an experienced QB. Haskins did well enough in relief of Smith last week, but his inexperience was on display against Seattle.

Beyond the interceptions, the 2019 first-round pick struggled with situational awareness for much of the day.

Seahawks: Rookie running back DeeJay Dallas was carted off after injuring his right ankle on kickoff coverage. ... Seattle played much of the game without two starters on the offensive line after left guard Mike Iupati departed with a neck injury. Right tackle Brandon Shell was inactive with an ankle injury.

Washington: Linebacker Shaun Dion Hamilton left with an elbow injury. ... Right tackle Morgan Moses missed time in the second half with a leg injury. ... Along with Smith’s absence, standout rookie running back Antonio Gibson missed a second consecutive game because of a toe injury, and linebacker Cole Holcomb was out with a concussion.

The Seahawks host the Los Angeles Rams next Sunday with first place in the NFC West at stake, while Washington hosts Rivera’s old team, the Carolina Panthers.