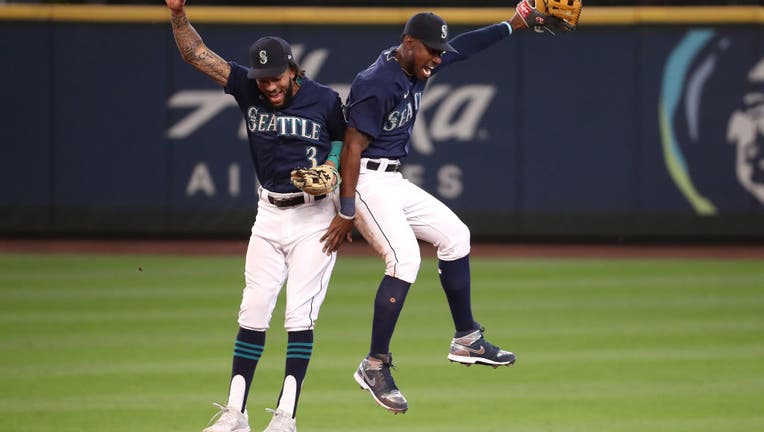 SEATTLE, WASHINGTON - SEPTEMBER 07: J.P. Crawford #3 (L) and Kyle Lewis #1 of the Seattle Mariners celebrate their 8-4 win against the Texas Rangers at T-Mobile Park on September 07, 2020 in Seattle, Washington. (Photo by Abbie Parr/Getty Images)

Seattle completed a four-game sweep of the Rangers, who have lost six straight. The Mariners are 11-3 after an 8-19 start, on their longest winning streak streak since July 24-30 last year against Detroit and Texas.

“Just worried about getting better every day. I said it the other day you’ve got to get it to .500 and we’re not there yet,” Seattle manager Scott Servais said. “We’re just learning about ourselves every day out there.”

Moore drove in a career-high four runs, homering in the third inning and clearing the bases with a two-out double into the left-field corner in the fourth. It was Moore’s sixth home run this season.

Seager gave Seattle an early lead for the second straight day with his seventh homer, a two-run drive off Kolby Allard (0-5). Seager also hit a two-run homer in the first inning in Sunday’s victory.

Moore and Seager provided plenty of offense for Marco Gonzales (5-2), who was coming off his second career complete game.

“I think you’re seeing a burst of confidence from a large majority of this team that’s finally feeling comfortable, finally feeling like they have a good routine down in the big leagues and going out there and really searching for wins,” Gonzales said. “We’re a very united group and we have been since day one here. I’m excited to see what this last stretch of baseball holds for us because we are playing great baseball right now.”

That was the only trouble Gonzales faced. He retired eight of his final nine after Gallo’s double. Gonzales has thrown at least seven inning in four of his past six starts and won his third straight decision.

“He does not back off. He doesn’t throw 95 (mph), but it doesn’t matter,” Servais said. “He can execute pitches. His ball has really good life and finish to it, and he really sequences pitches just outstanding throughout the course of the game.”

After two consecutive strong starts, Allard was battered by the Mariners for the second time this season. Allard gave up four runs and five hits on Aug. 21, recording only two outs against Seattle. He lasted longer this time, but couldn’t get out of the fourth inning, when Seattle sent 10 batters to the plate.

Moore delivered the big blow, keeping a 3-2 pitch fair down the left-field line to clear the bases. Ty France added a two-run single off Jimmy Herget.

“There have been some issues with runners on base. He hasn’t been as sharp. He’s gotta find a way to be able to execute in those situations,” Rangers manager Chris Woodward said of Allard. “I saw it a little bit last year and then this year, two starts back-to-back. Can’t seem to stop the bleeding.”

Gonzales didn’t issue a walk for the fourth time in his past five starts. He’s allowed just four walks in 50 2/3 innings all season. Gonzales has 46 strikeouts to four walks in his eight starts.

Rangers: Choo was replaced by Eli White in the sixth inning after suffering a sprained right hand. Choo was injured making an awkward head-first slide into home plate scoring on Gallo’s double. Choo’s hand appeared to get stuck in the dirt as he maneuvered around the tag attempt. He was briefly looked at by an athletic trainer on the field before returning to the dugout. The Rangers said X-rays were negative.

Woodward said it’s likely Choo will be out a couple of games.

Rangers: RHP Lance Lynn (4-2, 2.67) takes the mound for the opener of a three-game home series against the Los Angeles Angles. After starting the year 4-0, Lynn has lost his past two decisions, allowing nine earned runs in 12 innings.

Mariners: RHP Ljay Newsome (0-0. 2.57) starts the opener of a two-game series in San Francisco against the Giants. Newsome will be making his second start and third appearance.

Trump out to build 'permission structure' to win back voters

Analysis: Tiz the Law should win the Kentucky Derby easily

Trump out to build 'permission structure' to win back votersNEW YORK (AP) — Showcasing Black Americans at the Republican National Convention to allay white voters' fears that President Donald Trump is a racist. Sharing touching stories about the...

Osaka tosses racket, overcomes test from teenager at US OpenNEW YORK (AP) — Naomi Osaka spiked her racket after one errant forehand late in the second set at the U.S. Open, then flung it the length of the baseline after a missed backhand return ceded that...

Connect with the definitive source for global and local news

All contents © copyright 2020 The Associated Press. All rights reserved.