SEATTLE - The Seattle Kraken released its full schedule for the team's inaugural season in the National Hockey League.

The 82-game regular season begins with five away games starting with the Vegas Golden Knights on Tuesday, Oct. 12.

The Kraken head to Nashville, Columbus, Philadelphia and New Jersey before returning to Seattle for its first home game.

Other scheduled highlights, according to the team: 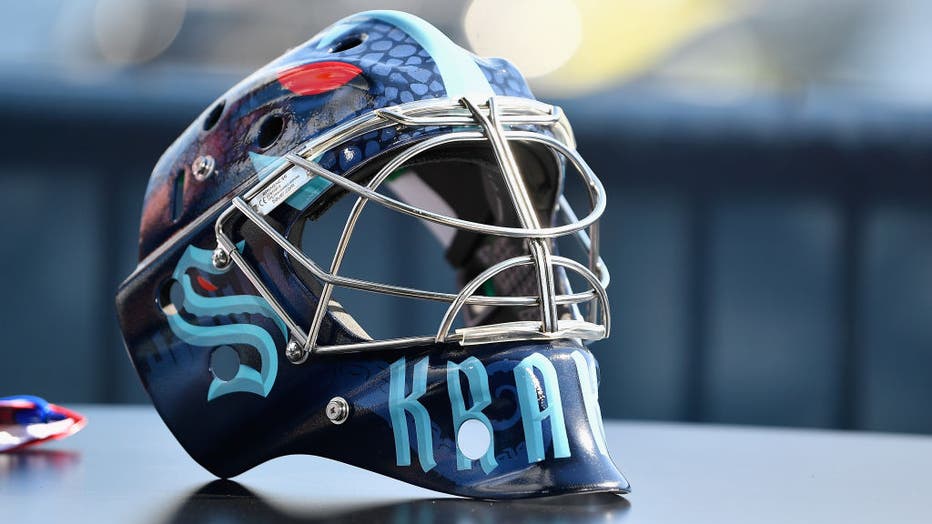 Kraken create nucleus in expansion draft but more to come

For the entirety of his NHL career, anytime Mark Giordano pulled on a jersey there was always a heavy dose of red.

When he pulled on the sweater of the Kraken, the only red visible was from the menacing eye in the center of the Seattle logo.

"After all those years of pulling on the red ‘C’ to put this on today was a different feeling for sure," Giordano said.

The veteran defenseman will be at the center of what takes place in the coming weeks as the initial Seattle roster that was selected during the NHL expansion draft is tweaked and adjusted into the squad that will take the ice in September to begin training camp.

The nucleus for the first couple of seasons came out of Seattle’s selections in the expansion draft, anchored by Giordano, who seems in line to become the first Kraken captain. Other core players include defensemen Jamie Oleksiak, Adam Larsson and Haydn Fleury, forwards Calle Jarnkrok, Jordan Eberle, Yanni Gourde and Brandon Tanev, and goaltender Chris Driedger.

But there’s also more to come and there’s the sense the roughly $30 million in salary cap space Seattle has will be put to use in short order, whether for trades or free agent signings.

As general manager Ron Francis described it, Seattle’s roster on Wednesday night was a "snapshot" of the moment.

"It’s pretty hard to explain to your fan base why you’ve got $7, $8, $10 million dollars in dead space when they want those players on the ice helping their team be successful," Francis said. "We think it’s valuable now. Not only now, it’s going to be valuable moving forward."

Seattle did make one move post expansion draft Thursday, trading winger Tyler Pitlick to Calgary for a 2022 fourth-round selection. Pitlick was Seattle’s selection from Arizona and cleared another $1.75 million in cap space for the Kraken.

While there are likely to be a few other players moved in the future, Giordano is hoping the group gets solidified soon. Unlike most situations where there are a dozen or so players he may have played with before, Giordano only saw former opponents on the list of his new teammates.