Seattle Kraken goalie's helmet to be auctioned off for cancer research

The helmet is painted lavender to represent all types of cancers. Phillip Grubauer lost two grandparents to cancer and makes an effort to visit patients receiving treatment when he's off the ice.

SEATTLE - You can learn a lot about a hockey goaltender by the art on their face masks.

Gary Cheevers was the first to paint designs on his in the 1970’s, adding one stitch for every puck that hit his mask during a game, and that's evolved over time. Throughout November, the art on the mask of Seattle Kraken goalie Philipp Grubauer tells a special story.

"I feel like everybody has a connection to cancer in the family or friends. It's not an easy topic to talk about or to be a part of, but we try to raise as much awareness as possible. A couple of my friends, both my grandmas [were affected], so it's got a personal history a little bit to it," Grubauer said.

The helmet has personal history and a memory painted in lavender, the color representing all types of cancer-- a disease he lost both of his grandmothers to. At the end of November, Grubauer’s mask will be auctioned off, with the money going to the Virginia Mason Franciscan Health foundation benefiting cancer research and the One Roof Foundation.

"My grandma, my grandpa have been a huge part of me playing hockey. That’s how I started playing hockey with cooking spoons, with a spatula in my grandma’s living room. They’re a huge part and I wanted to give back a little bit as well," he said.

From the living room to a two-time Stanley Cup champion with the Washington Capitals and Colorado Avalanche, he’s now a staple with the Kraken.

Grubauer typically works with a Swedish artist for his mask designs. For this Pacific Northwest theme, he looked closer to home.

"This one was actually special because it’s the first mask I've created with the graphics design team here. Drew did a phenomenal job. The Puget Sound is at the bottom and we have the trees. The mountains up top and then obviously the Seattle logo with the ‘Hockey Fights Cancer.’ The personal [touch] on the back are my dog’s paw prints, my parents and girlfriend’s initials, plus where I grew up in Bavaria." 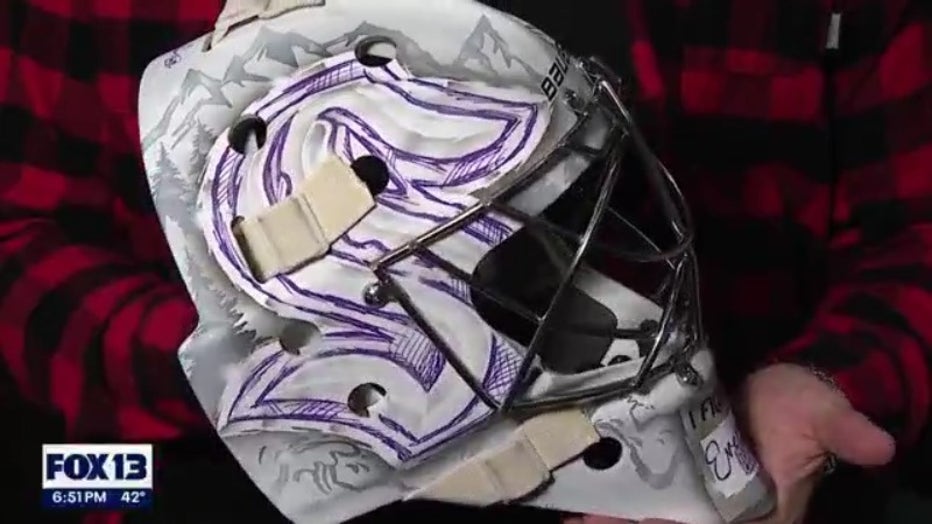 Grubauer visited patients receiving cancer treatment in Colorado, when he played for the Avalanche. Their conversations impact how he looks at any successes and failures on the ice.

"You take the game aside, there’s more to life than just hockey. I gave them a chance to come to hockey games and bring their family. (Try to) get outside of their treatment and just have fun get them maybe, to think a little bit different and get them maybe to forget about their treatment and what they're going through now. It was unbelievable to see some of the transitions they've made, and some not so fun stories. We’re looking forward to this year and getting more into the community and through this, raise more money to support more people."

With a six-year contract in Seattle, Grubauer wants to have a similar impact in our city. He missed the last bit of time with his grandmas as they fought cancer, which is why he feels compelled to give that time back to others dealing with it now.