Two Seattle stars have invested in the Kraken

SEATTLE - The expansion Seattle Kraken are adding some additional star power to their ownership group. 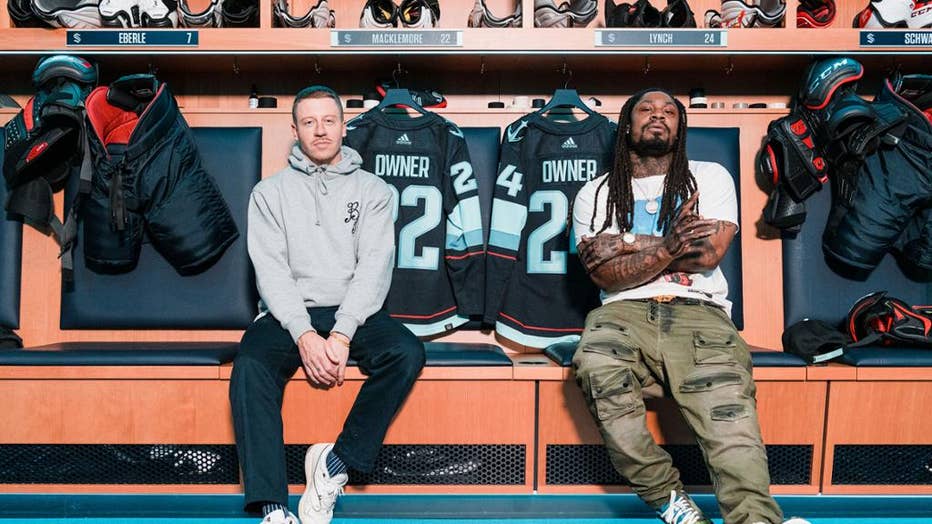 The two are taking small stakes in the franchise but bringing big ideas about community engagement and outreach to go along with their financial commitment. One of the original members of Seattle’s ownership group was Hollywood film maker Jerry Bruckheimer.

"I’d say that perhaps we didn’t need just two more investors. But these are investors who uniquely want to help us in the community and are excited about what we’re doing," Kraken CEO Tod Leiweke told The Associated Press.

The franchise is in the final weeks of its inaugural season after paying a $650 million expansion fee to join the NHL.

Macklemore, whose real name is Ben Haggerty, said part of his efforts will focus on the music community and curating partnerships between the team and young musicians to take advantage of smaller spaces at Climate Pledge Arena for performances on game nights.

He also intends to partner on a charity golf tournament involving the team and his Bogey Boys golf brand.

"I think bringing music to Climate Pledge is the big one and helping facilitate with local artists. There’s so many small micro venues in areas that people can perform at Climate Pledge outside of just Climate Pledge as an arena itself," Macklemore said. "I think that the Kraken have been really open and excited about bringing in local talent. So I think that that’s one way. I think the other way is just making sure that we’re exposing all people to the game."

As sporting events return to Seattle, so do the crowds. Saturday was a huge night for local bars and restaurants as fans packed into the neighborhoods to cheer on their favorite teams.

Macklemore has also been a part owner of the MLS Seattle Sounders since 2019. The Sounders won the MLS Cup title in the first season of his investment.

"I think that’s something that I feel super blessed and privileged to be a part of, and it’s transferred over to wanting to be part of the Kraken," he said.

Lynch was a member of the Seattle Seahawks from 2010-15 and 2019, and was part of the first team in franchise history to win the Super Bowl. He’s a beloved figure among sports fans in the area and last year ventured into sports ownership with an investment in the Oakland Roots SC, which plays in the USL Championship, the second tier of men’s soccer in the United States.

"I’ve been a part of a lot of things, but this is something I never would have imagined. As a young hyena I always dreamed of playing on a professional team but owning one is something special," Lynch said in a statement. "As I look back on some of my accomplishments -- I retired before I was 30 and now being an owner of a professional club at the age of 35 -- I’m going to continue to count my blessings. Being a part of the Seattle Kraken is something big for me and it gives me another chance to get a ring after helping bring the first one to the city."

Jared McCann leads the Seattle Kraken with 25 goals scored this season. With no playoffs this year, he’s looking to make the most of the team's nine remaining regular season games.