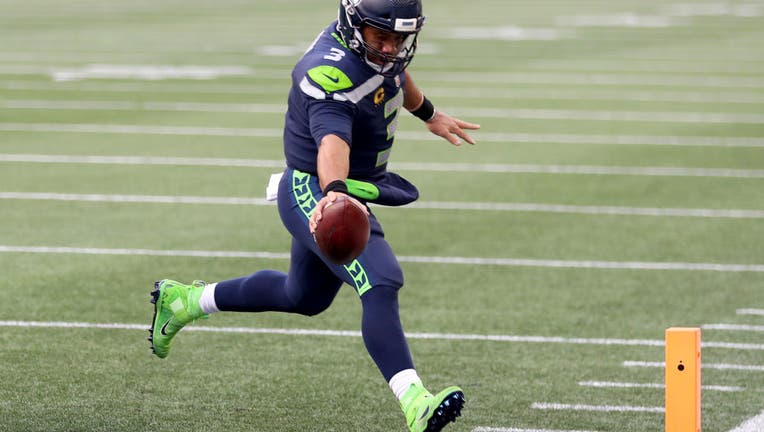 SEATTLE, WASHINGTON - DECEMBER 27: Russell Wilson #3 of the Seattle Seahawks stretches the ball into the end zone for a touchdown against the Los Angeles Rams during the third quarter at Lumen Field on December 27, 2020 in Seattle, Washington. (Photo

SEATTLE - The Seattle Seahawks claimed the NFC West title with a 20-9 win over the Los Angeles Rams on Sunday, with Russell Wilson throwing a 13-yard TD pass to Jacob Hollister with 2:51 left for the clinching score.

Seattle earned its first division title since 2016 and its fifth since Pete Carroll arrived in 2010 behind a stellar defensive effort and a clutch late drive engineered by Wilson.

Seattle’s quarterback scored on a 4-yard run on the opening drive of the second half for a 13-6 lead. But the final drive was Wilson at his best: Wilson was 5 for 5 for 59 yards on the drive, hitting four different receivers.

Wilson connecting with Hollister was a bit of redemption for the tight end who was stopped inches short of the same end zone on the final play a year ago in Week 17 against San Francisco. That gave the division title to the 49ers.

Wilson finished 20 of 32 for 225 yards. But unlike earlier in the season when it was Wilson that staked Seattle to a 5-0 start, this victory was carried by the defense. Seattle flustered Jared Goff, shut down the Rams’ run game, and held Los Angeles to a season-low in points.

The Rams became the fifth straight opponent held under 20 points by Seattle, something accomplished only four other times in franchise history and not since 2014 — the last time the Seahawks reached the Super Bowl.

Goff was 23 of 42 for 224 yards and a baffling first-half interception that cost Los Angeles points. Darrell Henderson Jr. rushed for 62 yards before leaving in the third quarter with an ankle injury.

The Rams can still reach the playoffs with a win over Arizona in Week 17, but the past two weeks have changed the tenor of their season. Last week’s shocking loss to the then-winless New York Jets cost the Rams control of the division. Now, Los Angeles risks missing the playoffs entirely if it loses to the Cardinals and Chicago beats Green Bay next Sunday.

One of the biggest plays of the game came when Henderson injured his ankle midway through the third quarter. The big running back appeared on his way to the end zone, only to get tripped up from behind by Jamal Adams.

Already without Cam Akers due to an ankle injury, Henderson’s absence left Malcolm Brown as the primary running back the rest of the way.

Henderson’s injury and Adams hustle on the play proved critical. Goff was stuffed on a third-and-goal sneak from the 1, and Brown was stopped short of the goal line on fourth down.

Jason Myers hit field goals of 45 and 49 yards in the first half to account for the Seahawks’ scoring. Myers has made 33 straight field goal attempts dating to last season.

Rams DT Aaron Donald sacked Wilson once, giving him 85 ½ for his career. That’s the third most in the first seven seasons of a career, behind DeMarcus Ware (99 ½) and Reggie White (95).

Scroll down for highlights: