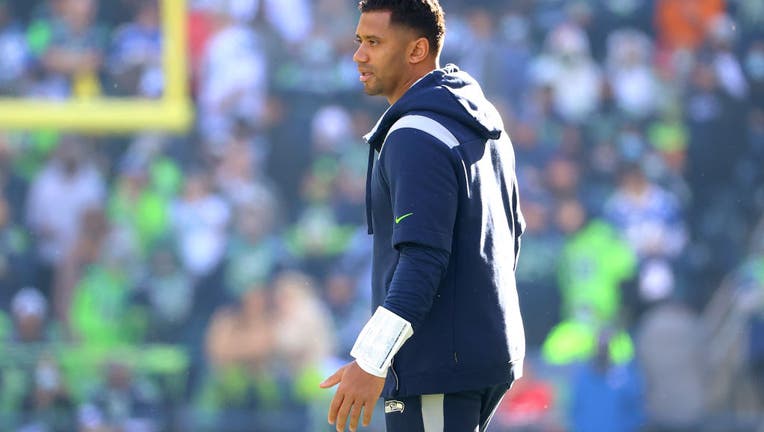 SEATTLE, WASHINGTON - OCTOBER 31: Russell Wilson #3 of the Seattle Seahawks reacts against the Jacksonville Jaguars during the second quarter at Lumen Field on October 31, 2021 in Seattle, Washington. (Photo by Abbie Parr/Getty Images)

SEATTLE - Seattle Seahawks quarterback Russell Wilson said he’s ready to return this week after missing the team’s past three games following surgery on the middle finger on his throwing hand.

"I feel great," Wilson said. "I feel really close. I’m not 100 percent yet, but I’m pretty dang close. I would say in the 90 percentile if not higher. I feel great. I’ve got great conviction about what I’m doing and how I’m doing it. My mindset is better than ever, ready to roll and ready to go."

Wilson went the first nine seasons of his career without missing a single start. He said Thursday that he had aspirations of starting the most consecutive games ever before multiple injuries to his finger sustained in a game against the Los Angeles Rams last month brought that quest to an immediate end.

Wilson’s hand hit Los Angeles Rams defensive tackle Aaron Donald on the follow-through of a pass attempt. The impact dislocated Wilson’s finger, caused a tendon injury known as "mallet finger," and resulted in a pair of fractures as well. Wilson said he initially believed the finger had just been dislocated and he and the team’s training staff attempted to reset it without success.

"I was throwing on the sidelines," Wilson said. "I could throw but it definitely, you know, you could feel it. It was definitely hurting because it was still dislocated and it wouldn’t go back because of all the things that happened."

Wilson was initially told it would be a 6 to 8 week recovery process. He was intent on beating those projections.

"My whole mindset was to cut the time in half and that’s kind of what my mindset has been since the moment it happened."

Wilson had the pin that was inserted in his finger removed on Nov. 1 and he threw a football for the first time since the injury less than a day later. Wilson said his "performance team" worked with him on his hand upwards of 20 hours a day after the surgery trying to expedite the rehab process as much as possible.

"We literally probably (went) 20 hours a day, 19 hours a day, you know," Wilson said. "We’re working on this hand just trying to break records with this thing, because it was a pretty severe injury, you know, in the sense of how many things happened."

Wilson’s potential return comes at a critical juncture for the Seahawks. They are 3-5 and outside the playoff picture at the midway point of the season. Their next two games come against the top two teams in the NFC with a road trip to Green Bay before facing the league-leading Arizona Cardinals at home. Seattle has little margin for error left at this point in the season.

Additionally, Wilson and the Seahawks are looking to snap a losing streak in Green Bay. Wilson has never won at Lambeau Field (0-4 including the playoffs). He’s completed 76 of 127 passes (59.8 percent), for 881 yards with four touchdowns and six interceptions. He’s combined passer rating over those four games is 71.7.

Meanwhile, the Seahawks have yet to win in Green Bay this century as they are on an 0-9 run in Wisconsin going back to their most recent victory in 1999 in Mike Holmgren’s first season as head coach.

Even if Wilson isn’t back to full strength, his return to the lineup gives Seattle hope of turning its season around.