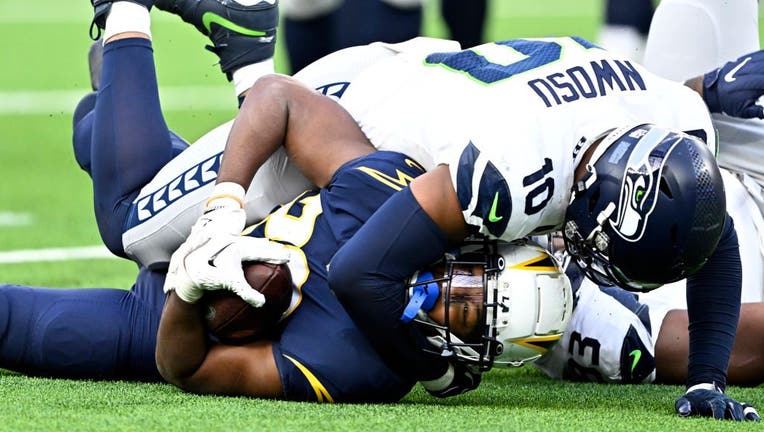 Inglewood, CA - October 23: Running back Isaiah Spiller #28 of the Los Angeles Chargers is tackled by linebacker Uchenna Nwosu #10 of the Seattle Seahawks for a loss of yards in the second half of a NFL football game at SoFi Stadium in Inglewood on S

RENTON, Wash. - The defense of the Seattle Seahawks has seemed to make pretty massive improvements over the last two weeks, but the New York Giants will present a terrific exam to see just how far the group has progressed.

Through five games, the Seahawks were allowing 170 rushing yards a game to opponents. Taysom Hill and Alvin Kamara each rushed for 100 yards as part of 235 yards in total for the New Orleans Saints in a Week 5 loss. The ground game failings were allowing opponents to average over 30 points a game as strong offensive efforts went to waste.

But over the last two weeks, the defense has clamped down in efforts against the Arizona Cardinals and Los Angeles Chargers. Seattle held Arizona running backs to just 44 yards on 17 carries and limited the Chargers to 53 yards rushing on Sunday. The improved play up front has led to opponents converting just 9-of-31 third down opportunities the last two games as well and just 32 points scored in total.

Additionally, they've been the best defense in the NFL over the last two weeks, per Football Outsiders' DVOA rankings.

"We’ve taken great strides in the last two games," defensive coordinator Clint Hurtt said. "We are not taking anything for granted, we have to continue to take that one step at a time, one game at a time, and don’t take for granted that it is automatically going to happen. You have to keep working."

The Giants are a team that is committed to running the football. They rank second in the NFL at 173.4 yards per game on the ground. Saquon Barkley looks fully healthy again now that he's another year removed from a torn ACL. Barkley is also second in the NFL in rushing with 726 yards so far this season.

"He’s a great back with great vision. If you are out of your gap, he’s going to find it and expose it, so everybody has to be disciplined across the board," defensive end Quinton Jefferson said.

But Barkley isn't the only rushing threat. Quarterback Daniel Jones has also rushed for 343 yards this season and is coming off a season-high 107 yards in the team's win over the Jacksonville Jaguars last week.

While Seattle has improved against opposing running backs, Kyler Murray still managed to rush for 100 yards against the Seahawks two weeks ago. Keeping Jones from getting loose will be almost as important as keeping Barkley contained.

"The running quarterback is obviously a big deal, but this kid, when he breaks runs, not a lot of people catch him," Hurt said of Jones.

The Seahawks made a shift with their play along the defensive line two weeks ago that has fueled their improvement. They allowed their defensive linemen to attack the line of scrimmage and try to penetrate through gaps instead of being more passive and reacting. The change has seemed a better fit for Poona Ford, Darrell Taylor and others along the line for Seattle.

"There’s a lot more responsibility on us playing the way that we do now," Jefferson said. "I feel like I’m comfortable with the guys I’m playing with and to take on that challenge. That’s the biggest thing, they gave us the keys, so we have to take full advantage of that and so we don’t go back to where we were.

A team like the Giants might be a group capable of exploiting those mistakes should Seattle get a little overzealous with their play.

"They are committed to it, they are trying to show their toughness, and impose their will on their opponent," Hurtt said. "I think as a coach, when you watch that, or even as a player, you identify that. If you have the attitude that we have here, listen, if we know what’s coming, we have to stop that. We’ve had situations where we have not handled that great, but we made those corrections, so that’s why I say that I look forward to the challenges."

If the Seahawks can keep the Giants rushing attack shut down, they should have great success on Sunday. The Giants have the 30th ranked passing offense in the league. New York is averaging just 160.9 passing yards per game. Jones has thrown just six touchdowns with two interceptions through seven games this year.

Another strong outing up front against the Giants would show that the Seahawks' defense has truly made a massive shift. That the performances of the last two weeks aren't just a pair of good performances but the start of true defensive resurgence.

In some ways, the game against the Giants will serve as the perfect midterm exam.

"This is the ultimate challenge," head coach Pete Carroll said. "This is as good a running team as we’re going to ever go against. We’ll find out where we stand."