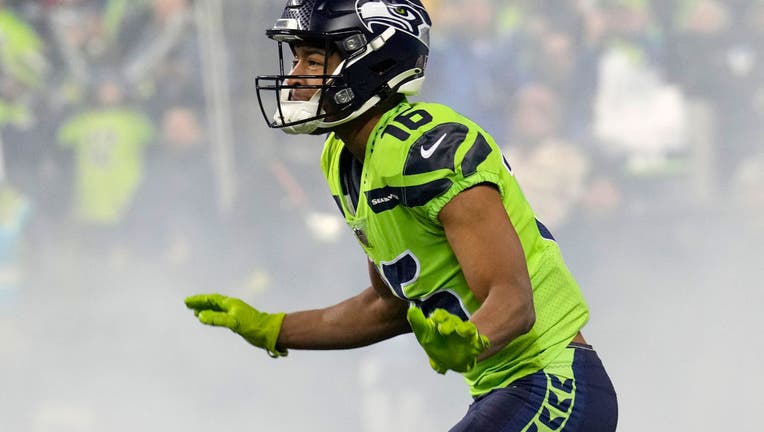 Tyler Lockett #16 of the Seattle Seahawks takes the field prior to a game against the San Francisco 49ers at Lumen Field on December 15, 2022 in Seattle, Washington. (Photo by Christopher Mast/Getty Images)

RENTON, Wash. - Seattle Seahawks wide receiver Tyler Lockett will undergo surgery to repair a broken bone in his left hand, but the team is optimistic he could return before the end of the regular season.

Coach Pete Carroll said Friday that there is no set timeline for Lockett's return, but there is hope the standout receiver may only be sidelined for a short time.

"Very optimistic review this morning from the docs that he’s got a chance to get back quickly, and we’ll see if it can happen," Carroll said.

Lockett was injured late in Seattle’s 21-13 loss to San Francisco on Thursday night. The injury appears to have occurred when Lockett was hit hard and fell awkwardly with 3:47 remaining in the game.

Lockett has missed only one game in his career due to injury and that came at the end of the 2016 season. Lockett has 78 catches for 964 yards and eight touchdowns this season.

Carroll also said an MRI confirmed an ACL injury in defensive tackle Bryan Mone's left knee. He was injured in the first quarter. Seattle may need to add depth at the position with Al Woods still dealing with an Achilles injury that kept him out against the 49ers.

The Seattle Seahawks made too many mistakes on Thursday night against a San Francisco team fully capable of punishing them when they happened in a 21-13 loss that clinched the NFC West crown for the 49ers. Takeaways:

Linebacker Jordyn Brooks also underwent scans Friday after he didn't play in the fourth quarter due to a sore neck. Carroll said all tests were clear, but Brooks is still dealing with some discomfort.

"He’s got some soreness and so we’re going to go through a process and try to alleviate the discomfort," Carroll said. "But there’s no structural issues right now."