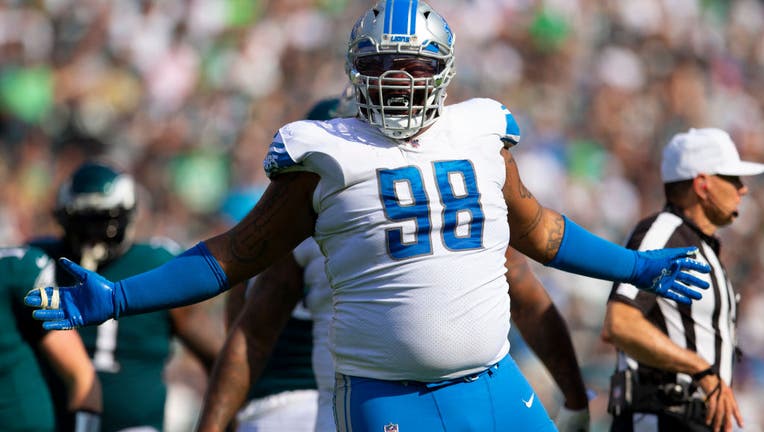 PHILADELPHIA, PA - SEPTEMBER 22: Damon Harrison #98 of the Detroit Lions reacts after sacking Carson Wentz #11 of the Philadelphia Eagles in the fourth quarter at Lincoln Financial Field on September 22, 2019 in Philadelphia, Pennsylvania. The Lions

The Seahawks signed former All-Pro Damon "Snacks" Harrison to their practice squad in October, and he made his Seattle debut in Week 10. Harrison was inactive for Sunday's game after Bryan Mone returned from the injured reserve list.

Harrison tweeted a "thank you" message to the Seahawks and said he would like to keep playing, but COVID has complicated that.

Harrison is in his ninth season and spent parts of the past two with the Detroit Lions, where he played in 25 of 26 games. He started all but one game with the Lions after being traded from the New York Giants midway through the 2018 season. His first game with Detroit came in Week 8 of the 2018 season against Seattle when he had seven tackles and a sack of Russell Wilson.

Harrison’s best season came in 2016 when he was voted first-team All-Pro after having a career-high 86 tackles and 2 ½ sacks for the Giants.

Harrison was released by the Lions in February, less than a year after signing him to an $11 million, one-year contract extension. He went into the 2019 season with two years left on the $46 million contract he signed with the Giants.