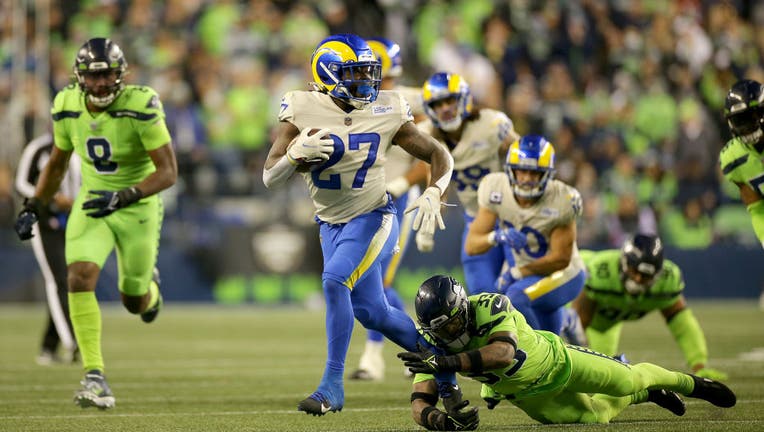 SEATTLE, WASHINGTON - OCTOBER 07: Running back Darrell Henderson #27 of the Los Angeles Rams eludes the tackle of safety Jamal Adams #33 of the Seattle Seahawks in the second half at Lumen Field on October 07, 2021 in Seattle, Washington. (Photo by L

The Seattle Seahawks vs. Los Angeles Rams game has been moved to Tuesday after a wave of Rams' players were added to the COVID-19 protocol list.

As of Thursday, the Rams had more than 20 players on the COVID protocol list.

The Seahawks said two players were on the COVID-19 protocol list.  Wide receiver Tyler Lockett and running back Alex Collins are the second and third players this season to be placed on the list.

The Seahawks (5-8) will take every little edge they can get when they travel to SoFi Stadium on Sunday for an NFC West showdown with the Rams (9-4) that could prove vital to both teams’ playoff hopes.

Seattle will now only have four days in between games before hosting the Chicago Bears at Lumen Field on Sunday, Dec. 26. Kickoff is scheduled for 1:05 p.m. on FOX 13.

It's just one of several NFL games that were rescheduled this weekend as more players across the league were placed on the COVID list.

The matchup between the Philadelphia Eagles and Washington Football Team was also moved to Tuesday at 7 p.m. ET/ 4 p.m. PT.

The Las Vegas Raiders’ game against the Cleveland Browns will now be played on Monday at 5 p.m. ET/2 p.m. PT on NFL Network. The Browns could have been without as many as 16 regulars on Saturday.

The NFL made similar schedule adjustments last year, but did not have to reschedule games during the first 14 weeks of this season. But this weekend’s games became jeopardized with more than 100 players testing positive for COVID-19 in recent days.

Previously, the NFL did not plan to move any games because of coronavirus outbreaks. It even said forfeits "could be in play."

But this weekend’s games became jeopardized with more than 100 players testing positive for COVID-19 in recent days.

In moves reminiscent of the environment for the 2020 season, the NFL has updated its protocols and advocated for booster shots in reaction to an increase in COVID-19 cases around the league.

"We have made these schedule changes based on medical advice and after discussion with the NFLPA as we are seeing a new, highly transmissible form of the virus this week resulting in a substantial increase in cases across the league," The NFL said in a news release. "We continue to make decisions in consultation with medical experts to ensure the health and safety of the NFL community."

Other sports have seen an uptick in viral cases. Many NBA and NHL teams have seen their rosters ravaged by the virus in recent weeks.

The FOX TV Digital Team and Associated Press contributed to this report.