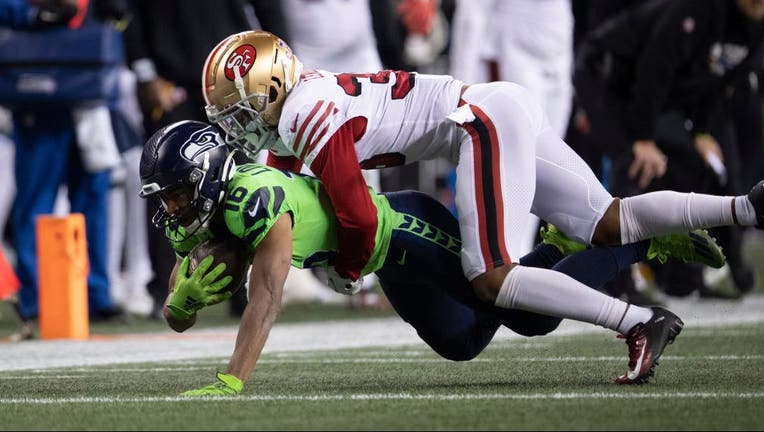 SEATTLE, WA - DECEMBER 15: Deommodore Lenoir #38 of the San Francisco 49ers tackles Tyler Lockett #16 of the Seattle Seahawks during the game at Lumen Field on December 15, 2022 in Seattle, Washington. The 49ers defeated the Seahawks 21-13. (Photo by

RENTON, Wash. - Wide receiver Tyler Lockett won't play for the Seattle Seahawks this week after surgery to address a fractured left index finger on Monday. However, it may be the only game Lockett misses as he has a chance for a quick return to the lineup.

"He had surgery and the docs said it was perfect," head coach Pete Carroll said on Tuesday. He had a lot of work done, but it's very, very secure. And so they feel very good about him coming back quickly."

Lockett sustained a fracture to his finger that Carroll said was a spiral fracture following Thursday's loss to the San Francisco 49ers. It appeared as though he sustained the injury on the final drive of the game on an incomplete pass with less than four minutes to play. He remained in the game as Seattle scored their lone touchdown of the contest, but headed to the locker room before the end of the game.

Carroll said that there's a chance Lockett just misses this Saturday's game against the Kansas City Chiefs before being able to return.

"That's the first thing that came out of them is that he had a chance, from the docs," Carroll said. "I mean that sounds crazy miraculous, but they secured it in a way that they know that he can already start moving his hand and stuff like that. So we'll see what happens."

Carroll said he wouldn't need to see Lockett return to practice if he was cleared medically to play next week against the New York Jets.

"I wouldn't have any problem with him playing with just going through the walkthroughs and stuff like that. I'm not sure what the situation will be. Whatever it is, he'll adapt to it and figure it out," Carroll said.

Dee Eskridge is eligible to be activated off the injured reserve list this week as well. However, Carroll said that Eskridge would not practice on Wednesday as he recovers from a broken hand sustained in the loss to the Tampa Bay Buccaneers in Germany.

"It really gives an opportunity for Marquise [Goodwin] and to see Tread and see what he can do to help us do and all the way through the ranks. Dareke [Young] will continue to play. Penny [Hart]'s working at it too. So everybody's going to have to fit together. You can't replace Tyler. He's too extraordinary in what he does."

The Seahawks are battling a number of injury concerns heading into this week's meeting with the Chiefs.

With nose tackle Bryan Mone out for the year due to a torn ACL, Woods' availability is even more important for Seattle. With Woods unable to play against the 49ers and Mone being injured in the first quarter, Poona Ford and Myles Adams had to handle nose tackle duties the rest of the game.

"He's still sore. I just visited with Al too," Carroll said. "He's sore and we're going to have to wait the week out and see what happens later on but right now he can't go today."

Walker has been battling an ankle injury that forced him to miss the team's game against the Carolina Panthers two weeks ago. With Dallas also ailing, the team re-signed Wayne Gallman to the practice squad for additional running back depth.

"He made it through the week and was a little sore coming out," Carroll said of Walker, who had 12 carries for 47 yards in the loss to San Francisco. "We'll see how this week goes. We've got to give him every day to get back."

Carroll said Dallas is pushing to return this week.

"He says he does (have a chance)," Carroll said of Dallas. "He's clamoring for it and I love the guy. He's all over. He's trying to talk the trainers into letting him do everything before they want it to, but if it can happen he'll make that happen."

Neal is fighting through a few issues late in the season. He banged up his elbow and shoulder a few weeks ago against the Rams and also landed hard on a knee. It's the latter issue causing the most problems currently.

"He's hobbling a little bit," Carroll said. "The work hit him hard. He's not ready to practice today. But we know he can do it and come back and play well, but we're days away from that at this point."

Linebacker Jordyn Brooks was able to practice on Wednesday. He left last week's game against the 49ers due to a neck injury with Tanner Muse finishing the game in his spot.

"He's practicing, so we'll see how it turns out for the week, but he's really determined to play," Carroll said.

Nose tackle Bryan Mone was placed on injured reserve to open up a roster spot for Treadwell's signing from the practice squad.

Defensive tackle Jarrod Hewitt was signed to the practice squad to fill Treadwell's spot on the unit.