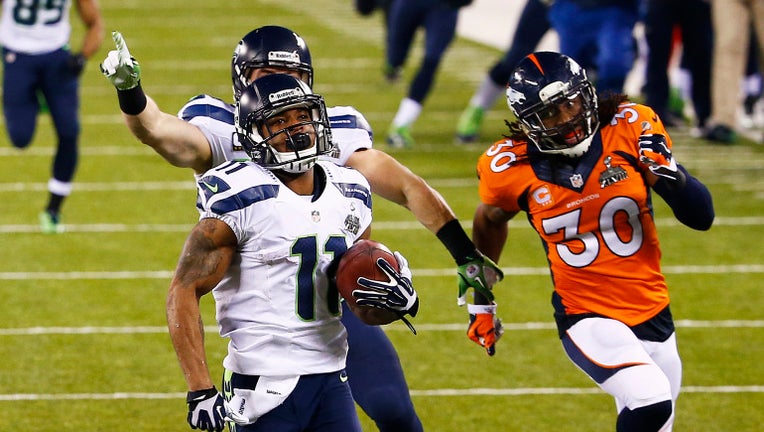 Wide receiver Percy Harvin #11 of the Seattle Seahawks returns the second half kickoff for 87 yards during Super Bowl XLVIII at MetLife Stadium against the Denver Broncos on February 2, 2014 in East Rutherford, New Jersey. (Photo by Tom Pennington/Ge

ESPN reporter John Clayton said the Hawks will receive a conditional pick between the 2nd and 4th Round of the 2015 NFL Draft for the trade.

"Although this was an extremely difficult decision, we are constantly evaluating our team and believe at this time, that this is in our best interest to move the team forward. We thank Percy for his efforts that contributed to a Super Bowl XLVIII victory and wish him well."

Rapoport reported that Harvin was not the easiest player to deal with in the locker room, and the Seahawks were in the market to deal him for "several weeks." NFL Media's Albert Breer reports that Harvin's "anger management issues" followed him from Minnesota to Seattle.

Harvin, 26, practiced with the Seahawks Friday, but he was listed as questionable to play in Sunday's game against the St. Louis Rams before the trade news broke.

Harvin came to the Seahawks before the 2013 season in a trade with the Minnesota Vikings. He was signed to a six-year, $64 million contract. But Harvin suffered a labrum tear in his hip before the season began, and missed all but one game in the 2013 regular season.

ALSO:  5 things to watch for in Sunday's Seahawks vs. Rams game >>

Some Seahawks players reacted to the news on Twitter Friday.