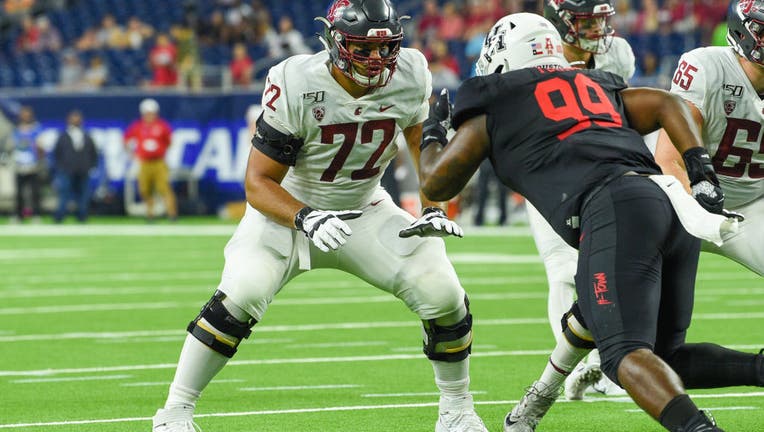 RENTON, Wash. - The Seattle Seahawks selected Washington State tackle Abraham Lucas with their third round pick in the NFL Draft.

After taking Mississippi State's Charles Cross in the first round, the Seahawks doubled down on their offensive line emphasis by taken Lucas in the third.

"It’s surreal, I’ll tell you," Lucas said of being drafted by the Seahawks. "I have a lot of emotions right now, I’m not really sure where to place all of them.

"I’m speechless to be honest. I’m just excited to continue to learn and get better with everything.

Lucas said he grew up a Seahawks fan and he remembers watching the Super Bowl in 2005 between the Seahawks and Pittsburgh Steelers. The Steelers won 21-10.

"We weren’t happy at the end result of that game," Lucas said.

After redshirting for the Cougars in 2017, Lucas became a four-year starter at right tackle.

Lucas was a freshman All-American in 2018 and a second-team All-Pac-12 in each of his first three years in college. He finished his career at WSU by being named a first-team All-Pac-12 performer for his senior season.

"Three of the four picks (being offensive line and running back) really makes a statement about the emphasis of what we'd like to get done and we want to shore things up on the edge," head coach Pete Carroll said. "With Kenneth (Walker II) coming in, Kenneth is an explosive, exciting running back to add to what we got. You know, it just rings true. We want to run football. We want to be good at it and want to compliment our whole football team with the way we approach it and this was an opportunity to do it and it just felt right."

"It's going to be a really competitive camp and this would be a great spot to watch in how this develops," Carroll said. "We've got some new rushers and we've got some new tackles on the edge. So those battles should be really big time in camp. So we'll look forward to that."