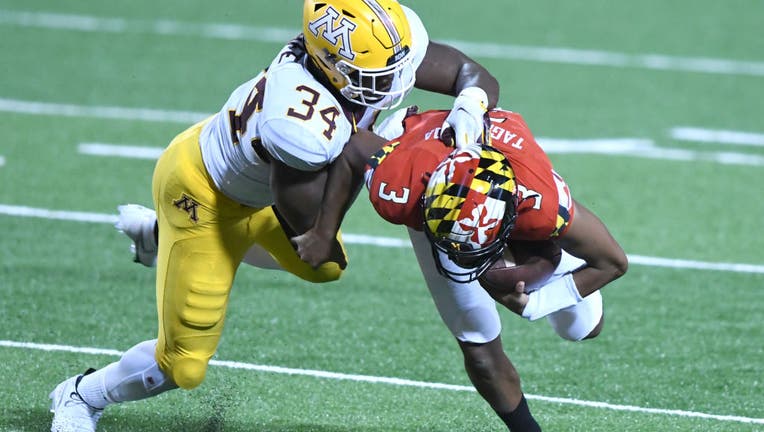 COLLEGE PARK, MD - OCTOBER 30: Boye Mafe #34 of the Minnesota Golden tackles Taulia Tagovailoa #3 of the Maryland Terrapins during a college football game on October 30, 2020 at Capital One Field at Maryland Stadium in College Park, Maryland. (Photo

RENTON, Wash. - With consecutive selections in the second round of the NFL Draft, the Seattle Seahawks have added Minnesota defensive end Boye Mafe and Michigan State running back Kenneth Walker II.

Mafe, 23, was a two-year starter for the Golden Gophers. In 13 games as a senior, Mafe had 34 tackles with seven sacks and 10 tackles for loss.

"It's euphoric," Mafe said of the selection. "All the hard work, all the times putting in that extra work and working out by yourself, watching extra film and then you're seeing that actually come to fruition now. Now it's time for me to put some more work in and go make it another level, compete and just come in and get ready to be hungry."

Mafe appeared in 42 career games at Minnesota with 13 total starts. He was never asked to be a heavy workload player at Minnesota and was used more as a situational pass rusher. He still managed to lead the team in tackles for loss and sacks in each of his final two years at the school.

Mafe averaged just 37 snaps a game as a senior for the Gophers.

He was one of the 30 visits the Seahawks could bring to town for a pre-draft visit.

"I had a great visit when I was out there in Seattle," Mafe said. "Talking to the coaches, it was great. We talked about ball a lot. They taught me a couple of things. The culture that they are trying to instill there, I could understand it and you know, I could buy into that. So it was very great for me to be able to meet them. And then getting that call and having a second conversation just made it all come real. And honestly, it's what I wanted and I'm glad I got the call from Seattle and excited to get out there."

Mafe had a standout performance at the Senior Bowl where he was named the player of the game for the National team.

"He's a very versatile football player," head coach Pete Carroll said. "He's a fantastic athlete with the speed and size that he brings. He can he can work on the edge as a pass rusher is the first thing we'd like to see him excel at."

Walker, 21, became a full-time starter last season at Michigan State after transferring from Wake Forest. He exploded with 1,636 yards and 18 touchdowns during his season with the Spartans. He won the Doak Walker Award as the best running back in the country and was a consensus All-American.

"I talked to them during the Combine and then I had a Zoom call with the RB coach (Chad Morton), but after that, there wasn’t much talking with Seattle until tonight," Walker said.

"Actually I am very surprised (they took me). At the end of the day, it’s a blessing to be on this team. I’m grateful for them giving me that phone call and it means a lot."

Walker's selection is interesting on another level as well. With Chris Carson still recovering from neck surgery, the pick indicates the Seahawks may not believe he'll be able to return to action this season. Head coach Pete Carroll has been non-committal recently when asked for updates about Carson's outlook.

"We picked him because on the board he was up there for us in a spot we just couldn't pass him up," Carroll said of Walker. "But we don't have updates yet on Chris. And we won't know for some time here and we can't predict yet. So there's a little bit of uncertainty that we're waiting on. So with the commitment that we have for the run game, we want that group of guys really raring up to get this thing hitting off from the get go and so it felt like a good move."

Rashaad Penny also is under contract after re-signing on a one-year deal this offseason. Neither Penny or Carson are under contract beyond this season, however.

Walker had 217 carries for 1,158 yards and 17 touchdowns over his first two seasons combined at Wake Forest.

"When I was at Wake Forest, I felt like I wasn’t a great fit for that offense," Walker said. "That’s when I ended up making my decision. Going to coach (Mel) Tucker, I had a great group of guys around me, my teammates and a great coaching staff. They put me in a pro-style offense that best suits my skills. I believe that’s what helped me have the season that I had and our team."

Carroll and general manager John Schneider agreed that seeing Walker in Michigan State's scheme helped their evaluation of him.

"They had an NFL style running game," Carroll said. "They did a little bit of everything. So you're able to see him run zone schemes, run gap scheme principles. I know that he was really effective in the counter game and so it was a really good illustration of a guy being able to blossom with the whole variety of the run game and so made sense to us that he really could fit." 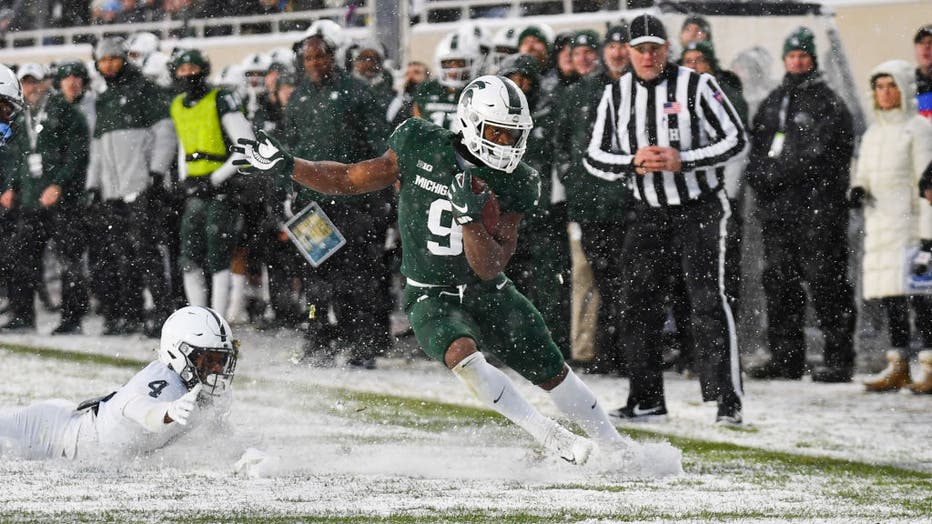