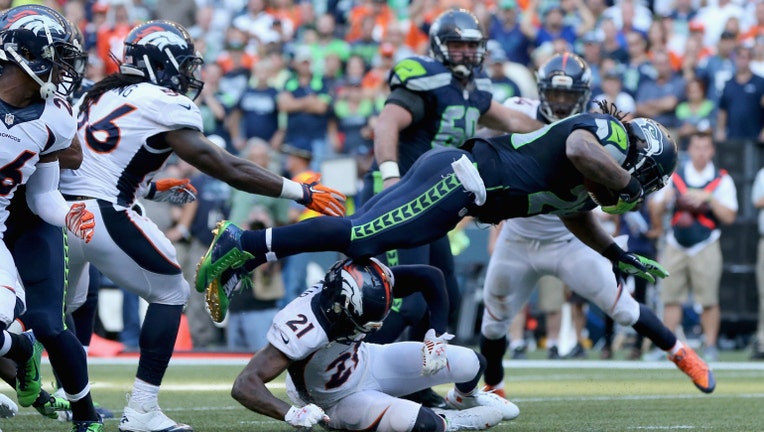 Running back Marshawn Lynch #24 of the Seattle Seahawks dives over cornerback Aqib Talib #21 of the Denver Broncos for the game winning touchdown in overtime at CenturyLink Field on September 21, 2014 in Seattle, Washington. The Seahawks defeated the

SEATTLE -- Late mistakes by the Seahawks allowed the Denver Broncos back into the game and forced overtime Sunday afternoon at CenturyLink Field. It was a nail biter, but the Hawks beat the Broncos 26 -- 20.

The Seahawks had a sluggish start going 3-and-out on their first drive, but they caught a break when the Broncos fumbled the ball after just one play.

The Hawks came out with a flea-flicker on the 1st play and Jermaine Kearse found Russell Wilson for a 17-yard gain down to the Denver 6-yard line.

Denver’s defense held the Hawks behind the goal line and they were forced to kick a field goal. That gave the Hawks an early 3 – 0 lead just minutes into the game.

Denver had a long 7:06 drive that resulted in the field goal thanks to a defensive stop at the Hawks 5-yard line.

Both teams exchanged punts until late in the 2nd quarter when Russell Wilson found Ricardo Lockette for a 39-yard touchdown pass. That put Seattle up 10 – 3.

That gave Seattle another opportunity with less than 3 minutes remaining in the 1st half. This time, Wilson found Marshawn Lynch for a 5-yard touchdown pass – giving Seattle a 17 – 3 advantage at halftime.

There were five back-to-back punts in the 3rd quarter followed by a rare missed field goal by Steven Hauschka (46-yard attempt).

At the start of the 1st quarter, the Hawks backed themselves all the way up to their own 1-yard line. On 3rd & 17, Wilson handed the ball to Lynch who was tackled in the end zone for a safety. Seahawks led 17 – 5 and kicked the ball back to the Broncos.

A tough break for the Seahawks led to a Broncos TD with 9 minutes to go. After a Denver punt, Wilson’s first pass was tipped and intercepted by CB Chris Harris.

The Seahawks couldn't get their offense going late in the game. Mistakes put them in a bad situation: punt, punt, missed field goal, safety, interception, punt.

The Broncos started to get some momentum on a late drive, but Kam Chancellor intercepted the ball at Seattle's 13-yard line.

The Hawks ate up some time and Hauschka kicked a 28-yard-field goal to give the Hawks an 8-point lead.

Peyton Manning led the Broncos 80-yards down the field and scored a touchdown on a 26-yard pass to Tamme. They needed a two-point conversion to tie the game and got it on a pass to Demarius Thomas.

That left 18 seconds on the clock for the Seahawks who took a knee and sent the game into overtime.

The Hawks won the toss and elected to receive the ball first. A touchdown would win the game -- otherwise the Broncos would get an opportunity to score.

Wilson led the offense to six 1st downs in a commanding 13-play, 80-yard drive and scored the winning touchd on a 6-yard handoff to Marshawn Lynch.