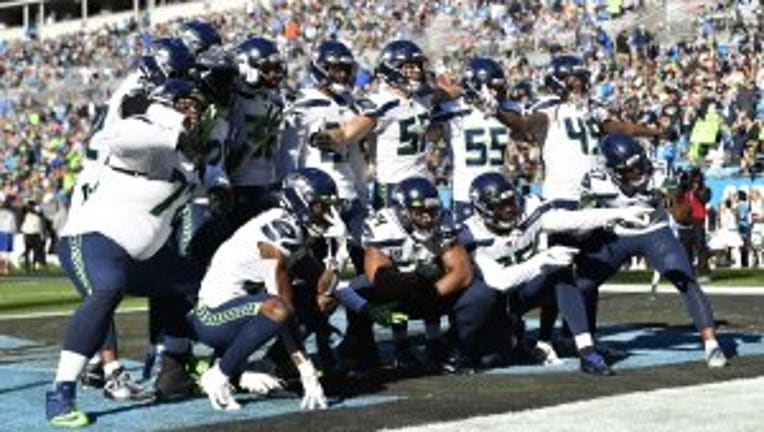 Seattle Seahawks teammates celebrate after an interception by Seattle Seahawks middle linebacker Bobby Wagner #54 in the first half at Bank of America Stadium on December 15, 2019 in Charlotte, North Carolina. (Photo by Grant Halverson/Getty Images)

SEATTLE – A blistering opening gave the Seattle Seahawks enough breathing room to stifle a late comeback from the Carolina Panthers and win 30-24.

Russell Wilson’s offense pounced on the Panthers with deep strikes including a 59-yard, fingertip connection to Josh Gordon that helped the Seahawks earn three touchdowns on three consecutive possessions.

Near the end of the half, a C. J. Prosise stumble was narrowly called a down instead of a turnover which took away Carolina’s best chance to cut into its deficit before the half, and Seattle's 13-point lead would hold thanks to an interception from Bobby Wagner.

Prosise had been promoted to backup Chris Carson after a season-ending injury to Rashaad Penny and was visibly frustrated after the drop.

Receiver Tyler Lockett had his best game since suffering a serious leg contusion against the 49ers and working back from illness. Seattle’s top receiver earned 120 receiving yards and a touchdown.

Both teams traded sloppy possessions in the second half with Kyle Allen throwing two picks and Seattle one on a trick play.

A 6-yard touchdown by Carson on fourth down extended Seattle’s lead to 20. But back-to-back scores from McCaffrey and an Allen connection to Curtis Samuel Pass Cut narrowed the lead to just six.

It took first downs from Carson and Lockett to seal the game.

Wagner left the game halfway through the fourth quarter with a right ankle injury. The severity of the injury is under evaluation.

The Seahawks will host the Cardinals Sunday, December 22.