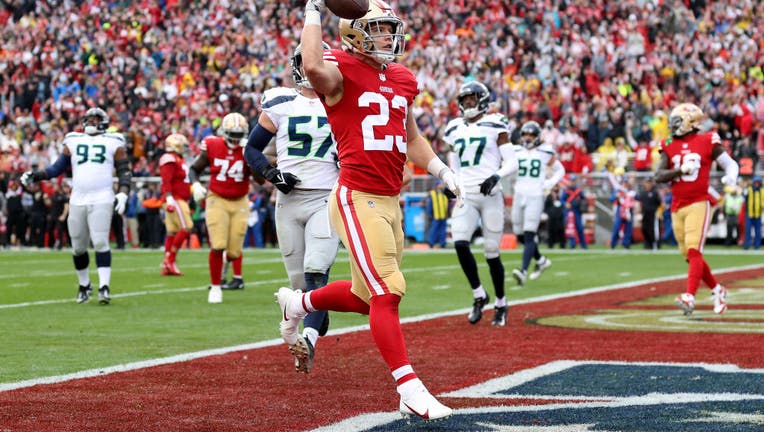 SANTA CLARA, CALIFORNIA - JANUARY 14: Christian McCaffrey #23 of the San Francisco 49ers celebrates after scoring a 3 yard touchdown against the Seattle Seahawks during the first quarter in the NFC Wild Card playoff game at Levi's Stadium on January

SANTA CLARA, Calif. - Brock Purdy got flushed out of the pocket, spun back the other direction and found a wide-open Elijah Mitchell for the score that put San Francisco in control for good.

Purdy answered another test and delivered another sterling performance in a remarkable rookie season that began as the final pick in the NFL draft.

Purdy threw three touchdown passes and ran for a fourth score in his playoff debut, leading the 49ers to a 41-23 victory over the Seattle Seahawks in a wild-card game on Saturday.

Purdy picked up where he left off in the regular season for the 49ers (14-4) and showed few signs of playoff jitters by winning his sixth straight start since replacing an injured Jimmy Garoppolo early in a Week 13 win over Miami.

The Niners advanced to the divisional round where they will host either Minnesota, Tampa Bay or Dallas next weekend.

Purdy connected on a 3-yard pass to Christian McCaffrey in the first quarter, converted a 1-yard sneak in the third quarter and a 7-yard TD pass to Mitchell early in the fourth to make it 31-17.

The Niners broke it open when Deebo Samuel took a short pass from Purdy and raced in for a 74-yard score with help from a downfield block by Brandon Aiyuk.

Purdy threw for 332 yards — the second most ever for a rookie in the playoffs to Russell Wilson’s 385 in a loss to Atlanta 10 years ago — and he became the first rookie QB ever to account for four TDs in a playoff game.

Purdy has lived up to the confidence his coaches and teammates have shown in him ever since he took over.

"I felt that way from the beginning once he got in that game against Miami," coach Kyle Shanahan said. "We didn’t have the luxury to sit there and worry about stuff the way the game was going. We just had to win the game and he’s done a hell of a job. He’s done it every time since. I have a lot of confidence in him."

The Seahawks (9-9) kept it close for most of three quarters before a strip sack by Charles Omenihu late in the third quarter spoiled a red zone drive.

Purdy then hit Jauan Jennings on a 33-yard pass to set up the TD pass to Mitchell that broke the game open. Purdy tied an NFL record for rookies set by Justin Herbert with his seventh straight game with multiple TD passes.

"He has showed us over and over again who he is and the type of player he is," linebacker Fred Warner said. "So I’m not surprised."

San Francisco piled on from there.

The loss brought a disappointing end to a surprising season for the Seahawks, who got into the playoffs on the final weekend in their first season after trading away Wilson.

Geno Smith stepped in admirably, throwing 30 TD passes in the regular season and keeping it close for a while in the playoff game thanks to a 50-yard TD pass to DK Metcalf in the first half.

"I’m not at all satisfied," Smith said. "I don’t feel good about what happened today. I feel like we we could have kept going. So for me, man, I just got to be better and I take this one personally."

The Niners raced out to a 10-0 lead after two possessions getting a field goal on the opening drive and then a 3-yard pass from Purdy to McCaffrey following McCaffrey’s 68-yard run on the second possession.

But Seattle battled back with a 14-play drive capped by Kenneth Walker’s 7-yard run and the deep pass to Metcalf.

The Niners responded after Seattle safety Johnathan Abram grabbed and twisted Samuel’s previously injured left ankle on a tackle early in the second half. Samuel stayed down to get his temper under control as his teammates rallied to his side.

The play angered the Niners, who responded by scoring the next 25 points to take control.

"At the end of the day, that turned our team up a notch and as you can see we went out there and made plays," Samuel said.

The Seahawks took a 17-16 lead into the half thanks to a bonehead play by Niners safety Jimmie Ward. Smith scrambled 9 yards to his own 47 with 1 second left in the half, but Ward hit him late after he started sliding.

The 15-yard penalty moved the ball to the San Francisco 38 and Jason Myers made a 56-yard field goal to make it 17-16 at the half.

Seattle became the third team since the start of the 2000 postseason to lead at the half in a playoff game after trailing by at least 10 at the end of the first quarter.

Seahawks: LB Darrell Taylor (neck stinger) left the game in the first half.

49ers: DE Samson Ebukam (ankle) left in the second half, but probably could have returned if the game had been closer.

49ers: The divisional round against Minnesota, Tampa Bay or Dallas.