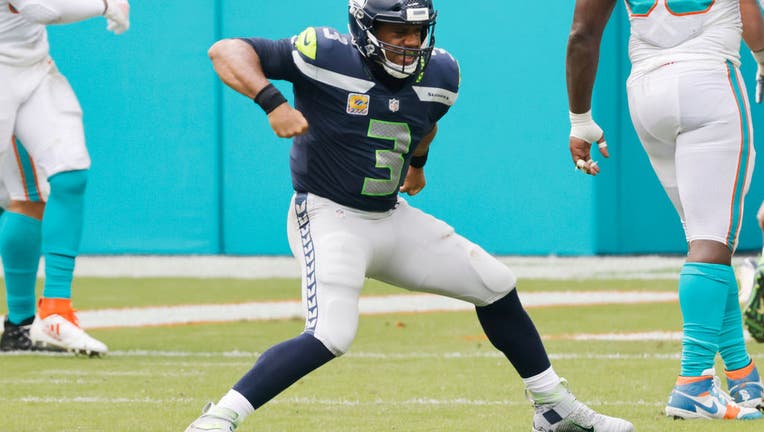 MIAMI GARDENS, FLORIDA - OCTOBER 04: Russell Wilson #3 of the Seattle Seahawks reacts after throwing a touchdown against the Miami Dolphins during the second quarter at Hard Rock Stadium on October 04, 2020 in Miami Gardens, Florida. (Photo by Michae

MIAMI - Russell Wilson threw for 360 yards and two touchdowns, and the Seattle Seahawks improved to 4-0 on the season by beating the Miami Dolphins 31-23 Sunday.

The Seahawks have won their first four games only one other time in franchise history — in 2013, when they won their only Super Bowl. They’ve scored 30 or more points in four consecutive games for the first time since 2015.

Jet lag and subtropical heat weren’t issues for the Seahawks. Neither were injuries that left them short-handed in the secondary, and five times Seattle forced Miami to settle for a field goal before the Dolphins finally reached the end zone in the final minutes.

Wilson connected with David Moore for 57 yards in the final seconds of the first half to set up a touchdown that gave Seattle a 17-9 halftime lead.

Wilson, who went 24 for 34, tied Peyton Manning’s record of 15 touchdown passes in the first four games of a season. Manning did it 2013.

DK Metcalf had four catches for 106 yards, Moore had three for 95 yards, and Chris Carter rushed for 80 yards and a pair of touchdowns.

But the Seahawks were twice blanked on trips to the red zone, including when Xavien Howard intercepted Wilson. Seattle had been 10 for 10 previously this season.

GET THE Q13 FOX APP FOR BREAKING SEAHAWKS ALERTS

Ryan Fitzpatrick was 29 for 45 and 315 yards but threw two interceptions for Miami (1-3). He also rushed for a touchdown and was the leading rusher for Miami with six carries for 47 yards.

On their next possession, Wilson hit Metcalf with a 32-yard pass to the Dolphins 1-yard-line, setting up Carter’s second touchdown with 4:05 left to make it 31-15.

The announced attendance was 12,369, a bit short of the 13,000 capacity, and there were numerous Seahawks jerseys scattered among the crowd.

NOT FEELING THE HEAT

The heat index was over 100 degrees and the temperature was 86 degrees, but it didn’t slow down the Seahawks’ offense.

Four Seahawks players took a knee and five others sat during The Star-Spangled Banner.

The Dolphins stayed in the locker room for the anthem.

Seattle plays host to Minnesota next Sunday. Wilson threw for 240 yards and two scores when the Seahawks beat the Vikings 37-30 last December.

Miami plays at San Francisco for the first time since 2012 next Sunday.