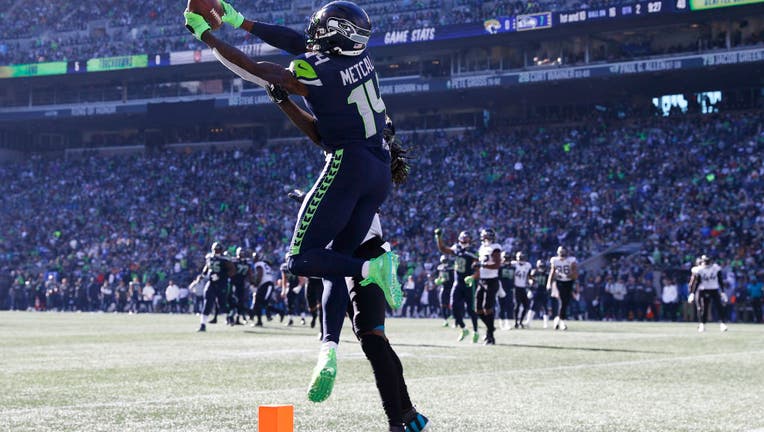 SEATTLE, WASHINGTON - OCTOBER 31: DK Metcalf #14 of the Seattle Seahawks catches the ball over Shaquill Griffin #26 of the Jacksonville Jaguars for a touchdown during the second quarter at Lumen Field on October 31, 2021 in Seattle, Washington. (Phot

SEATTLE - Geno Smith ran for one score and threw a pair of touchdown passes to DK Metcalf, and the Seattle Seahawks snapped their three-game losing skid by thumping the Jacksonville Jaguars 31-7 on Sunday.

In what may be his final start while Russell Wilson recovers from finger surgery, Smith was terrific picking apart the Jaguars defense for one of the best performances of his career. Smith completed his first 14 passes the longest streak to start a game in the NFL this season. He finished 20 of 24 for 195 yards, and his 83.3% completion percentage was a career best with at least 20 pass attempts.

While Tyler Lockett was Smith’s favorite target, Metcalf found the end zone. Metcalf made a terrific leaping grab over former teammate Shaquill Griffin in the second quarter to give Seattle (3-5) a 14-0 lead. Metcalf added a 5-yard TD reception early in the third quarter.

Lockett finished with 12 catches for 142 yards, the fourth time in his career with at least 12 receptions.

Jacksonville (1-6) avoided being shut out for only the fourth time in franchise history in the regular season on a short touchdown pass from Trevor Lawrence to Jamal Agnew with 1:49 remaining. Lawrence finished 32 of 53 for 238 yards, and his ninth interception this season came when he clearly expected Tavon Austin to run a different route.

It didn’t help that Jacksonville played most of the final three quarters without star running back James Robinson because of an ankle injury.

Robinson appeared to injure his ankle after catching a 17-yard screen pass in the final seconds of the first quarter. He was listed as questionable and seemed to be testing out the ankle on the sideline during the second quarter. He never returned.

Jacksonville snapped its 20-game losing streak two weeks ago beating Miami in London. The Jaguars have yet to put together consecutive wins since midway through the 2019 season.

It’s unclear when Wilson will return following his finger surgery. With a bye next week, there is a chance Seattle’s franchise quarterback could be ready Nov. 14 when the Seahawks travel to Green Bay.

If that’s the case, Smith’s time as the starter went out on a high.

Smith’s previous two starts were punctuated by late mistakes. Against Pittsburgh, it was a fumble in overtime that set up the Steelers’ winning score. Last Monday against New Orleans, it was a series of costly sacks.

But Smith was decisive with his decisions Sunday and made a point of getting Lockett involved early. Lockett had just four receptions in the previous two games combined. He had three catches in the first quarter and eight by halftime against Jacksonville’s pass defense that entered the week ranked 31st in the league.

Lawrence’s late touchdown meant he has never been shut out in any game in his career at Clemson or his first season in the NFL. The late TD also avoided just the second shutout of head coach Urban Meyer’s career. Meyer’s only time being shut out as a head coach came in the 2016 Fiesta Bowl when Ohio State lost 31-0 to Clemson.

Seattle inducted former coach Mike Holmgren into the team’s "Ring of Honor" during halftime. Holmgren is the 14th honoree in franchise history. Holmgren coached the Seahawks from 1999-2008 and took Seattle to its first Super Bowl appearance after the 2005 season. Holmgren went 86-74 in the regular season with Seattle and won five division titles.

Seahawks: Seattle has its bye.