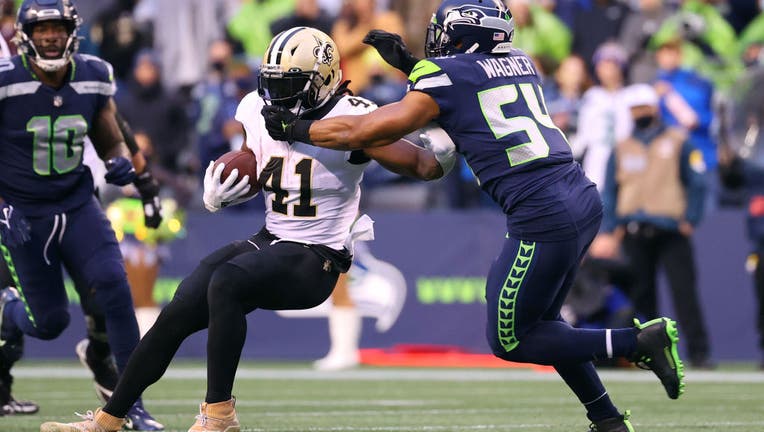 SEATTLE, WASHINGTON - OCTOBER 25: Alvin Kamara #41 of the New Orleans Saints is tackled by Bobby Wagner #54 of the Seattle Seahawks during the first quarter at Lumen Field on October 25, 2021 in Seattle, Washington. (Photo by Abbie Parr/Getty Images)

SEATTLE - There is little optimism surrounding the Seattle Seahawks right now between their three-game losing streak to sitting in last place in the NFC West.

But the Seahawks may have turned a corner defensively.

"I think some of the biggest strides have been in the pass coverage, for me," Seattle linebacker Bobby Wagner said. "I think we’ve done a lot better in that area. Third downs have been a big one too."

Seattle has held two straight opponents under 350 yards heading into Sunday’s home game against Jacksonville — although the improvement lost some of its importance with the Seahawks losing both games.

Highlighting that kind of statistic would have seemed laughable during the prime years of Seattle being on top of the NFC, but it is a major change.

For four straight weeks, the Seahawks gave up more than 450 yards in each game, tying a league record for futility. No team has done that in five straight games — and Seattle avoided that fate by starting its defensive turnaround two weeks ago against Pittsburgh.

The Seahawks started getting off the field on third downs with regularity. They were better at not giving up explosive plays. And it continued last week against New Orleans, holding the Saints to just 13 points and 304 yards.

Context is important, though. Pittsburgh’s offense is ranked 27th in total offense and New Orleans is 29th. This week may not yield any more answers about where Seattle’s defense stands facing a Jacksonville offense that is 27th in the league in scoring.

A major reason for Seattle’s improvement is its third-down defense. The Seahawks have been the best in the league over the past four weeks at getting off the field, allowing conversions on just 21.6% of third-down opportunities.

Through the first three weeks, teams were converting at nearly 50% on third down against Seattle.

"We’ve become more aggressive in all aspects of what we’re doing and it’s just gotten better," Seattle coach Pete Carroll said. "And it’s been obvious. It’s made a difference in how we’re playing and it’s kind of led us into one of the best games we played this past weekend."

There also have been some scheme adjustments. Seattle has played primarily with five defensive linemen and two linebackers in its base packages. One of the changes Seattle made was sliding Al Woods more toward the edge in a role similar to what Red Bryant played nearly a decade ago for the Seahawks, Carroll said.

Seattle’s defense should get a boost with pass rusher Darrell Taylor expected to return this week. He was inactive against the Saints, a week after getting taken off the field in Pittsburgh on a backboards as a precaution because of a neck injury. Carroll said Wednesday that Taylor, who leads Seattle with four sacks, is on track to be available against the Jaguars.

NOTES: Carroll said safety Marquise Blair was expected to undergo surgery Wednesday or Thursday to repair a fractured right patella suffered late in Monday’s loss. Blair will miss the rest of the season. Blair tore his ACL in the same knee early in the 2020 season. ... Carroll declined to name a starter, but said Ethan Pocic will get snaps at center this week. Kyle Fuller has struggled and didn’t play well against New Orleans.