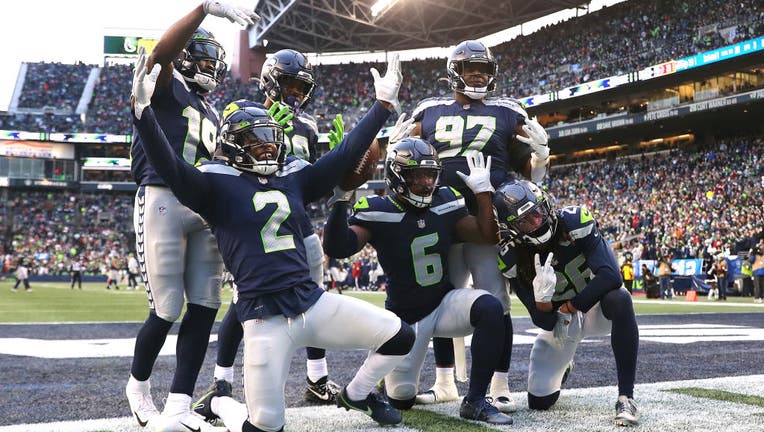 SEATTLE, WASHINGTON - DECEMBER 05: The Seattle Seahawks celebrate during the third quarter against the San Francisco 49ers at Lumen Field on December 05, 2021 in Seattle, Washington. (Photo by Abbie Parr/Getty Images)

SEATTLE - In the middle of the locker room after their first win since Halloween, Pete Carroll shouted "We ain’t dead yet, boys!"

Technically, that’s correct. The Seattle Seahawks aren’t dead in the sense of still having a small percentage chance of reaching the postseason, even though it seems highly unlikely.

But what Seattle showed on Sunday in its 30-23 win over San Francisco should be recognized. Having lost six of seven and sitting at 3-8 entering the week, the Seahawks could have easily punted on the season.

Instead, Carroll and his veteran leaders such as Russell Wilson and Bobby Wagner found the right words to get the Seahawks to buy in, for at least one more week and keep alive those small percentage chances of finding their way back into playoff contention.

And they played aggressively and in some ways without caution for the first time since before Wilson was hurt back in early October. It was a victory that was sometimes ugly, sometimes mistake-filled, but wildly entertaining.

"It’s the guys that keep the message strong," Carroll said. "We work real hard to stay connected. It’s not like everybody’s pointing the finger out here. That’s not what’s happening, from me on down. It’s really important that we hang together, so we’ve made it a big issue."

Seattle’s run defense against San Francisco was exceptional, especially considering what the 49ers had been doing in recent weeks. The Niners were averaging 178.3 yards per game in the previous three games, but were held to 71 yards on 25 carries. Elijah Mitchell had 66 yards on 22 carries after running for 133 yards a week earlier against Minnesota.

While Seattle’s run defense was great, its own run game continues to languish even with the addition of Adrian Peterson. Take away Travis Homer’s 73-yard touchdown run on a fake punt, the Seahawks got 58 yards on 23 carries from their running backs. Peterson had 16 yards on 11 carries but did score his 126th career touchdown, tying Jim Brown for 10th all time.

If there was a sign of improvement, Seattle had failed to top 20 rushing attempts in any game during its three-game losing streak.

Carlos Dunlap is admittedly in a weird spot. He’s being asked to play less than he ever has in his career, while believing he needs to be on the field more. But his production, or lack thereof to date, doesn’t support his argument of more play time.

But Dunlap was productive on Sunday in his limited chances. He used just his right hand to pull quarterback Jimmy Garoppolo down for a safety in the third quarter that pulled Seattle even at 23-23. And on San Francisco’s final play, Dunlap was able to get his hands up in time to deflect Garoppolo’s pass and end the 49ers’ threat of a comeback.

Dunlap played seven snaps and was credited with one tackle for loss, one sack, one QB hit and one pass breakup.

"They’ve been looking for me to make these plays all season. I hadn’t quite made them and had whatever you want to say going on," Dunlap said. "But today I came through. It is as simple as that."

Gerald Everett had a forgettable game on a day Seattle seemed focused on trying to get him the ball. Everett fumbled on Seattle’s second offensive possession when he couldn’t hold a quick screen. He bobbled a potential touchdown early in the third quarter, and it became an interception when he inadvertently kicked the ball into the air and it was grabbed by K’Waun Williams. And the capper came in the closing minutes when a shovel pass to Everett and a possible touchdown was fumbled at the San Francisco 2.

Everett had two fumbles in 70 games prior to Sunday.

"I have no doubt what Gerald Everett is going to do, how he’s going to respond," Wilson said.

Safety Jamal Adams sprained his surgically repaired shoulder in the first half and did not return. Carroll did not have an update on his status on Monday. ... RT Brandon Shell left Sunday’s game early because of a lingering shoulder issue and may not be able to play this week. ... Carroll said G Damien Lewis, who has missed the past two games, should be able to play on Sunday at Houston.

33:12 — Seattle won the time of possession battle for the first time all season. The previous high for Seattle was 29:37 in its loss to Pittsburgh, a game that went to overtime. In the previous three weeks, the Seahawks had failed to top 21 minutes of possession.

The Seahawks will be heavily favored this Sunday going to Houston and with the rest of the NFC playoff picture a giant jumbled mess, there is a chance for Seattle to inch a little bit closer. Take care of business in Houston and there could be a little bit of meaning for the Seahawks trip to Los Angeles to face the Rams in two weeks.