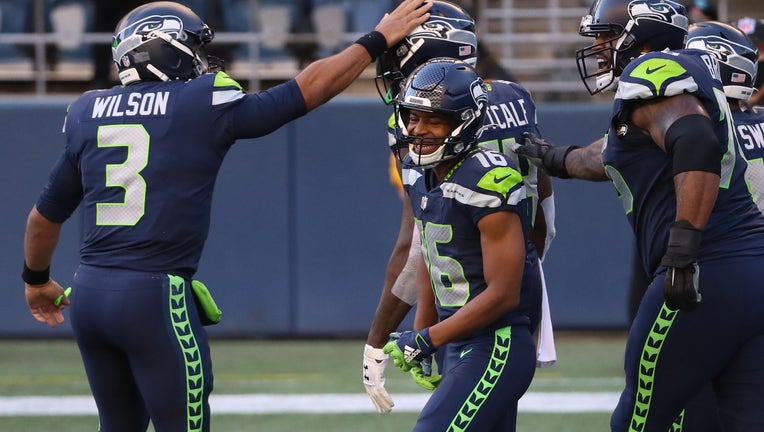 SEATTLE, WASHINGTON - NOVEMBER 01: Quarterback Russell Wilson #3 of the Seattle Seahawks celebrates with teammate DK Metcalf #14 after a touchdown in the second quarter against the San Francisco 49ers at CenturyLink Field on November 01, 2020 in Seat

This is the largest group of players the Seahawks have sent to the Pro Bowl since 2017.

Wilson is a Pro Bowler for the eighth time in his nine-year career, according to the Seahawks.

The Pro Bowl will not be played this season because of the COVID-19 Pandemic, but players were still selected to receive honors.

Mahomes and Rodgers are the starters, though there will be no actual game this season because of the COVID-19 pandemic. On Jan. 31, the players will be celebrated during two Pro Bowl-themed shows airing on an ESPN/ABC simulcast, with a virtual Pro Bowl experience within the Madden NFL 21 video game.

Roster selections were determined by votes of players, coaches and fans.

RELATED: Tenth season may not be end for Seahawks LB K.J. Wright

Other notable selections include Titans running back Derrick Henry, the NFL’s leading rusher, and highly productive receivers Keenan Allen of the Chargers and Stefon Diggs of the Bills for the AFC’s offense. On defense, linebackers T.J. Watt of Pittsburgh and Darius Leonard of Indianapolis, Miami ball-hawking cornerback Xavien Howard, and Cleveland end Myles Garrett made the squad.

In all, there were 26 first-time Pro Bowlers.