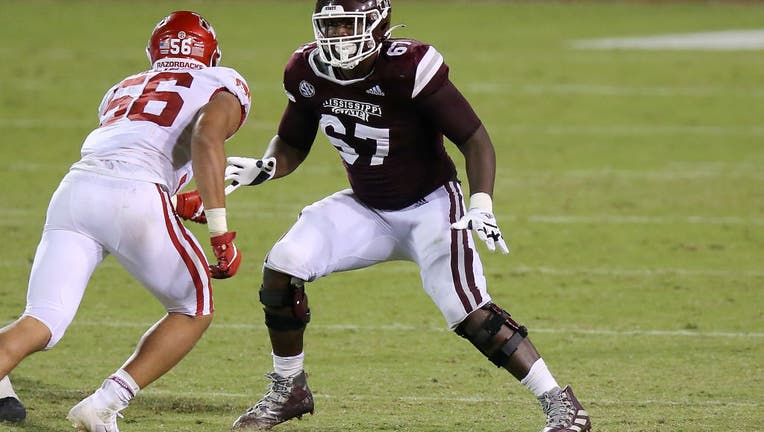 STARKVILLE, MISSISSIPPI - OCTOBER 03: Charles Cross #67 of the Mississippi State Bulldogs in action against the Arkansas Razorbacks during a game at Davis Wade Stadium on October 03, 2020 in Starkville, Mississippi. (Photo by Jonathan Bachman/Getty I

RENTON, Wash. - The Seattle Seahawks got some much-needed help to bolster their offensive line by selected Mississippi State tackle Charles Cross with the ninth overall pick of the NFL Draft on Thursday night.

"We're just really excited that we have a pillar at left tackle," general manager John Schneider said of the selection following the first round Thursday night.

Cross, 21, was the third offensive tackle to be selected behind North Carolina State's Ikem Ekwonu (No. 6, Carolina Panthers) and Alabama's Evan Neal (No. 7, New York Giants).

Cross was a two-year starter at left tackle for Mississippi State. He was a first-team All-American and first-team All-SEC selection last year for the Bulldogs. He started 22 games over the last two seasons.

"It's a blessing. I'm excited. I'm excited I'm going to Seattle to be with the 12s, some of the best fans in the league.," Cross told reporters via a conference call Thursday night.

Cross said he had a few different conversations with the Seahawks, including a formal interview with them at the NFL Combine in February.  When Seattle was on the clock, he thought there was a decent chance the Seahawks would pick him.

"I kind of expected it to be honest," he said.

With Duane Brown and Brandon Shell both still free agents, the Seahawks needed help at tackle. While Jake Curhan appears as possible option at right tackle, the addition of Cross gives the Seahawks a potential long-term answer on the left side.

Schneider and head coach Pete Carroll made it clear that he will be their option at that spot moving forward.

"He's just an excellent prospect to be a left tackle and he's played against great competition," Carroll said.

"You can see his footwork. I know that he had 700 passes last year but he can run block too. He can really move his feet and he can get off the ball and do the cut-off blocks on the ba

Seattle Seahawks fans gathered at the Hyatt in Renton to watch the 2022 NFL Draft. The Seattle Seahawks got some much-needed help to bolster their offensive line by selected Mississippi State tackle Charles Cross with the ninth overall pick of the NFL Draft on Thursday night.

ckside and the front side stuff and get on the second level and stay on his feet and really be agile about all of that."

Cross said his play against Alabama in each of the last two years were strong examples of the type of player he can be.

Carroll – using Cross' comments to reporters as a prompt – went back to watch tape of last year's game again just as a refresher of the way he played.

"They did a lot of games (stunts and twists) and he had a lot of switches to make good adjustments on," Carroll said. "They rushed at least four different types of rushers at him and he handled all of them. A couple of smaller guys, a couple of bigger guys. And that's a really good club too. And so it was just impressive."

It's the first time Seattle has made a selection in the top 10 of the draft since 2010, which was Pete Carroll and John Schneider's first year in charge of the team. Just as they did in 2010, the Seahawks used the pick to take an offensive tackle. Seattle selected Oklahoma State tackle Russell Okung with the sixth overall pick in the 2010 NFL Draft.

Cross played for former Washington State head coach Mike Leach for the last two years at Mississippi State. Leach runs the "Air Raid' offense, which calls for a lot of pass blocking and work out of a two-point stance. Despite the system he's played in the last two years, Cross said he played in a three-point stance in high school and during his first year at Mississippi State in 2019 before Leach's arrival.

Even though the Air Raid doesn't call for much run blocking, Cross said it's something he loves to do.

Evaluating prospects in a system that is so pass-heavy can be difficult as well in trying to project them to the next level. That's when Schneider said Cross playing against SEC-level talent was a benefit.

"The size and speed is just, I mean, it's just different, right?" he said. 'It's the closest thing to the National Football League. So when you're able to watch a guy compete against that type of competition. It just makes it that much easier to evaluate. We're going to harp on this but he's such a good athlete and he has such a good brain that we feel like you know, our coaches are going to be able to really help them out in terms of the quantity of the run game that's going to be placed on him."

Schneider said that they had a chance to trade up that "disappeared" on them and a couple chances to trade down that evaporated as well.

"But he came to us and so we're really pretty blessed that he was there," he said of Cross.

Schneider added that Cross was "a very close cut off" for players they were comfortable selecting with the ninth pick.

"There was three guys (at tackle) that everybody kind of saw. We feel like we were blessed enough to get one of them," Schneider said.

The Seahawks won't have to wait long tomorrow to add more to their roster. The team holds the 40th and 41st overall picks – the eight and ninth selections of round two, respectively.