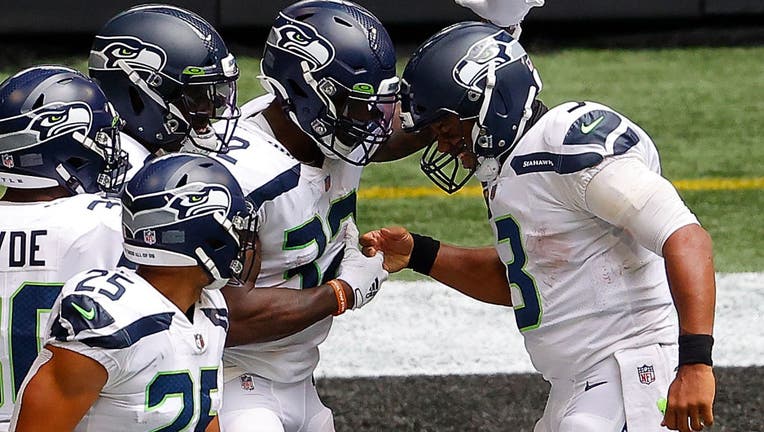 ATLANTA, GEORGIA - SEPTEMBER 13: Russell Wilson #3 of the Seattle Seahawks celebrates with Chris Carson #32 after a touchdown against the Atlanta Falcons at Mercedes-Benz Stadium on September 13, 2020 in Atlanta, Georgia. (Photo by Kevin C. Cox/Getty

RENTON, Wash. - Throughout its franchise history, the Seattle Seahawks have never started a season 5-0.

Not in the years Seattle was a contender in the old AFC West. Not after it moved to the NFC. Not even the year the Seahawks won their only Super Bowl.

Then again, the Seahawks have never had a quarterback playing as well as Russell Wilson has in leading Seattle to a 4-0 record heading into Sunday night’s matchup with Minnesota.

“I think we’re playing at the highest level that we’ve ever played,” Wilson said.

While the Seahawks are looking for a bit of franchise history before their bye week, the Vikings (1-3) are seeking validation that they can still be contenders for a playoff berth after a disappointing start. The Vikings have given up more points and yards than has been the norm for a Mike Zimmer team, and struggled with turnovers for the first few weeks.

But the Vikings did get their first win last week in a 31-23 victory at Houston. They do have the league’s leading rusher in Dalvin Cook. They have familiarity playing in Seattle for the third straight year and facing the Seahawks for the fifth time since 2015. And they’ll get a break as CenturyLink Field will be silent outside of what gets piped through the stadium speaker system.

“Before when we played there, that crowd noise was definitely an impact on what we had going on,” Cook said. “And today’s society is different without fans, so we’ve got to get used to that, and I think it might help us at the end of the day going against that type of environment.”

GET THE Q13 FOX APP FOR BREAKING SEAHAWKS NEWS

Wilson’s start to the season has placed him firmly in the MVP conversation at the quarter mark of the season. He tied Peyton Manning’s record with 16 TD passes in the first four games. He’s completing 75% of his passes, has just two interceptions and has topped 300 yards in three of the four games. Perhaps most impressive are the big shots Wilson has taken and completed. He already has 16 completions of more than 20 yards and is averaging 9.4 yards per attempt.

One of the bright spots for Minnesota has been Cook’s start to the season. He leads the league with 424 yards rushing and is averaging 5.7 yards per carry.

He’ll be facing a Seattle defense that ranks third in the league in yards rushing allowed, but hasn’t necessarily been tested. Todd Gurley in Week 1 and Ezekiel Elliott in Week 3 both had 14 carries against Seattle. That’s the most by any running back against the Seahawks this season. If Minnesota can stay with the run game, it could be the first significant test if Seattle’s run defense is very good.

“It’s definitely fun to watch him run the ball,” Seattle linebacker Bobby Wagner said. “It’s going to be fun to play against him and get into the backfield and really just tackle him.”

Last week at Houston, the Vikings turned all four of their trips inside the 10-yard line into touchdowns. Defensively, they limited the damage to a field goal after a first-and-goal situation from the 8 in the third quarter, and prevented the Texans from scoring late in the fourth quarter after they had second-and-goal from the 1.

They’ll be challenged by Seattle’s offense that until last week was perfect on the season, converting trips inside the 20 into touchdowns. Seattle has 13 TDs in 15 red zone trips.

Seahawks coach Pete Carroll was Minnesota’s defensive backs coach from 1985-89 and nearly became head coach of the Vikings in 1992, when they hired Dennis Green instead. But Carroll revealed this week a little-known anecdote about the 1987 strike season: He nearly put the pads on and played quarterback for the Vikings.

The Vikings signed Tony Adams to be their replacement-team signal caller instead, after offensive coordinator Bob Schnelker told head coach Jerry Burns he couldn’t bring himself to coach Carroll, who was supposed to be one of his peers on the staff.

“I was taking snaps out in the cul-de-sac until after midnight, trying to get ready to go,” said Carroll, who was 36 at the time. “The next day they were going to make the call on it, so it was real for a little bit.”