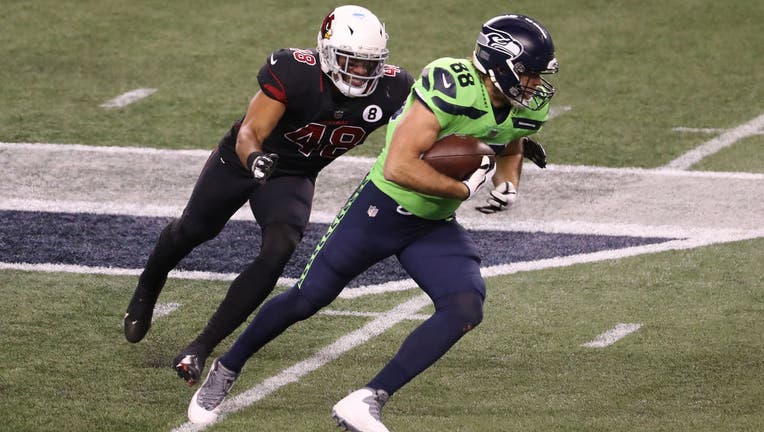 SEATTLE, WASHINGTON - NOVEMBER 19: Greg Olsen #88 of the Seattle Seahawks runs with the ball against Isaiah Simmons #48 of the Arizona Cardinals in the third quarter at Lumen Field on November 19, 2020 in Seattle, Washington. (Photo by Abbie Parr/Get

Olsen was designated for return to practice on Wednesday by the Seahawks, less than a month after he landed on injured reserve with a torn fascia in his left foot. At the time of his injury, Seattle estimated Olsen would be out at least a month and potentially upward of six weeks. That would have put his likely return at the end of the regular season or potentially not until the playoffs.

While it would seem unlikely for Seattle to have Olsen play this week against Washington, it’s not entirely out of the question.

“He’s made an extraordinary recovery to get to this right now,” Seattle coach Pete Carroll said. “So we’re gonna practice him during the week, see what happens, see how he does.”

Olsen was injured in the fourth quarter of Seattle’s 28-21 win over the Cardinals on Nov. 19. It was a non-contact injury and Olsen went down immediately.

Carroll said afterward that Olsen knew exactly what had happened and was determined to try and get back this season. In a post on Twitter following the injury, Olsen wrote, “I refuse to allow this to be my final moment. I will find a way to finish on my feet!” The message included a picture of Olsen getting helped off the field by trainers.

The 35-year-old Olsen is in his 14th NFL season and signed a one-year deal with Seattle last offseason. Carroll praised his effort and willingness in trying to get back so quickly.

“I mean there is no space other than he is the top of the list in all of those character principles about who he is and what he’s all about and what you can expect from him,” Carroll said.

“He’s amazing. I don’t even know how he got well this fast. I don’t have a clue how that happened, but he did. He’s dying to play right now. He wants to get out there. He’s a perfect competitor to have on your club.”

Olsen had 23 receptions for 224 yards and one touchdown in 10 games prior to getting injured. In the three games he’s missed, backups Will Dissly and Jacob Hollister have combined for 12 catches and one touchdown.

Carroll didn’t want to completely rule out Olsen from playing this week, although it seems a return for Week 16 is more likely.

“We’ll see. We don’t have any idea,” Carroll said. “He’s been working out with the guys. We’ve got to see how he does on the practice field.”

While Olsen was back on that practice field, Seattle held out starting right tackle Brandon Shell on Wednesday after he aggravated an ankle injury last Sunday against the New York Jets. Carroll said they remain optimistic Shell will play this week against Washington but wouldn’t know for sure until later in the week.

“I always kind of say the same thing, we’ll have to wait till the end of the week to see how it develops. Can’t call it now,” Carroll said.