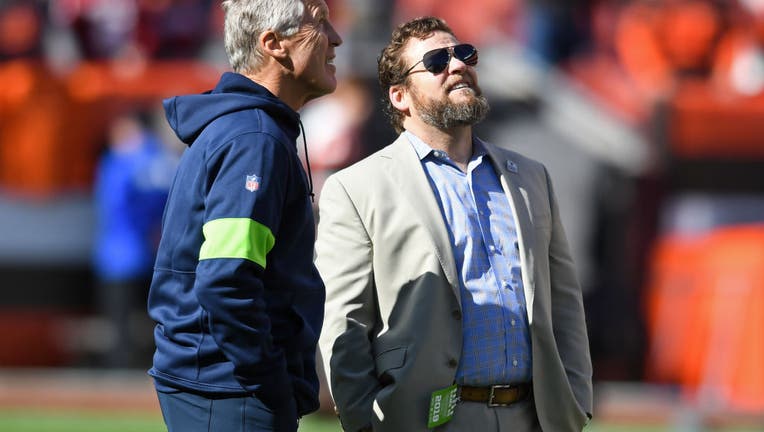 CLEVELAND, OH - OCTOBER 13, 2019: General manager John Schneider of the Seattle Seahawks talks with head coach Pete Carroll prior to a game against the Cleveland Browns on October 13, 2019 at FirstEnergy Stadium in Cleveland, Ohio. Seattle won 32-28.

RENTON, Wash. - Even with Russell Wilson's departure to Denver last month, Pete Carroll and John Schneider spoke of a renewed energy around the Seattle Seahawks ahead of next week's NFL Draft.

"I'm talking about the energy and the way we feel in this building," Schneider said. "Where we are, in our bubble, right, we feel awesome about it. We have an excitement about it. There's kind of a little bit of underdog feeling., It's refreshing and it feels fun. It feels competitive as crud."

"It's going to be different," Schneider said. "We haven't experienced it since the first year we were here. We had the two first round draft picks (that year) and so there's a lot of planning, a lot of thoughts that go through your head, a lot of different scenarios. We may pick it nine, we may not. We don't know yet. We're going to do whatever we can to help us football team as much as we possibly can. And its obviously exciting, but it's not necessarily a place that you want to be drafting."

While many fans assume the Seahawks are taking a significant step back – if not entering a full-blown rebuild – following the departures of Wilson and linebacker Bobby Wagner this offseason, Carroll and Schneider have both been firm in their intention to compete and win now. It seems as though Wilson's departure has lifted a bit of a weight off the franchise. Carroll and Schneider made similar statements of reinvigoration after the 2017 season when the team traded Michael Bennett and released Richard Sherman.

"The juice and the energy of the coaching staff. This is very hard to describe. I wish you'd be able to sit in here in a team meeting and feel it or feel it up in the hallways upstairs. It's just... I don't know. There's just a really cool juice going on," Schneider said.

NFL teams will tell you they generally only have 15-20 players with first-round grades in any given year. While there are 32 first-round picks, not every player selected in the round in viewed as a top-tier talent. Under that lens, it's been since Irvin's selection in 2012 that Seattle has been able to get a player they believed was of that class of talent. While having such a pick this year indicates Seattle is coming off a bad season, it is an opportunity to get access to a class of draft pick they've been unable to target

"There is definitely an excitement about this, because there's only so many things that can happen," Carroll said. "When you're picking 25th and 28th and down, you know, there's a million scenarios. This is not like that. It's a little different. So, there's a different level of excitement about the opportunity."

Schneider kept referencing back to the 2012 draft class that proved to be a pivotal point in the team's development toward their Super Bowl win the following season. The team had treaded water in 2011 after a surprise playoff run as NFC West champions in their first year together in 2010. While Okung, Thomas, Sherman, Kam Chancellor and K.J. Wright had already joined the team and built a foundation, it was the 2012 class that pushed it into the next echelon.

Schneider said the team's current excitement reminded him of how they felt heading into that draft.

"It just brought me back to this energy of like, you know, the 2012 draft when we over-drafted a pass rusher (Irvin) and we drafted a linebacker that didn't have any instincts (Wagner) and we drafted a quarterback that didn't fit the height mold (Wilson) and we over-drafted a nickelback (Jeremy Lane) and we over-drafted a third down back (Robert Turbin) and we converted a defensive lineman to an offensive lineman (J.R. Sweezy), who is still playing for those who are keeping track or he was last year. And then afterwards everybody giving us Fs. But the message is that in this building, we were super excited. We knew where we were headed. Pete and his staff had a great plan. It was loaded with competition and we're excited to see that competition."

The Seahawks have four selections in the first 72 selections, including the ninth overall and back-to-back second round picks at No. 40 and No. 41.