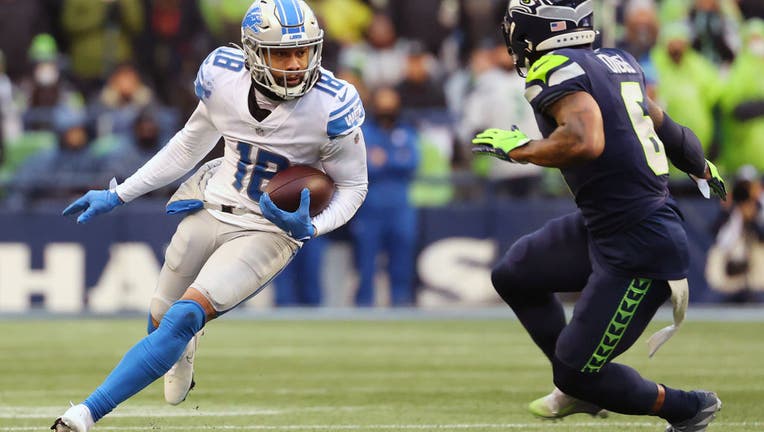 SEATTLE, WASHINGTON - JANUARY 02: KhaDarel Hodge #18 of the Detroit Lions carries the ball against Quandre Diggs #6 of the Seattle Seahawks during the third quarter at Lumen Field on January 02, 2022 in Seattle, Washington. (Photo by Abbie Parr/Getty

RENTON, Wash. - Free safety Quandre Diggs will make his first trip back to Detroit this weekend since his 2019 trade to the Seattle Seahawks travel to face the Lions on Sunday.

Diggs played four-and-a-half seasons with the Lions before he was traded to Seattle midway through the 2019 season. While Diggs has personally thrived in Seattle with multiple Pro Bowl appearances with the Seahawks, Diggs still has a fondness for the place where he started his NFL career.

"It's always a special place for me," Diggs said. "And even like watching on film, you know, just seeing the turf and seeing the fans in a stadium, it brings back memories, of course. I mean, Detroit is what made me into who I am now. So I'm forever grateful for my opportunity."

Diggs played nickel cornerback and safety during his time with the Lions. He found ways to excel in both roles before finding a home full-time at free safety in Seattle. The Seahawks benefited from Diggs falling out with key members of the Lions front office, including head coach Matt Patricia and general manager Bob Quinn.

Diggs had strong relationships with the coaches and staff that worked under head coach Jim Caldwell, who was the Lions head coach for Diggs' first three seasons with the LIons. However, Diggs, Darius Slay and other members of the Lions' roster didn't mesh with Patricia's operation. Diggs and Slay would be both traded out of Detroit as a result.

Diggs' issues with the Lions were specific to those individuals in charge at the time of his trade. They aren't there anymore with Dan Campbell taking over as head coach last season.

"I’m a pretty outspoken guy," Diggs said. "Some people can’t take that. So there you go.

"That’s a different regime now. Those guys are gone. Dan Campbell is in, I love what they are doing, so it’s cool to see those guys back on the right track."

Diggs is looking forward to reconnecting with the members of the organization he built strong relationships with before leaving three years ago.

"I spent my first four and a half years in the league in Detroit when they took a shot on the sixth-round guy from Texas," Diggs said. I might have not been me, I might not be who I am today. So I'm blessed. The Ford family, Jim Caldwell and that coaching staff. So I mean, that's what made me. Before I was here with you guys, I was in Detroit making a name for myself."

Diggs is now the veteran leader of Seattle's defensive unit. He was named a captain by his teammates before the start of the season and takes that baton from Bobby Wagner, who held it for the last several seasons on the defensive side of the ball for the Seahawks.

Diggs has started every game over the last two years for Seattle. He's had career seasons in Seattle with five interceptions in each of the last two seasons en route to Pro Bowl nods. He also had a career-high 93 tackles last season.

"I think moving to safety, it has become more of premier position and people look at it differently. I think people look at my game differently. At nickel, it’s hard to get interceptions, but when you’re in the post, you get your interceptions here and there when you take advantage of those. I kind of think that’s what it is," Diggs said of his increased recognition.

When Russell Wilson was traded to the Denver Broncos back in March, head coach Pete Carroll spoke about second chances for players such as Geno Smith and Drew Lock. He also mentioned the second chance Diggs took advantage of with the Seahawks after coming over from Detroit.

"You don’t know that Quandre stepped up in Detroit and said some stuff that he felt needed to be said in that program for whatever was going on. I don’t know what the story was all about, but when he did, he put himself in a light where he wasn’t in great favor there," Carroll said at the time.

"We were able to give him a second shot at coming to us and look what has happened with Quandre. We just signed him to a huge deal to be a great leader in our program. He's a magnificent player, back-to-back Pro Bowls and all of that kind of stuff. That's just because he got a second chance and did something with it."

In Seattle, Diggs has found the freedom to be himself. He had a similar experience under Caldwell in Detroit and was glad to find that experience again with the Seahawks.

As a leader on the defensive side, Diggs spoke up after Sunday's loss to the Atlanta Falcons stating unequivocally that the defense has to get better. They're allowing just shy of five yards per carry to opponents in the rushing game and Detroit has been the best rushing team in the league through three weeks.

Diggs said he's like the approach he's seen from his teammates so far this week as they prepare for the Lions on Sunday.

"We started on the right foot this morning, so that’s all that I can ask for," Diggs said. "We go out to practice and hopefully – I’m not going to say hopefully – we will have a good practice today. We will bring the energy and we go from there. We just have to keep building throughout the week. You can’t build one day and then be stagnant one day. You have to build, build, and build. Hopefully, we do that, and we keep going. That’s all that I can ask from the guys, that’s it."

The Seahawks placed running back Travis Homer on injured reserve as he sustained injuries to his ribs in Sunday’s loss to the Atlanta Falcons.

"It’s a really uncomfortable injury," Carroll said. "He’ll get better fast in a couple of weeks from now and we’ll just see if he can stand it. He’s as tough as you can get. If anybody can do it, he’ll do it."

In Homer’s place, Seattle promoted cornerback Xavier Crawford to the active roster. Crawford has been a call-up from the practice squad for each of the team’s last two games against the Falcons and San Francisco 49ers.He’s played 15 snaps combined on special teams for the Seahawks.

Defensive end Shelby Harris has rejoined the team after missing last week’s game against Atlanta. In addition to a gluteus injury, Harris was away from the team to deal with a family matter. Harris was injured just three snaps into the Week 2 loss to the 49ers.

"Because of the way things fell, he won’t go today," Carroll said. "But we’re testing him out with the trainers today. I talked to him a little while ago, he’s anxious to play this week. He thinks he can do it, but he’s got to show."

Cornerback Tre Brown is starting to make significant progress toward getting back on the field. Brown remains on the physically unable to perform as he rehabs from a torn patella tendon sustained last November. Carroll said that Brown has resumed running full speed, but noted he’s still a few weeks away from being able to get back on the field with the team.

"He’s still a few weeks away, but they’re now putting dates on it," Carroll said. "They think he has a chance to get back. I told him, ‘OK, they give you those dates, beat it and compete to come back sooner than that.’ So, it’s a couple weeks from now."

Edge rusher Alton Robinson is eligible to come off the injured reserve list next week, but Carroll said it will likely take him more time to be able to return to action.

"He’s got to come back and show it," Carroll said. "He’s been working to stay in shape and all of that. It may take a couple weeks to get him back in there."

Robinson banged his knee on the turf late in Seattle’s final preseason game against the Dallas Cowboys. The injury was significant enough to land on injured reserve for at least the first four games of the year.

Cornerback Justin Coleman (calf), Harris and guard Gabe Jackson (veteran rest) were the three players that did not practice on Wednesday. Coleman has missed the last two games after straining his calf in a practice ahead of the game with the 49ers.

Safety Joey Blount returned to limited participation in practice. He strained his hamstring the same day Coleman pulled his calf and has been sidelined since. Wednesday was his first day back on the field.