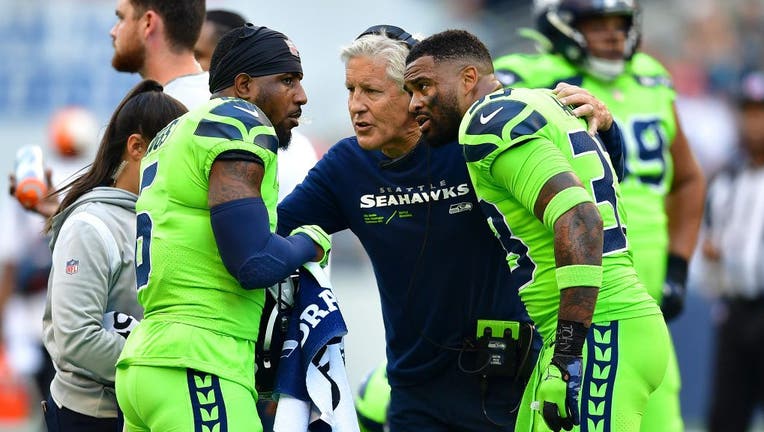 "I'm not sure how that's going to go at this point," head coach Pete Carroll said on Wednesday. "It's a quadriceps tendon, something that I don't know much about. He's getting all the information he can right now to make sure he knows what's next from our guys and other people as well. We've got time to do that so he's going to take the time to do it right and have his mind really clear on what's the next step."

Adams was injured while nearing sacking Denver Broncos quarterback Russell Wilson on a third-and-12 from the Denver 45-yard line. Adams blitzed from a linebacker alignment and slipped off Wilson as Wilson threw the ball away for an incompletion.

"It means so much to him and the frustration of having to go through not being healthy has just jumped out at him again," Carroll said. "And, you know, he's questioning and wondering and all that because he wants to be out here so much. He wants to be with the guys and doing what we do in every way you could possibly want to do that and so it's really frustrating for him. And all of us."

With Adams out the Seahawks will turn to Josh Jones as the starter at strong safety with veteran Ryan Neal also factoring into the position group as well. Jones played 53 defensive snaps for Seattle on Monday night against the Broncos with Adams' early exit.

"I've been just really pleased with Josh Jones," Carroll said. "Josh has done nothing but positive stuff since the day he got here. And since then, he's just kind of taking the next step and the next step. Coming to this camp, he had a great camp. He had the most turnovers. He had the most big plays and big hits of all of the guys. And so you saw him in the rotations already. He was already part part of the plan. And now he just takes a bigger step forward.

Neal has recovered from a high-ankle sprain that kept him sidelined for most of the majority of training camp.

– Running back Ken Walker III fully participated in practice on Wednesday and is tracking toward making his debut for Seattle on Sunday. Walker had a procedure to address a hernia issue after the team's preseason opener against the Pittsburgh Steelers last month.

"He did some stuff last week, which gives us an indication," Carroll said, while noting he's optimistic of Walker's chances to play. "But he's got to get through the work and let us know how he feels. As I've said it's an unusual injury, unusual recovery that he's coming back from from the surgery. And we're relying a lot on how he is telling us he feels and he's really excited and anxious to get going."

– Left guard Damien Lewis has a chance to return to action this week as well. However, Carroll said they won't know his status until the end of the week.

"Damien's got to get through the week and show us. We won't know until the end (of the week). But he'll get a lot of work. And particularly tomorrow's practice will be a big one for him coming back to Friday. That would be an important one."

Burns did not play against the Broncos on Monday night. Both Harris and Diggs finished the game against Denver.

The Seahawks made a handful of roster moves on Wednesday.

Long snapper Tyler Ott was placed injured reserve as he needs surgery to address a dislocated shoulder. Carson Tinker was promoted from the practice squad to handle snapping duties in Ott's absence.

Additionally, linebacker Tanner Muse was promoted from the practice squad to fill the vacancy created by placing linebacker Alton Robinson on injured reserve on Monday.

Both Tinker and Muse played against the Denver Broncos as practice squad elevations.

Safety Scott Nelson was re-signed to the practice squad after being released last week and linebacker Christian Jones was signed to the squad ahead of Wednesday's practice.

Nelson, an undrafted rookie out of Wisconsin, had been with Seattle throughout the offseason and was initially signed to the team's practice squad. He was released to create a spot for Tinker last week after Ott's injury in practice.

Jones in an eight-year NFL veteran that has had two stints with the Chicago Bears and a three-year run with the Detroit Lions. Jones has started 74 out of the 125 games he's played in for his career. He's missed just four games in his eight seasons due to injury.

Seattle's assistant head coach/defense Sean Desai was the defensive coordinator for Jones last year in Chicago and was a defensive backs coach for Jones' first stint with the Bears. He played in 17 games for Chicago last season while making one start.

"It's awesome," Hurtt said of Jones. "He's familiar with the system, he knows the defense. So that way it doesn't take a lot of time to get him up to speed for the most part. Most of the terminology and things like that as the same so should be a quick study for him."