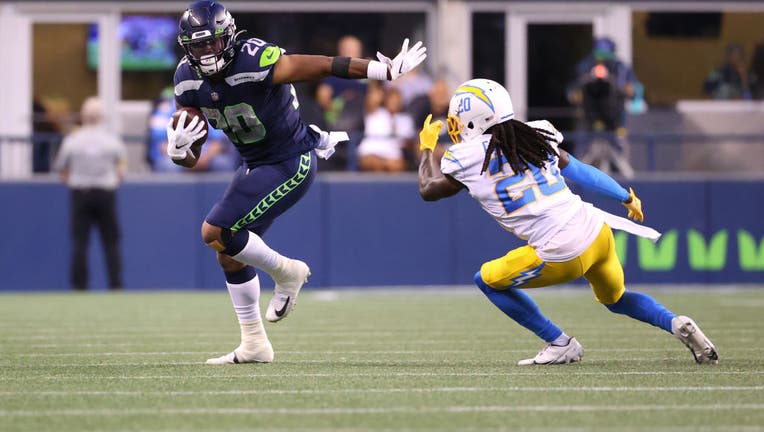 SEATTLE, WASHINGTON - AUGUST 28: Rashaad Penny #20 of the Seattle Seahawks carries the ball against Tevaughn Campbell #20 of the Los Angeles Chargers in the second qarte during the NFL preseason game at Lumen Field on August 28, 2021 in Seattle, Wash

RENTON, Wash. - Rashaad Penny was quick to address the ongoing issue of his ability to stay healthy and available for the Seattle Seahawks.

He’s really tired of finding himself on the injury report.

"I really don’t go out there to just miss games. I don’t come in here to miss games, miss practice. I really try to be available," Penny said Friday. "But sometimes your body says no. And unfortunately my body has been saying no to me a lot."

Penny is hoping for a run of good health beginning this week. He was designated to return to practice from injured reserve this week by the Seahawks with the expectation he will be added to the active roster ahead of Monday’s matchup with New Orleans.

The timing is critical for Seattle. With Chris Carson out and Alex Collins battered after last week’s game at Pittsburgh, it turns out Penny is likely the team’s healthiest running back this week. It could end up being the first start of Penny’s career.

"He’s been working out to be in great shape for the moment we are ready to bring him back," coach Pete Carroll said. "We have talked specifically about that throughout the return time and return opportunity so he is ready to go. He has to go and do it, it doesn’t mean anything until you go do it."

Penny’s latest ailment was a calf injury that popped up after the Week 1 opener at Indianapolis. Penny had two carries against the Colts, then has spent the past month as a spectator.

Penny said he doesn’t know how he got injured, just that the calf strain happened. He felt he could have returned to action sooner, but Seattle seemed fine with Carson and Collins and decided it would be best for Penny to go on injured reserve and be fully healthy when he returned.

"I’m just happy to play football again," Penny said. "I really try not to get hurt. I prepare the right way to do everything right. I thought losing the weight and coming in and doing what I do was perfect for me this year."

Penny has a long history of injuries that have slowed the career path of the 2018 first-round pick. His biggest setback was a torn ACL late in the 2019 season that kept him sidelined for the majority of 2020. Penny appeared in just three regular season games last season.

This year was supposed to be the chance for Penny to prove he should be in Seattle’s future plans. The Seahawks did not exercise the fifth-year option on Penny and he will be a free agent after the season.

Penny believes he will have the time and opportunity to show his value over the next couple of months.

"I think I’ve got enough games to prove what I can do. And like I said, it’s all about me being available," Penny said. "I think that’s the two biggest things I’ve been preaching this whole offseason is being available and being consistent."