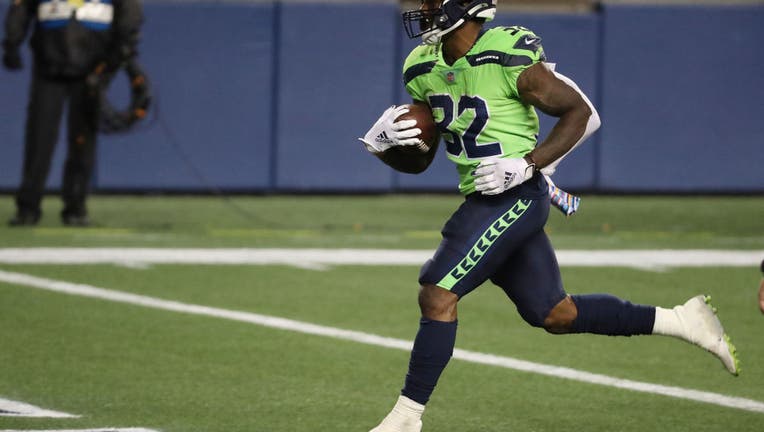 SEATTLE, WASHINGTON - OCTOBER 11: Chris Carson #32 of the Seattle Seahawks scores a touchdown against the Minnesota Vikings during the third quarter at CenturyLink Field on October 11, 2020 in Seattle, Washington. (Photo by Abbie Parr/Getty Images)

The Seattle Seahawks will be without their top two running backs for the second straight week.

Chris Carson and Carlos Hyde were ruled out Friday for Sunday’s game at Buffalo. Carson continues to be bothered by a foot sprain, while Hyde is dealing with a hamstring injury. Hyde’s status was in doubt from the start of the week, but Seattle was hopeful Carson would practice on Friday and have a chance to play.

But Carson did not make it back to the practice field and coach Pete Carroll said while there hasn’t been a setback, the Seahawks are going to take it easy with their top rusher.

“He hasn’t been able to do it enough to really have a setback,” Carroll said. “He’s got a sore foot. We got to make sure he gets through it. For other positions that might not be a big deal but in particular the way Chris runs, his breaks and cuts and all, he’s got to have it all there to play in style.”

DeeJay Dallas and Travis Homer will get the majority of the work in the backfield and Seattle may elevate Alex Collins off the practice squad for additional depth.

Dallas rushed for 41 yards and a touchdown, and had another five receptions and a TD catch, last week against San Francisco.

Carson and Hyde were two of six players the Seahawks ruled out ahead of leaving for Buffalo. Also not playing will be defensive end Benson Mayowa, who has a high-ankle sprain, and defensive backs Ugo Amadi and Shaquill Griffin, both dealing with hamstring injuries.

Q13's Jamie Tompkins introduces us to a local household divided between Seahawks and 49ers fans.

One big player returning for Seattle is safety Jamal Adams, who practiced all week and will play for the first time since Week 3. Adams missed three games with a groin injury and last week had his return delayed when he came down with a non-COVID illness.

Carroll said Adams would have no restrictions on his playing time.

“He looked great this week. He was flying. I don’t see any reason to restrict him at all,” Carroll said.

Seattle will also see the debut of Carlos Dunlap following his trade from Cincinnati. Dunlap’s first game with the Seahawks should help offset the absence of Mayowa.

“I’m counting on him to show and do well,” Carroll said.