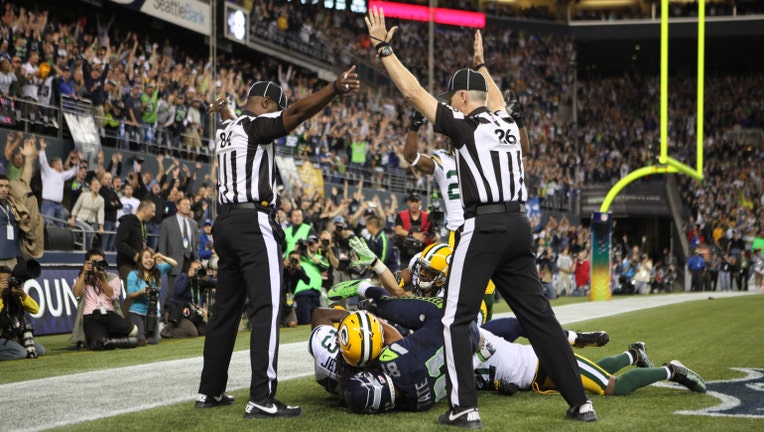 Wide receiver Golden Tate #81 of the Seattle Seahawks makes a catch in the end zone to defeat the Green Bay Packers on a controversial call by the officials at CenturyLink Field on September 24, 2012 in Seattle.

SEATTLE -- It all started with the "Fail Mary".

On Sept. 24, 2012, Russell Wilson's third game as an NFL Quarterback, the Seahawks trailed the Packers 12-7 with seconds to play. A national Monday Night Football audience held their breath as Wilson heaved an impossible dream of a pass into a group of players in the end zone. The ball was touched (or controlled) by both Seahawks’ receiver Golden Tate and Packers’ defensive back M.D. Jennings as both came down with the ball.

One official signaled touchdown. The other signaled a touchback and a stoppage of the clock. The “replacement refs” conferred and eventually ruled that it was a "simultaneous possession" and Seattle was awarded the game-winning touchdown.

The fallout from that call was immediate. Players, fans and analysts nationwide called it a travesty. Some insisted the NFL should overturn the ruling, and award the victory to Packers. The public outcry forced the NFL to end their contract dispute with the referee’s union, and the “replacement ref” experiment ended with a thud.

That game was anything but a “fail” for the Seahawks. It was a turning point for the franchise. It was a moment of redemption.

While others claimed that the Seahawks had “stolen” that victory from the Packers, for Seattle fans, it felt like justice. It felt sweet, knowing that a pivotal moment in sports history went OUR way. Finally. The entire nation saw it. Luck, for once, was on our side.

Seattle had just lost the Sonics a few years before to Oklahoma City. Hawk fans still feel the sting of Super Bowl XL, in which several controversial calls went against Seattle, and likely cost the Seahawks the game. We were named “America’s most miserable sports city” for several years running. But on that night, the Sports Gods smiled on Seattle. And from that point on, things changed.

The Seahawks, and the 12s suddenly had a sense that anything could happen with this football team. Anything was possible. “Why not us?” Russell Wilson asked. And the 12s nodded in agreement. Why not us, indeed!

Wilson and the Hawks struggled to find their footing in that 2012 season. But miraculous things started happening on the field. Two weeks after the “Fail Mary”, the Seahawks were clinging to a 16-12 lead in Carolina, with the Panthers driving for the winning touchdown deep in Seahawks territory, when Earl Thomas forced a fumble. The Hawks recovered, and escaped with a stunning victory.

The following week, the Hawks hosted Tom Brady and the Patriots. With 1:18 to play, Russell Wilson connected with Sidney Rice for the game-winning touchdown. I remember walking out of CenturyLink Field hooting and hollering, chanting Sea-HAWKS, along with other giddy 12s.

Something amazing was going on, and we were just starting to get an inkling. 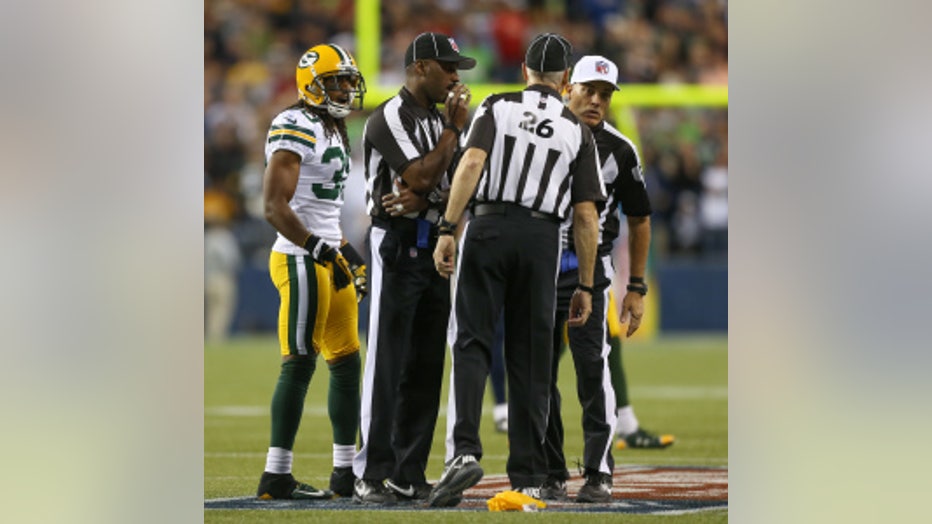 On Dec. 23, 2012, the Hawks were fighting for a playoff berth, when they hosted the San Francisco 49ers. The Seahawks destroyed the Niners in front of a national TV audience. The country was introduced en masse to the deafening noise inside the Clink, as the newly-coined “Legion of Boom” physically dominated the eventual NFC Champions.

The Seahawks destroyed the Niners 42-13. With that performance, the Seahawks said, “Yes, America. We really are THAT good.”

The Hawks were on the verge of greatness. They knew it. And they weren’t afraid of it.

They took their newfound swagger into the opening round of the playoffs, winners of five straight games, when the Seahawks traveled to Washington, D.C. to face the Redskins. The storyline heading into that game was “Who is the better rookie quarterback? Robert Griffin III, or this upstart 3rd round draft pick Russell Wilson?” We know the answer to that question now.

On that day, the Seahawks defense once again imposed their will, forcing Griffin out of the game with a knee injury, as the Hawks came from behind to win Seattle’s first road playoff game in 30 years.

If there’s any single game that forged the will of this football team, it was the Divisional Playoff Game in Atlanta . The Seahawks overcame a 20-point

“Why not us?” Russell Wilson asked.

deficit in the 4th quarter, and took the lead with 31 seconds left. The stunned Georgia Dome crowd was dead silent.

But there was too much time left. Falcons QB Matt Ryan completed a few passes, got his team into field goal range, and Matt Bryant’s 48-yard FG with :08 to play sealed it. The Seahawks’ season was over.

I was in the locker room that day in Atlanta. I saw a lot of heads hanging, with teary eyes. That Seahawks team knew they were capable of beating any team in football. They truly thought that a Super Bowl was their destiny that season, despite the difficult road they were forced to travel as a Wild Card team.

They were so close.

Pete Carroll brushed away tears in that postgame press conference. He praised Russell Wilson and the courage of his team. He talked about the future. He said the Hawks needed to get in a position to host playoff games, and they would be very difficult to stop.

Russell Wilson then stepped to the podium. “Big things are ahead for us”, he said.

“I’m not afraid of greatness”, he said. 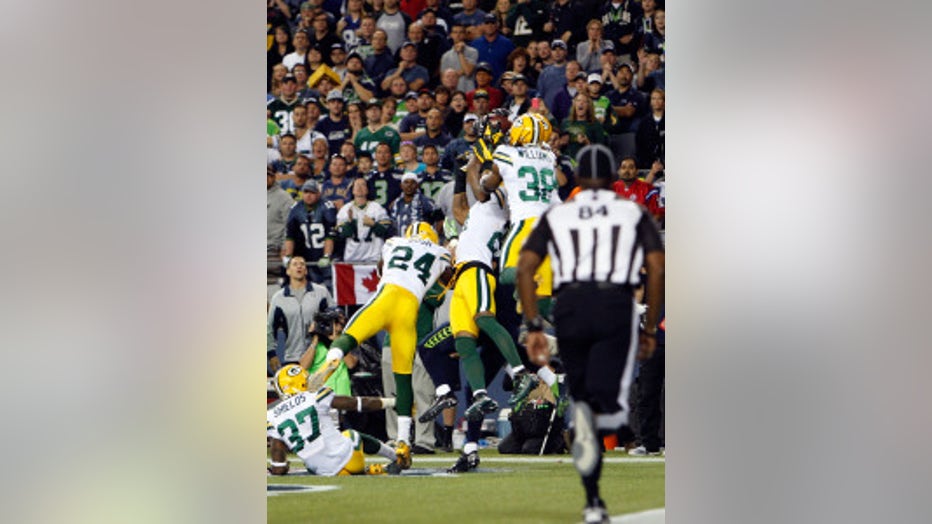 Golden Tate #81 of the Seattle Seahawks makes the game winning catch as time expired behind a swarm of Green Bay Packers at CenturyLink Field on September 24, 2012 in Seattle.

“I can’t wait for the offseason so we can get back to work”, he said.

The Seahawks have won four titles since then: Two NFC West Championships, a Conference Title and the Super Bowl. It’s interesting to me that it’s the Packers the Seahawks host for the NFC Championship on Sunday.

The “Fail Mary” against Green Bay is what started all of this.

Interesting, also, that the Seahawks fortunes changed in the ’12 season (I have a thing about the number 12).

You can watch Sunday’s NFC Championship on Q13 FOX. Of course, kickoff is at 12 p.m.