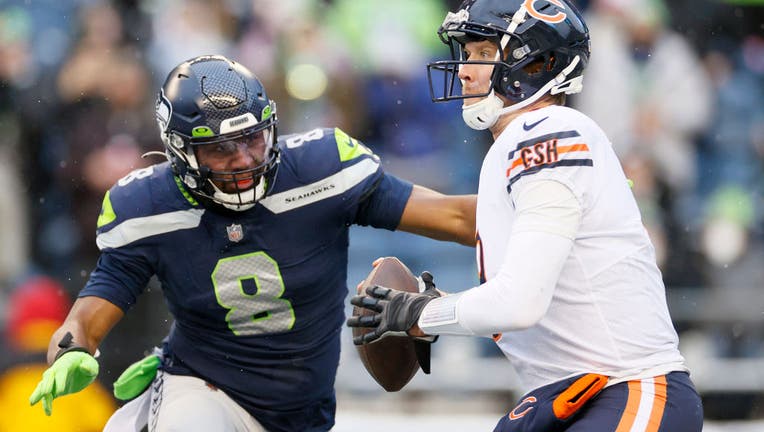 SEATTLE, WASHINGTON - DECEMBER 26: Nick Foles #9 of the Chicago Bears is pressured by Carlos Dunlap #8 of the Seattle Seahawks as he attempts to throw the ball during the third quarter at Lumen Field on December 26, 2021 in Seattle, Washington. (Phot

Dunlap, 33, was acquired by Seattle in a trade with the Cincinnati Bengals midway through the 2020 season. He finished the season with five sacks in eight games played for the Seahawks in bolstering a struggling pass rush. Dunlap re-signed with Seattle last season after being cut for contractual reasons.

Dunlap finished the season incredibly strong with eight of his 8.5 sacks coming in the team's final six games.

Per Jeff Howe of The Athletic, Dunlap's release comes with a post-June 1 designation, which saves Seattle $5.1 million in salary cap space this year, per OverTheCap.com. Dunlap will carry $4.2 million of cap obligations into 2023 for the Seahawks.

Hyder, 30, signed with Seattle last offseason after one season with the San Francisco 49ers. Hyder appeared in 15 games with seven starts for Seattle last season. He had 33 tackles, 1.5 sacks and 11 quarterback hits.

The release of Hyder will save Seattle $1.95 million in cap space, per OverTheCap.com.

The release of Dunlap and Hyder – along with that of Benson Mayowa – speak to Seattle's intention to move their defensive scheme more toward a 3-4. The three pass rushers aren't ideally suited for the defensive philosophy the Seahawks are moving to under new defensive coordinator Clint Hurtt.