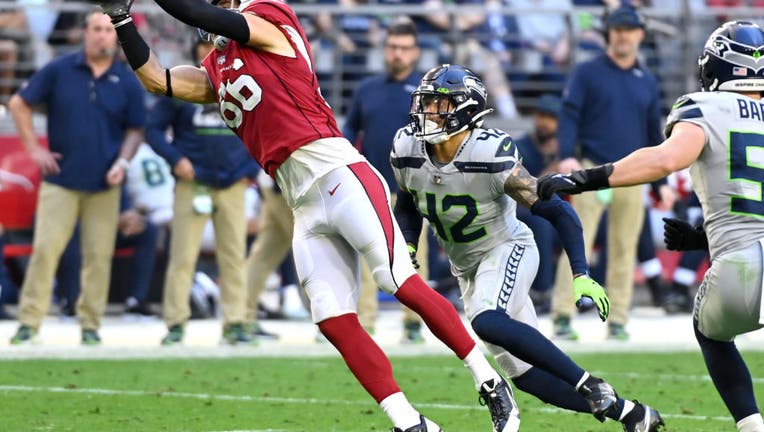 GLENDALE, ARIZONA - JANUARY 09: Zach Ertz #86 of the Arizona Cardinals catches the ball in front of Josh Jones #42 of the Seattle Seahawks during the second quarter at State Farm Stadium on January 09, 2022 in Glendale, Arizona. (Photo by Norm Hall/G

Jones, 27, appeared in four games for the Seahawks last season, including a start at strong safety in the team's season finale against the Arizona Cardinals. Jones had 10 total tackles in the game and a pass defended in 52 total snaps played.

Jones a second round pick of the Green Bay Packers in 2017 and appeared in 29 games with 12 starts for the team over two seasons. He's since spent time with the Dallas Cowboys, Jacksonville Jaguars, Indianapolis Colts, and Seahawks. Jones recorded 126 tackles, an interception, three sacks and seven passes defended in his two years as a regular withthe Packers.

Scott, 26, spent time on the Seahawks' practice squad last season and signed a reserve/future contract with the team in January.

Scott was an undrafted free agent out of Division II Frostburg State in 2019. He's spent time with eight NFL teams over the last four seasons, but has played in just six games with the Cincinnati Bengals in 2018.

Safety is a position the Seahawks did not address with their nine picks in the NFL Draft last weekend.

The second phase of the Seahawks' offensive program began on Monday with players being able to workout on the field. Previously they had been limited to strength training activities.