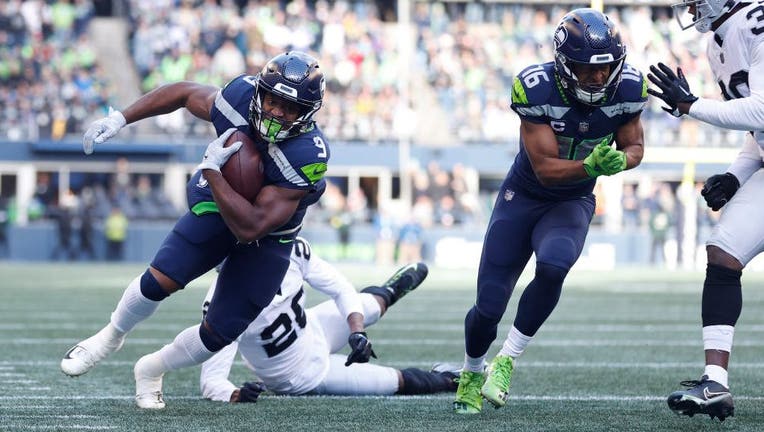 SEATTLE, WASHINGTON - NOVEMBER 27: Kenneth Walker III #9 of the Seattle Seahawks runs with the ball in the first quarter against the Las Vegas Raiders at Lumen Field on November 27, 2022 in Seattle, Washington. (Photo by Steph Chambers/Getty Images)

RENTON, Wash. - Running back Ken Walker III was not listed on the final injury report of the week for the Seattle Seahawks and is expected to play against the San Francisco 49ers on Thursday night.

Head coach Pete Carroll said they'll take every minute they can to make sure Walker – and other ailing Seahawks – are able to play.

"We just have to use every minute that we have. So we’re just waiting," Carroll said.

The Seahawks had limited practice time this week with the quick turnaround from Sunday's game. Walker was listed as a full participant in practices on Tuesday and Wednesday.

"He finished the week doing well so we'll see what happens," Carroll said. I don't have a lot of information on a number of guys because we're gonna take every minute of it and so I won't be able to satisfy you but he did really well. I was really pleased and he looked really quick out here."

Walker missed Sunday's game against the Carolina Panthers due to an ankle injury sustained the prior week in a win over the Los Angeles Rams. Walker "jammed" his ankle in the second quarter and was unable to return to action.

"Ken is dealing with an old injury that jumped back. He has been through it before in years past, and we just have to get him through it," Carroll said of the injury on Sunday.

"He's got an area of his ankle that sort of jammed and so there's some strained tissue in there, but it's not an ankle sprain," Carroll said last week. "It's not a high-ankle sprain. It's not a lateral ankle sprain like we normally report on. It's different than that."

The Seahawks' rushing attack has really struggled in recent weeks. Over the last four weeks, no single rusher has gained more than the 37 yards DeeJay Dallas managed against the Rams. Seattle has managed just 354 rushing yards on runs from running backs or receivers over the last six games, averaging just 3.3 yards per carry over that span. Seventy-four of the team's 132 total rushing attempts over those six games have been held to three yards or less, with 34 carries over no gain or negative yardage.

By Seattle's own definition, they've managed just eight "explosive" runs in those six games. The Seahawks call runs of at least 12 yards and passes of at least 16 yards as "explosive."

Cornerback Tre Brown (illness) and safety Joey Blount (back) are also questionable. Brown has picked up the same illness that has hit multiple players on the team in recent weeks. It kept defensive end Shelby Harris out of the Panthers game as well, but Harris is set to return to the lineup Thursday night.