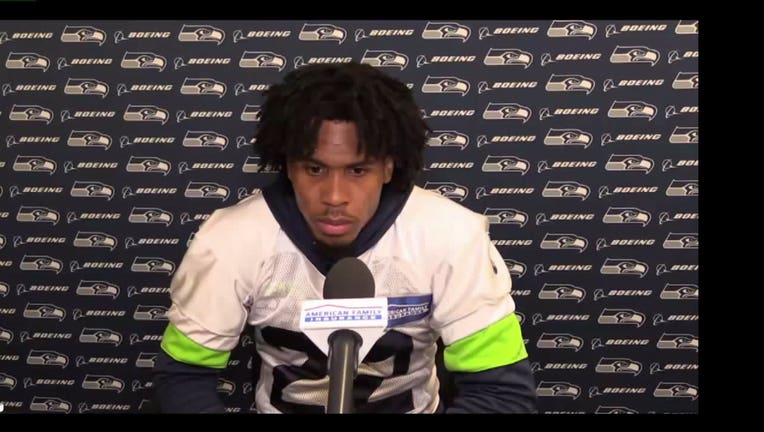 RENTON, Wash. - New Seattle Seahawks cornerback Quinton Dunbar said Friday he understands he could still be punished by the NFL even after armed robbery charges against him in Florida were dropped.

Dunbar declined to speak in detail about what led to him being arrested and charged in Broward County, Florida. He said the ongoing case against New York Giants defensive back DeAndre Baker, who was formally charged with four counts of robbery with a firearm in the same incident, prevents him from speaking at length about what happened in May.

Prosecutors announced the charges against Baker earlier this month while also saying Dunbar would not be prosecuted due to insufficient evidence.

“I can’t really comment on that situation with the ongoing case still going on,” Dunbar said via video conference. “So I can’t really speak on what happened, but the truth will eventually come out.”

According to an arrest warrant, Baker and Dunbar were attending a cookout in Miramar, Florida, when a fight broke out and Baker pulled out a handgun. Baker and other men then began robbing people of thousands of dollars, watches and other valuables, witnesses told investigators.

Baker, who is accused of stealing cash and watches from four men, faces a mandatory minimum of 10 years and up to life in state prison if he is convicted.

While declining to talk in-depth about his arrest, Dunbar did provide some details. He said he never met the people who accused him and Baker until the day before the incident. Dunbar said following his arrest, he was depressed and knew a conviction could bring a life sentence.

Dunbar said he felt he had no issues with his reputation prior to the arrest.

“I felt like before that situation it spoke for itself. Never been to jail, never been in trouble. Never came into an encounter with police for doing anything illegal,” Dunbar said. “Now all of a sudden when I make it this far, where everything I grew up wanting, I just put it out there on the line for something silly like that. People are going to believe what they want but know that I know who I am and what I stand for. That’s all that matters to me.”

He also acknowledged some form of punishment from the league could still be pending. “There’s definitely a possibility. ... So, who knows. I’m not saying it’s going to happen or it’s not going to happen,” Dunbar said.

Dunbar was cleared to begin practicing with the Seahawks last weekend after he was removed from the commissioner’s exempt list and went through COVID-19 intake testing. It was his first time in Seattle following his offseason trade from Washington to the Seahawks.

Seahawks fans will not be cheering from CenturyLink Field for the first three home games.

For now, the Seahawks are trying to get Dunbar up to speed with their defense and he acknowledged he’s behind because of the lack of on-field reps. Before his off-field troubles, Dunbar was expected to move into the starting lineup of a remodeled secondary that added All-Pro safety Jamal Adams just before the start of training camp.

Dunbar said getting plenty of reps in practice between now and Week 1 is important if he’s going to feel comfortable in the opener against Atlanta.

Coach Pete Carroll said the team plans to increase Dunbar’s workload over the next week in the hope he’ll be ready for the start of the season.

“Not having OTAs and those things, and then to come in here late and being in a new defense is not like (you can) go out there and get no reps and understand the defense from a fast-paced standpoint and being out there know what you can do, knowing what you can’t do. I’ve got a long way to go,” Dunbar said.