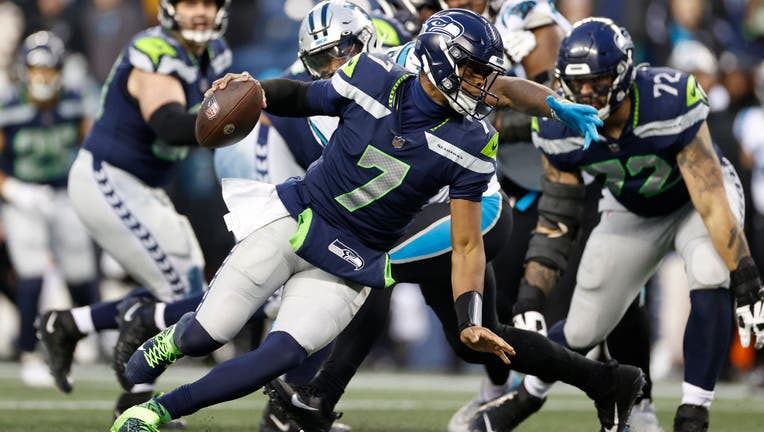 SEATTLE, WASHINGTON - DECEMBER 11: Geno Smith #7 of the Seattle Seahawks scrambles with the ball during the fourth quarter of the game against the Carolina Panthers at Lumen Field on December 11, 2022 in Seattle, Washington. (Photo by Steph Chambers/

RENTON, Wash. - Seattle Seahawks quarterback Geno Smith said he's been a bit overly aggressive in recent weeks and is looking to dial it back ahead of Thursday night's game against the San Francisco 49ers.

"I think I've been too aggressive as of late," said Smith, "and so I've got to kind of get back to what I was doing early on, which was just taking what they give me and allowing us to have a complimentary football team where we all play together and not feel like we're just trying to push the envelope or trying to push our limits and see what we can do. Because we know what we can do. But we got to stay on schedule."

It was after a Week 2 loss to the San Francisco 49ers when the offense was held scoreless in a 27-7 loss that head coach Pete Carroll said he needed to let Smith and the offense loose.

"He’s clearly in command of it, poised, and we need to not hold back at all," Carroll said in September. "I kind of implied that we could have thrown the football more with the opportunities that we had, and with the trust that we have in him, we need to do that. When it’s given to us, we need to take advantage of it, and we don’t have to hold back at all."

Smith has been sublime for most of the year for the Seahawks. Smith has completed 71.5 percent of his passes for 3,433 yards with 25 touchdowns and eight interceptions. He's led a game-winning drive against the Los Angeles Rams and multiple fourth quarter scoring efforts with results hanging in the balance. He's validated the team's decision to trade Russell Wilson this offseason and has outperformed Wilson to almost unbelievable levels this year.

Sunday's effort against the Carolina Panthers wasn't Smith's best. He was intercepted twice and had some off-target throws that were uncharacteristic given his performances this year. The first interception by Jaycee Horn is the one Smith is likely referring to when speaking to being overly aggressive. While rolling to his left, he tried to hit Tyler Lockett on a deep crossing route only for Horn to sink off of coverage of DK Metcalf to make the interception.

"Jaycee made a great play," Smith said after the game on Sunday. "He is a really good player. He made a great play. It happens in the NFL. It was the first play of the game. Obviously you don't want to start that way, but I feel like we responded well, and we had more opportunities late in the game to really win it. We just couldn't get it done. That's unfortunate."

The interception led to a quick Carolina touchdown and eventually a 17-0 hole that the Seahawks couldn't overcome.

"We were down early in that game, so part of that was my mistake early on," Smith said of the interception. "When you are trying to get back into a game, you don’t want to throw a check down and feel like you are giving up, so you are trying to make a big play or get things going, get some momentum. For me, again, I have to get back to what I was doing, which I haven’t really changed much, but I have been a little more aggressive than usual, so I have to be smarter."

Smith's play is not the reason for Seattle's recent skid. He has continued to play strong football while the team's rushing defense and rushing offense have both cratered around him. The run defense is allowing nearly 210 rushing yards per game over the last four weeks and their own rushing offense hasn't allowed a Seattle running back to get even 40 yards rushing in a game since early November. A 37-yard effort from DeeJay Dallas against the Rams is the best rushing output Seattle has had since Ken Walker III rushed for 109 yards against the Arizona Cardinals on Nov. 6.

But for Smith, he can only make the best decision he can on each play regardless of what is happening with the rest of the team. That's where he's felt he's gotten away from himself in recent games.

"It really should just be me out there playing and doing the right thing every single play," Smith said. "It really comes down to that. Obviously, like I said, I’m just trying to win the game and you can’t win it on one play, but I am trying to score points and give us a spark. Obviously, that can’t be to our detriment, so it’s me just going out there, playing smart football, getting the ball in the hands of our playmakers, being on time, protecting our offensive line, and I think things will work out."