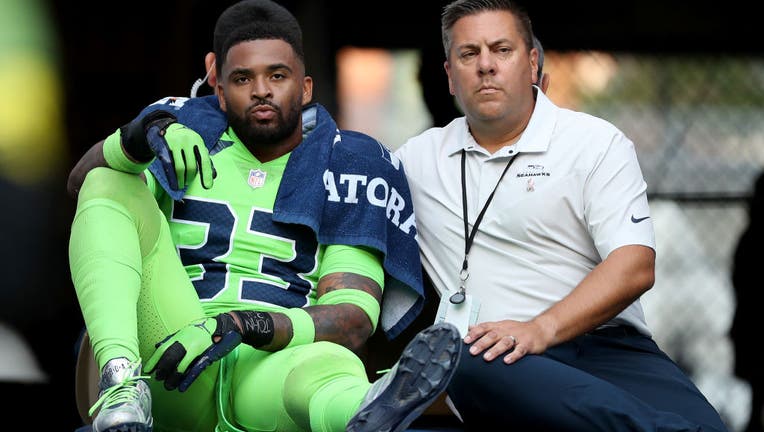 SEATTLE, WASHINGTON - SEPTEMBER 12: Jamal Adams #33 of the Seattle Seahawks is carted off the field with an injury during the second quarter against the Denver Broncos at Lumen Field on September 12, 2022 in Seattle, Washington. (Photo by Steph Chamb

RENTON, Wash. - The Seattle Seahawks will be without safety Jamal Adams for the rest of the season after a quadriceps tendon injury sustained Monday night against the Denver Broncos.

Per Ian Rapoport of the NFL Network, Adams is set to have surgery to address the injury, though exactly where and when the procedure will take place is still undetermined.

The Seahawks placed Adams on injured reserve on Thursday and signed safety Teez Tabor off of the practice squad of the Atlanta Falcons to fill the roster vacancy.

"It's a quadriceps tendon, something that I don't know much about," head coach Pete Carroll said on Wednesday. "He's getting all the information he can right now to make sure he knows what's next from our guys and other people as well. We've got time to do that so he's going to take the time to do it right and have his mind really clear on what's the next step."

Adams was injured while nearing sacking Denver Broncos quarterback Russell Wilson on a third-and-12 from the Denver 45-yard line. Adams blitzed from a linebacker alignment and slipped off Wilson as Wilson threw the ball away for an incompletion.

"It means so much to him and the frustration of having to go through not being healthy has just jumped out at him again," Carroll said. "And, you know, he's questioning and wondering and all that because he wants to be out here so much. He wants to be with the guys and doing what we do in every way you could possibly want to do that and so it's really frustrating for him. And all of us."

It's the latest in a significant run of injuries for Adams since joining the Seahawks in 2020 after a trade with the New York Jets.

Adams has had to have shoulder surgery after each of the last two seasons to address labrum damage. Additionally, he had surgery to fuse two fingers on his left hand that constantly became dislocated over the past two years. One of those fingers broke again in the first practice of training camp this summer.

Adams also missed four games in 2020 due to a groin injury.