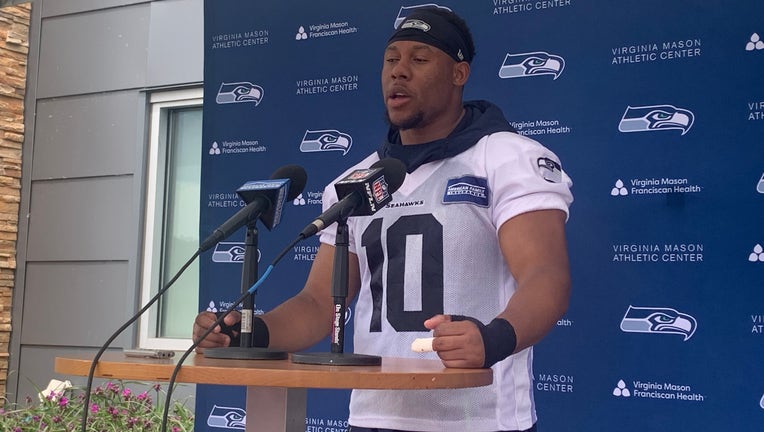 RENTON, Wash. - The Seattle Seahawks have spoken all offseason about the changes they are making on the defensive side of the football under new coordinator Clint Hurtt.

The fact the Seahawks are making changes is well known. Exactly how those changes are going to look is still developing. What's clear is that the Seahawks are going to move toward more of a 3-4 front defensively as their base package. While principles of that scheme have always been a part of Pete Carroll's defenses, it's now going to become more of the primary component.

The 3-4 scheme uses three bigger defensive linemen with two outside linebackers also on the line of scrimmage as stand-up edge rushers. The linemen try to force double teams so the rushers get 1-on-1 chances and the linebackers can flow to the football. It can also create confusion over which players will actually rush the passer on any given play. That can pose challenges to the opposing quarterback to diagnose correctly.

"Generally your best rush opportunities come in your five-man rushes with both guys coming off the edge," defensive coordinator Clint Hurtt said this week. "You've already set the protection with man-to-man across, 5-0 protections, but you got to change your looks and where you're bringing things from and what not."

Added safety Ryan Neal: "The biggest differences is the front seven and that's what I'm most excited about, because we've got some hungry young dogs down there. And I think what the defense is going to do for them is put them in better positions to play the game that they know how to play. Last year, we had a couple of issues, but this year, I can really see us like fixing it and letting people rush who's supposed to rush, letting people cover who's supposed to cover and that's just really the tweak. It's just a simple change."

Linebacker Uchenna Nwosu played in a similar scheme last season with the Los Angeles Chargers under head coach Brandon Staley. While there are some small differences with the scheme and how the verbiage used to detail it, he already knows how the defense works and what it does best. Nwosu emphasized how important the line of scrimmage is for making the scheme work.

"Oh, it definitely starts up front, you know," Nwosu said. "Those big D-lineman in the middle and the two edge players on the edge is definitely what makes this defense go. From playing in it last year, we had our ups and downs in certain situations, but the guys up front, specifically the guys with their hands in the dirt and the outside backers, they're the ones that's supposed to make this defense go. The defense is made for us to make plays and fly off the ball and be disruptive. So if edge players and D-lineman aren't going then the defense is a total wash."

Nwosu also spoke about the benefits of creating that little more doubt for opposing offenses with the pass rush schemes.

"Keeping them off their toes, always giving them different looks, not being in the same coverage or being in the same front," Nwosu said. "You always got to mix it up to keep them on their toes. That's an advantage of the 3-4 scheme is being able to give offenses so many different looks and having to play guessing games with them and make the quarterback hold that ball for extra second."

Darrell Taylor, coming off 6.5 sacks last season, played in a similar scheme at the University of Tennessee and believes it suits his skills well.

"I definitely think it just allows our outside backers to be more versatile, you know, as far as run, pass, whatever it may be," Taylor said. "I think it's going to help us and it's going to be exciting, just being able to have that and then elevate it."

Hurtt said that he anticipates still playing a lot of nickel coverages to combat the passing games of their opponents. When the team is playing nickel, the defensive fronts will more closely resemble the 4-3 looks Seattle has been accustomed to previously.

Generally, overall, we're going to play a lot more of our nickel stuff that we've had in the past, you know, and still be multiple, we still have the ability to do that. So there'll still be guys in the traditional sense still being on the edge and rushing the passer in your traditional 4-3 looks, that stuff is still going to be a part of the system. We just have a lot of different things that we can do," Hurtt said.