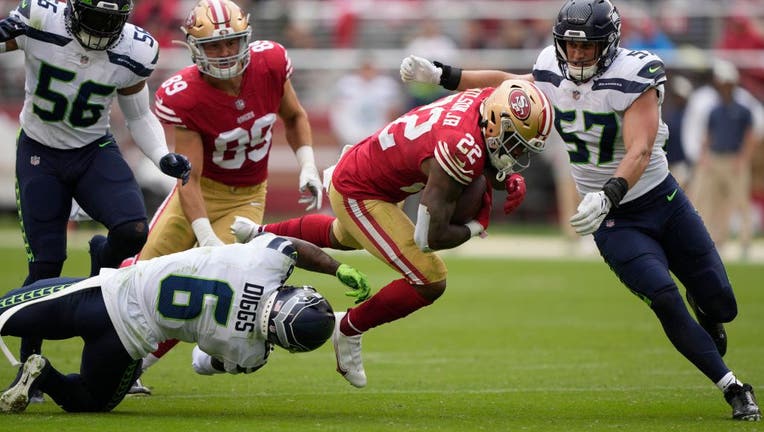 SANTA CLARA, CALIFORNIA - SEPTEMBER 18: Jeff Wilson Jr. #22 of the San Francisco 49ers gets tripped up by Quandre Diggs #6 of the Seattle Seahawks during the third quarter at Levi's Stadium on September 18, 2022 in Santa Clara, California. (Photo by

SANTA CLARA, Calif. - Coach Pete Carroll knew it wouldn’t be easy for the Seattle Seahawks to follow up their emotional, season-opening win with another inspired performance.

Boy, was he right.

Six days after knocking off former quarterback Russell Wilson and the Denver Broncos, almost nothing went right for the Seahawks. The offense failed to score a point, a trick play backfired and they were dominated in the trenches by the San Francisco 49ers in a 27-7 loss on Sunday.

"We didn’t look very good, did we?" Carroll said. "We didn’t do very well with that. Wanted to, and intended to and had it all figured out from way back when, and to win that game it was going to be a challenge. We took it head on, but didn’t do well enough with it. We didn’t come back and play the way we wanted to play. We missed tackles, just didn’t look the same. So I have to do a better job."

The Seahawks (1-1) were held to 216 yards for the game, drove inside the San Francisco 40 just once before the final drive and were outrushed 189-36.

Safety Quandre Diggs said there was no reason why Seattle should have had any kind of mental hangover from last week.

"If it it was, it’s the league that will humble you quick," he said. "We were humbled today and it’s just part of it. I don’t see why we would be riding high. Everybody’s doubting us anyway. We shouldn’t be feeding into all the hype anyways. Obviously, we’re not that good."

The offense led by Geno Smith struggled to get going at all against San Francisco’s stellar defense. After a scintillating first half of the opener, the Seahawks haven’t scored a point on offense the past six quarters.

Smith was accurate but didn’t produce much. He completed 24 of 30 passes but only gained 197 yards as Seattle had just one play generate more than 17 yards. Smith threw an interception early in the second quarter.

"We just didn’t do what we needed to do today," Smith said. "Had a great week of practice, preparation was on point, feel like everybody was locked in. We had good energy the entire time. We just made some mistakes we couldn’t recover from."

The biggest mistake came the following drive after Seattle got inside the San Francisco 10. The Seahawks called for a trick play with a direct snap to Kenneth Walker III, who handed to fellow running back DeeJay Dallas.

Dallas forced a throw to DK Metcalf in the end zone, but Charvarius Ward intercepted it.

"It was a really cool play to call, and we had a shot, too, but it asked a lot," Carroll said. "In that situation, I wish I just would have gotten us out of it. I looked at it and I just needed to get us out of it, and I didn’t get it done. That’s a huge turnaround. We screwed that up. We get in the end zone right there, it could have been entirely different."

Seattle then muffed a punt late in the half that set up another San Francisco touchdown and was unable to mount anything after falling behind 20-0.

The only score came on a blocked field goal return by Michael Jackson.

"Quite a distance from one week to the next," Carroll said. "This league just reminds you how you get humbled. We didn’t do anything like we wanted to today at the line of scrimmage, on either side of the ball, we didn’t do things right. It would have been very hard to win this game today with the way we played. We can’t play football like that."

The Seahawks got on the board in the third quarter thanks to their special teams. Tariq Woolen blocked a 20-yard field goal attempt by Robbie Gould, and Michael Jackson scooped it up and ran 86 yards for the score.

Dwelley had a big day on offense and special teams. Along with the TD catch from Garoppolo, Dwelly also recovered a muffed punt after Tarvarius Moore pushed blocker Xavier Crawford into returner Tyler Lockett.

Dwelley was the first player in the NFL to catch a TD pass and recover a fumble by the opponent in the same game since teammate Kyle Juszczyk did it against Atlanta on Dec. 15, 2019.

That recovery set up Juszczyk’s 1-yard run that it 20-0 at the half.

The Seahawks called for a trick play in the second quarter that they immediately regretted. DeeJay Dallas took a handoff following a direct snap to Kenneth Walker III and tried to force a pass into the end zone to DK Metcalf. Charvarius Ward was right there for his first interception for San Francisco.

49ers: TE Tyler Kroft (knee) left the game in the second half and didn’t return.