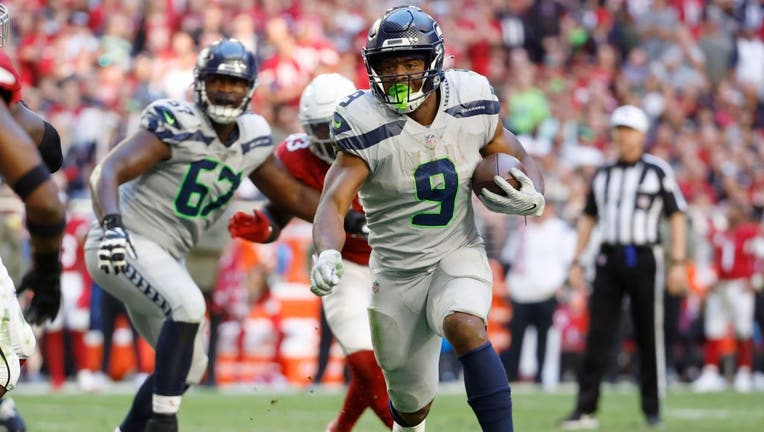 GLENDALE, ARIZONA - NOVEMBER 06: Kenneth Walker III #9 of the Seattle Seahawks runs in the third quarter of the game against the Arizona Cardinals at State Farm Stadium on November 06, 2022 in Glendale, Arizona. (Photo by Chris Coduto/Getty Images)

RENTON, Wash. - Not only is the offense of the Seattle Seahawks showing it can score points consistently each week, they're now starting to show they can be closers as well.

In victories over the New York Giants and Arizona Cardinals the last two weeks, Seattle's offense has taken control of the ball and delivered timely touchdown drives that put the games away. A five-play, 75-yard touchdown drive capped by a 33-yard touchdown pass to Tyler Lockett was the dagger in the 27-13 win over the Giants a week ago. Then on Sunday, a 13-play, 81-yard march that ended on a 1-yard touchdown from Ken Walker III served as the decisive blow.

Against the Cardinals, the Seahawks converted their final seven third down opportunities as part of a pair of touchdown drives that seized command of the game.

"To me, there is nothing more impressive than finishing well," head coach Pete Carroll said.

"We’re trying to outlast our opponents. We’re trying to outlast them doing right; no mistakes, no fidgets, no flinches at the line of scrimmage, no sloppy hands, making the right choices in their calls, and just doing things exactly the way they are supposed to be done under the most duress of the finish of the game. I just love to see our guys do that."

That finishing kick for Seattle began right after their biggest mistake of the day. Geno Smith was picked off by linebacker Zaven Collins, who returned the interception for a 30-yard touchdown that gave the Cardinals a 14-10 lead.

But Smith and the Seahawks coolly answered with three straight touchdown drives to put the game away.

"Our guys just kicked into it and just took it to the next level of execution; that takes toughness, smarts, preparation, and all that. There is nothing more admirable than that to me and our guys did a perfect job," Carroll said.

And just for comparison, Smith completed 68.2 percent of his passes on third down last year in relief of Wilson. He converted eight first downs on 22 pass attempts (36.3 percent conversion rate).

"We know that he’s going to come through, just give him a chance. What a bounce back," Carroll said of Smith. "What a fantastic finish to this game. I think we converted seven straight third downs to end the game, and that’s awesome."

Additionally, 78 of Walker's 109 rushing yards against the Cardinals came in the second half. That included 29 yards on four carries on Seattle's final possession of the game as the Seahawks looked to bleed the remaining time off the clock.

"For him to be a rookie, those are the things that the best backs in this league do," Smith said of Walker. "He’s so tough. He’s so good. He’s only scratching the surface. I can’t wait to just see how he continues to grow because right now he’s leading this offense and this team. He’s making it hard on defenses."

These are the things really good offenses do when they have a chance to win a game in the fourth quarter. The offense has generally produced numbers throughout the first nine weeks of the season. Now they're showing they can produce in the biggest moments as well.

"That’s what we are shooting for," Carroll said. "If you are going to be a really good team, you have to have to be able to do that consistently. So, we learned how to do that and we’re learning how to do that. We really captured it yesterday and it was a real hallmark of what we did on that day’s work."