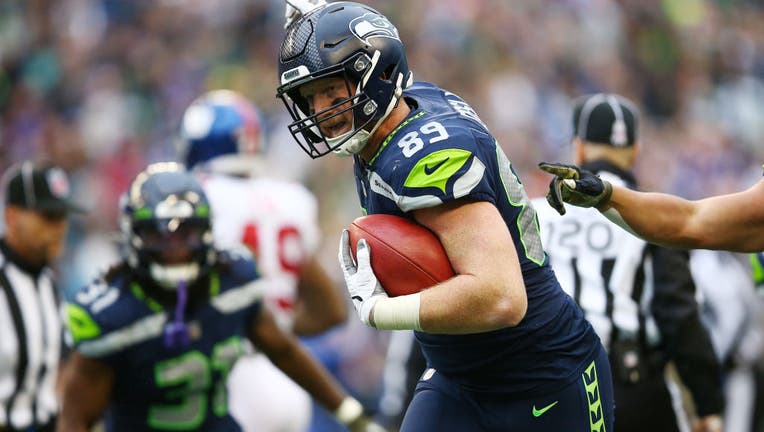 SEATTLE, WASHINGTON - OCTOBER 30: Will Dissly #89 of the Seattle Seahawks celebrates a fumble recovery during the fourth quarter against the New York Giants at Lumen Field on October 30, 2022 in Seattle, Washington. (Photo by Lindsey Wasson/Getty Ima

RENTON, Wash. - Tight end Will Dissly earned NFC Special Teams Player of the Week honors for forcing a fumble and recovering a fumble in Sunday's 27-13 win over the New York Giants.

Dissly usually isn't on special teams for Seattle. However, with linebacker Nick Bellore out due to a concussion, Dissly filled in and came up with two big plays. He hit returner Richie James to force a fumble that was recovered by safety Joey Blount and led to a Seattle field goal. Then in the fourth quarter, Dissly recovered a James fumble forced by running back Travis Homer that led to Ken Walker III's insurance touchdown.

"We're happy and fired up to see that Will Dissly got recognized as NFC special teams player of the week," Carroll said. "It was interesting that he had to jump into these additional roles this week because of roster situations and when given the opportunity he came through in a big way. Those two plays were really huge plays in the game and it would have been a much more difficult day without that. So a great recognition and good to see that."

Jones became the odd man out for Seattle with Michael Jackson and Tariq Woolen locking down the starting jobs on the outside. With Artie Burns back healthy, Tre Brown nearing a return from the PUP list, and Isaiah Dunn recovering from a hamstring strain, Seattle has plenty of depth at the position.

"We do have depth and Tre Brown will be practicing full-go this week," Carroll said. "I think we're only a week away from Isaiah coming back also. And Artie is ready to go. Artie is primed and ready. So we have real good depth right now. Maybe better than we have had. And so that's why we are where we are right now."

Brown has missed the first eight weeks of the season on the PUP list as he recovers from last November's patella tendon injury. Dunn has been on injured reserve on Oct. 23. Burns has been dealing with a groin injury since training camp, but appears to have finally gotten beyond the issue for the time being.

Jones was the starting left cornerback entering training camp before a concussion knocked him out of practice. Jackson stepped in and won the starting job and hasn't given it back since, though Jones did rotate with Jackson at the position for a few games.

No trades at deadline for Seahawks:

While the NFL saw 20 separate trades in total and 10 on Tuesday alone ahead of the league's trade deadline, the Seahawks didn't make any moves. Though Carroll said they had been exploring available options.

"We were in conversation on a lot of stuff," Carroll said. "Yeah, we were talking about a lot of stuff. Nothing worked out, obviously. But yeah, we were going. Just like always. Just the way we do it. And John was really active and burning the phones up and stuff just to know what was available and who was out there and all that kind of stuff. But nothing fit."

It's reasonable to assume Seattle had tried to trade Jones before releasing him on Tuesday afternoon.

The Seahawks are set to get players such as Brown, Dunn, and linebacker Darryl Johnson and Alton Robinson back from injured reserve in the coming weeks, which lessened the urgency to add to the roster right now.

On Ken Walker III's 16-yard touchdown run in the fourth quarter against the Giants, the play was initially supposed to run off right tackle. DK Metcalf, split out wide to the left, would typically be a non-factor in such a run.

However, Walker quickly bounced the run back left after seeing Giants defensive tackle Leonard Williams filling his lane to the right. Metcalf saw Walker's cutback attempt. He then immediately sprung into acting mode. Taking off for the corner of the end zone and feigning a catch attempt as Giants cornerback Adoree' Jackson trailed him intently.

"I used to do that in high school and act like I wasn’t going to get the ball because teams used to try to double me all the time," Metcalf said.

The sell job worked as Jackson ran out of the end zone with Metcalf as Walker found the end zone to make it a 27-13 game.

So did Jackson say anything to Metcalf after the play?

He said, ‘F-you,'" Metcalf said. "He said it jokingly after Ken scored."

Metcalf was limited in practice on Wednesday.

– Wide receiver Penny Hart has a chance to return to action this week after missing the last three games with a hamstring strain.

"There's a chance that Penny Hart gets back out there and that's a good boost," Carroll said.

– Center Austin Blythe was limited in practice on Wednesday after sustaining a knee sprain in Sunday's win over the Giants.

"Austin looks like he can work today. So that's a that's a real positive for us," Carroll said.

– Cornerback Tre Brown will have another full week of practice with a chance to potentially re-join the active roster this weekend.

"I think the trainers are going to want to see him sustain more solid days in a row before they really cut him loose," Carroll said on Monday. "But he practiced last week and he practiced with us and he was going full speed, but in limited numbers. So they'll increase his numbers for sure and just see how he handles it and make an assessment at the end of the week. We're not going to rush to get him back after all the time he's been out. But he looked good last week, so I wouldn't be surprised if he's pushing by the end of the week to say he looks like he can play."

– Linebacker Darrell Taylor and wide receiver Marquise Goodwin were the only players unable to practice on Wednesday. Both players sat out with groin injuries.

Taylor played just three snaps against the Giants as he was unable to play through his injury. Goodwin's is a new addition to the report.

--Linebacker Nick Bellore was fully back to practice after missing Sunday's game with a concussion.