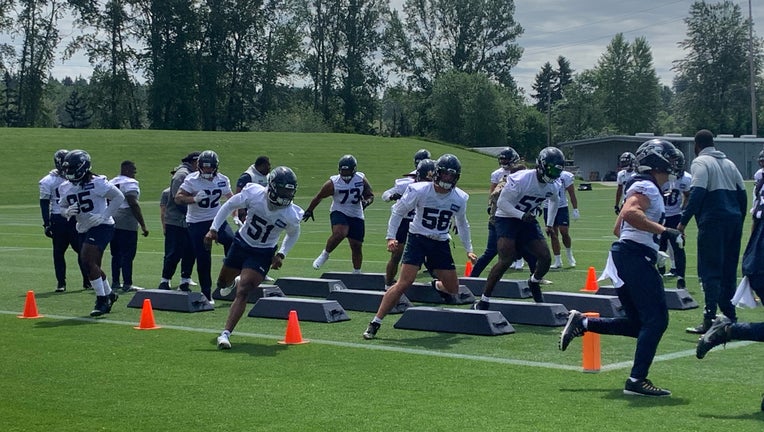 Seahawks linebackers Joel Iyiegbuniwe (No. 51) and Tanner Muse (No. 58) work through bag drills with the rest of the defense at OTAs at the Virginia Mason Athletic Center on May 23, 2022. (photo by Curtis Crabtree / FOX 13 Seattle)

RENTON, Wash. - The Seattle Seahawks were on the practice field on Monday in front of reporters for the first time with veterans and rookies together at the same time.

There was no Russell Wilson, no Bobby Wagner. There are no players remaining from the Seahawks teams that made it to back-to-back Super Bowls with one championship in 2013 and 2014. Instead, it was Geno Smith and Drew Lock at quarterback, and Jordyn Brooks and Cody Barton at linebacker as the Seahawks fully shift into a new era.

But while there are many questions for the 2022 Seahawks to answer, this stage of the offseason makes it difficult to find much in the way of answers.

"It’s really fun to finally get out here, put the helmets on, and kind of play fake football," head coach Pete Carroll said.

The Seahawks can't line up in full 11-on-11 drills during this phase of offseason work. The amount of contact is highly regulated with the team getting fines and losing draft picks in the past for pushing the line too far.

They are also voluntary workouts until next month's mini-camp and many veterans were not in attendance for Monday's sessions. Some – such as DK Metcalf, Jamal Adams, Marquise Blair and Tre Brown – remain away as they recover from offseason surgeries. Some others were away for personal reasons or taking advantage of the "voluntary" aspect of the workouts.

Without any players from the Super Bowl teams left, there is a void for new players to step up as leaders.

"Every year the team takes on kind of a new makeup and it comes from the personalities of the players and the leadership," Carroll said. "The leadership has shifted a little bit and that’s obvious, so it feels, just as it is, it’s a new season, a new team, and here we go. It’s fun to watch take shape and see the guys' step into the roles, they’ll be much more of that once we get to camp and rolling."

Brooks will take over calling plays on the defensive side of the ball with Wagner no longer in the middle of Seattle's defense. While it's something he hasn't done yet with the Seahawks, it was a role he handled in college at Texas Tech.

"You really got to know what's going on," Brooks said. "You’ve got to know the call, and you’ve got to be able to project your voice into the huddle where everybody knows. That’s when the field goes crazy, it's hard to hear. And so we’re kind of getting that simulation here in practice, with the music and everybody's talking around the sidelines. Just try to project my voice into the huddle. So everybody hears the call and we are all on the same page."

Added Carroll: "He’s feeling it, there is an example of a guy that is feeling the opportunity. He knows that he’s in front, he knows that he has to call the shots, and he’s going to make the adjustments, he and Cody (Barton) in particular. Both of those guys are engaged with this level of communication that positions them to leadership. It’s fun to watch and I can tell that they are really accepting that challenge."

The competition at quarterback between Smith and Lock won't really be able to ramp up until they can get more real in practice in training camp settings. For now, Smith has the advantage due to his familiarity with the offense. But Lock is making progress in getting up to speed.

"He’s right with us," Carroll said. "Geno really has the package nailed, so I have that to gauge him on. He’s hanging with Geno throughout all of this, and we are not holding anything back, we really just unloaded the installations, he’s doing well." 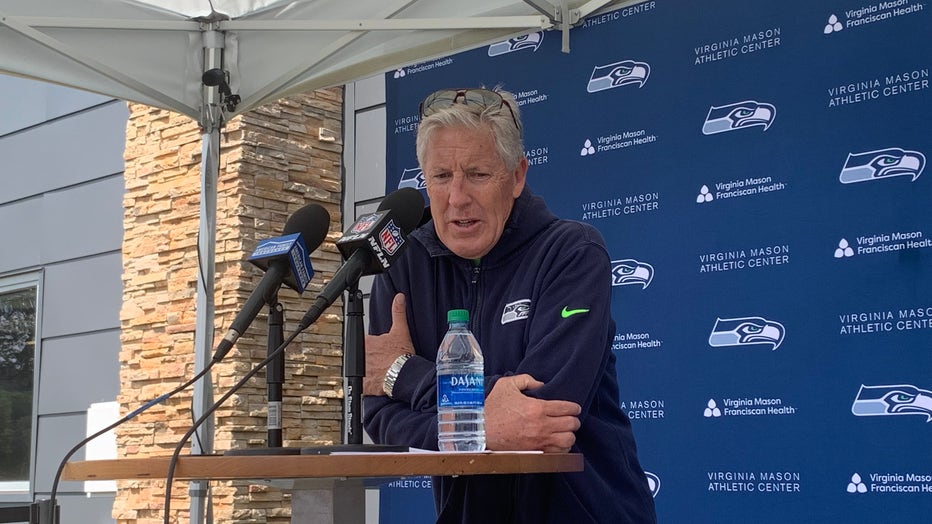