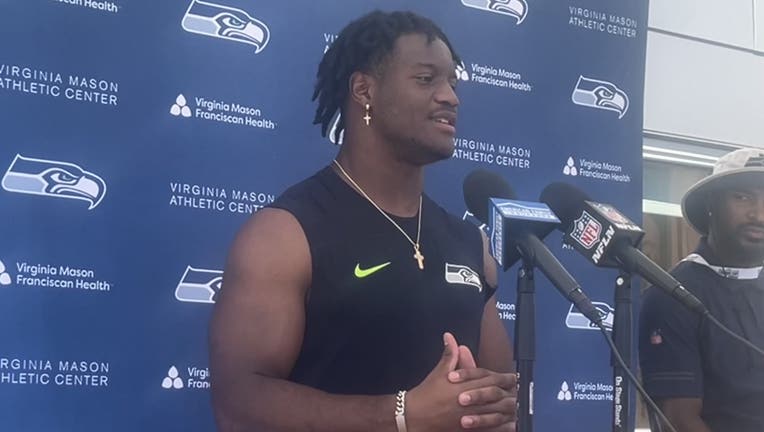 RENTON, Wash. - The Seattle Seahawks continue to ramp up their work in practice ahead of their mock game scrimmage on Saturday at Lumen Field.

Wednesday was the team's second day of practice in pads and it came with some fairly heavy hitting and a couple minor scuffles. The most pronounced of which was a hit delivered by safety Bubba Bolden on running back Travis Homer in the latter stages of practice. Bolden happened to connect with Homer as he turned up field after a catch. The hit was rather significant and sparked the ire of fellow running back DeeJay Dallas, who immediately ran in to the fray to confront Bolden.

Dallas would leave the practice field soon after. It was unclear whether he was injured in the scrum or if he was sent off for escalating the situation. The scuffle was dispersed rather quickly.

"The offense won yesterday so we feel like today, defensively, we had to get a little revenge. We came out here to be physical today," linebacker Uchenna Nwosu said of the practice's intensity.

It was also the most successful day for the offense, which had struggled through the first few days of camp.

Both Geno Smith and Drew Lock had solid days at center as Smith remains solely with the first-team offense.

"We have a plan there," offensive coordinator Shane Waldron said of the quarterback reps on Tuesday. "There are also a lot of different things with the walkthroughs and everything we have going. There have been a few scenarios out here where there has been some overlap. We are just going with our plan here of evaluating those guys and evaluating everything that they are doing.

"Right now, the way that it has worked out, Geno (Smith) has been a little bit more with the one’s than Drew, but there is some mixing and matching going on and we will continue to do that throughout camp and until the time that we make the decision."

Lock had a great touchdown pass to Dallas, a completion to Marquise Goodwin on a slant, and a touchdown pass to Bo Melton – on a play that may have been a sack from rookie Josh Onujiogu – that beat safety Scott Nelson.

Meanwhile, Smith closed practice strong with a perfect throw to DK Metcalf despite tight coverage from Tariq Woolen. He hit Tyler Lockett for a pair of completions and a final throw to Metcalf on the last play of practice.

Cornerback Sidney Jones also left practice in the closing stages. Woolen spent most off the day at right cornerback with Burns out, though Coby Bryant got a little time there as well. Bryant took over for Jones in his absence. Bryant has predominantly been on the left side with Woolen on the right.

Head coach Pete Carroll remains away from the team as he recovers from a positive case of COVID-19. He has been participating and watching practices remotely while isolating from the team for the mandated five days.