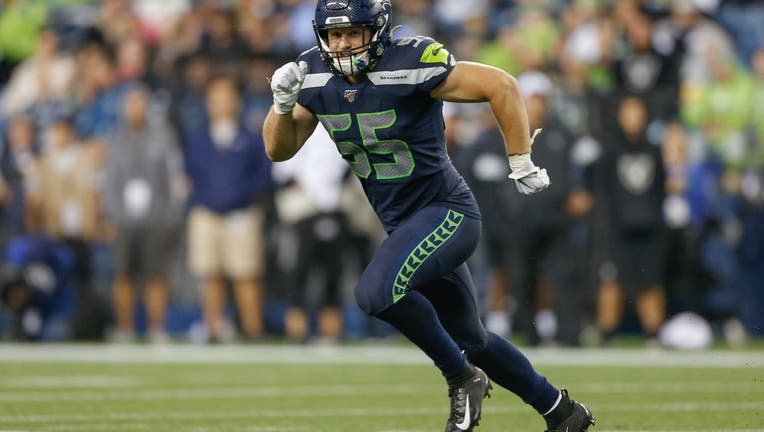 SEATTLE, WA - AUGUST 29: Linebacker Ben Burr-Kirven #55 of the Seattle Seahawks in action during the preseason game against the Oakland Raiders at CenturyLink Field on August 29, 2019 in Seattle, Washington. (Photo by Otto Greule Jr/Getty Images)

The Seattle Seahawks waived linebacker Ben Burr-Kirven due to a failed physical as part of a handful of roster moves with training camp set to open on Wednesday.

Burr-Kirven sustained a torn ACL in his knee during a preseason game last August. He was unable to get back on the field during offseason workouts and had a follow-up procedure performed in June. The move Tuesday indicates Burr-Kirven is still not recovered enough to help in the near future. If he clears waivers, he will move to Seattle's injured reserve list.

Smith suffered a patella tendon injury last November after a strong start to his rookie campaign. Rhattigan had an ACL tear sustained in December.

Ryan had an ankle injury during offseason workouts and was in a walking boot throughout most of OTAs. Smith's injury is undisclosed.

Players on the physically unable to perform list still count against the team's 90-man roster limit. However, players become ineligible for the list once they pass a physical, so they must be placed on the list at the start of training camp if they are unable to participate to preserve roster options. Players can come off the PUP list at any point during the preseason if they pass a physical.

The releases of Burr-Kirven and Carson have Seattle with three open roster spots ahead of the start of camp on Wednesday. The team is reportedly signing tight end Jake Hausmann, per Doug Kyed of Pro Football Focus, to fill one of those three vacancies.

Via Jeremy Fowler and Brady Henderson of ESPN.com, Seahawks wide receiver DK Metcalf has reported to the team for the start of training camp.

Metcalf held out for the team's mandatory mini-camp back in June as he discusses a new contract with the team. Metcalf has one year left on his rookie deal with the team.

Metcalf is set to earn $3.9 million in the final year of his contract. However, the top of the wide receiver market has jumped significantly this offseason with Tyreek Hill ($30 million/year), Davante Adams ($28 million/year), and college teammate A.J. Brown ($25 million/year) getting new contracts. Metcalf's numbers are deserving of joining that echelon as well.

"We've been through this for years, you know," Carroll said of negotiations in June. "And it's a challenging time. You know, we've had so many high-profile guys that have gone through this process and how's that worked out for us? You know, we figured it out in time. And so Johnny was on it and he's as experienced as you can get at handling this stuff and DK's got great representation and DK is a heck of a kid.

"He's a remarkable person and he's a wonderful player. He has so much to offer the world and I just don't want him to miss this opportunity where we can't figure it out. So we'll do everything we can."

Strong safety Jamal Adams reported to camp in similar fashion last year. However, Adams did not take part in practices until his new contract was completed. The NFL's collective bargaining agreement penalizes holdouts far more than in the past. Under new CBA, if a player in the final year of his rookie deal doesn’t report, his season doesn’t accrue toward free agency. That would make Metcalf a restricted free agent after the upcoming season instead of an unrestricted free agent.

Metcalf could walk a similar path until his new contract in reached as well.